But gunmen stay of the streets after Sands dies

Belfast, 5 May – Mobs of youths poured into the streets of Belfast early today to protest violently about the death of Bobby Sands.

Just before 2 am the youths unleashed a wave of violence, engulfing police and army patrol vans in volleys of petrol and acid bombs, bricks and iron bars. 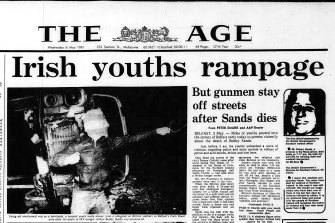 Front page of The Age first published on May 6, 1981.Credit:The Age Archives

They filled the streets of the city’s Roman Catholic areas after word spread that Sands, 27 —member of the House of Commons for the Northern Ireland electorate of Fermanagh and South Tyrone — had died after a 66-day hunger strike.

But few Protestant or Catholic gunmen were seen in the riots.

When the fighting died down soon after dawn, a 20-year-old man had undergone emergency surgery for a bullet wound and the driver of a milk float and his assistant had suffered serious injuries when their float crashed into a lamp post after it had been stoned. About a dozen cars and buses were hijacked and set alight.

Sands was the 13th Irish Republican to die in a hunger strike this century. His body will be taken from the Maze prison on the outskirts of Belfast today and will “lie in state” for three days while Republicans queue to pay homage to his memory.

The funeral that will follow is expected to be attended by hundreds of thousands of Republicans from all over Ireland, South as well as North.

Ominously, the funeral may well coincide with the death of a second hunger striker in the prison, 25-year-old Francis Hughes, whose condition continues to deteriorate quickly.

Britain was put on a nation-wide security alert today following Sands’s death. The moment news of his death was flashed from the Maze prison a secret plan to thwart terrorist reprisals was set in motion.

Every police station in the country was in readiness for a possible bombing campaign or assassination attempt.

People on a list of potential targets, including top politicians and members of the Royal family, were under special guard. Extra police units were patrolling government and other prominent buildings.

Anti-terrorist detectives have known for weeks that the IRA could use Sands’s death as an excuse to launch renewed attacks on the mainland. Police in London, Birmingham, Glasgow, Liverpool and other areas with large Irish populations were being especially vigilant.

In Oslo, a person protesting over Sands’s death threw something at the Queen today as she arrived for a four-day State visit.

“Whatever it was, it missed, and something like tomato ketchup landed on the ground nearby,” said a witness.

The Queen did not appear to notice, and may not have heard the “Bobby Sands” chants from a tiny knot of protesters among the cheering crowd of thousands.

This morning’s Belfast violence was confined to attacks mainly on security forces. There was no movement towards the Protestant areas across the brick wall and wire fence “peace line” which epitomises the religious and tribal division in the community.

Sands’s family was with him when he died at about 1.15 am, (10.15 am Tuesday Melbourne time). He had been in a coma for two days after refusing to call off his fast, despite a plea from the Pope’s personal secretary, Monsignor John Magee, and after having refused to meet commissioners of the European Human Rights Commission who had flown from Strasbourg.

The Prime Minister of the Irish Republic, Mr Charles Haughey, said he was saddened that the death had not been avoided by “a more flexible approach to the administration of the prison”.

Sands and three other hunger strikers undertook their fasts in a bid to obtain changes in prison rules regarding clothes and prison work. The British Government has resisted the changes because it says they would be tantamount to granting political status to the IRA prisoners.

The consequences of Sand’s death are unpredictable. In this morning’s rioting, only youths between 12 and 20 seemed to be involved. The gunmen were not on the streets.

It is now known that a meeting of five Loyalist (Protestant) paramilitary groups has decided that no offensive action against Catholic areas should be taken, and no action should be taken involving any Protestant area unless it was plain that police and army forces could not cope.

This decision is being seen here as a bid to frustrate the IRA in its wish to raise the level of violence in Ulster and so raise the price which the British Government must pay to maintain Ulster as pan of the United Kingdom.

Belfast in daylight today was tense and confused. Helicopters and light planes whirred overhead and there seemed to be an armed policeman on every corner.

When the news of Sands’s death reached the Europa Hotel, headquarters for the hundreds of journalists from all over the world who have poured into Northern Ireland in recent days, convoys of Press vehicles raced into West Belfast.

Reporters found police and army patrols huddling in their armored vehicles, while from dozens of side streets bands of 20 or 30 youths rained missiles on them.

The security forces used their vehicles as battering rams to knock down attempts to raise barricades at street entrances and so create “no-go” areas.

But after three hours of rioting the city calmed. The streets were covered with broken glass, rocks, sticks, iron bars and garbage.

The youths had been brought on to the streets by the beating of dustbin lids — the traditional Catholic tom-tom of disaster in West Belfast.

But the absence of the IRA’s head man gave credence to Republican statements that the three days of Sands’s “lying in state” should be observed as a time of calm sorrow.

Whether this tactical plan will prove possible is another matter. Most violence in Ireland begins with a small incident and then conditioned reflexes take over.

The spokesman said the Republican movement had not wanted Sands’s death and had advised against the hunger strikes. “But at the end of the day, the men in prison make their own decisions,” he said.

Mr John Hume, leader of the moderate Social Democratic and Labor Party, claimed that everyone but “the ordinary people of Northern Ireland” had wanted Bobby Sands to die.

“The ordinary people know what pressures have gone into the making of a Bobby Sands and they know what terrible results may come from his death, but they wanted him to live,” Mr Hume said.

The Reverend Ian Paisley, leader of the Democratic Unionists, said Sands had made a deliberate choice to die. “I would be a hypocrite if I said I was sorry Sands is dead. My sorrow is for the innocent victims. Sands chose to die but the IRA’s victims have no choice.”

Meanwhile, there is a row over allegations that some European photographers have paid youths in Catholic areas to throw missiles at security forces, then photographed the results. The charges are made particularly against several French photographers, who claim they are false, although there have been bitter disputes about ethics among photographers here.

At a meeting in the Europa Hotel last night photographers agreed not to continue taking pictures in any one area for more than about 10 minutes. There was broad accord that the lengthy presence of television and Press cameras tends to intensify violence in Northern Ireland.

In Moscow, the Soviet news agency Tess announced the death of Bobby Sands a few hours after he died.

“In contempt of numerous protests from world opinion, the British Conservative Government re fused to satisfy the demands of Robert Sands and his colleagues, and so determined his death,” the agency said in a short report from London.

British police were expected to keep a close guard on members of the Royal family who were making public appearances today: Princess Margaret visits Sadler’s Wells in London, the Duchess of Gloucester goes to Reigate in Surrey and the Duchess of Kent is in Cambridge.