A month after Nepal held landmark post-war general elections, anger is growing over a delayed transfer of power. 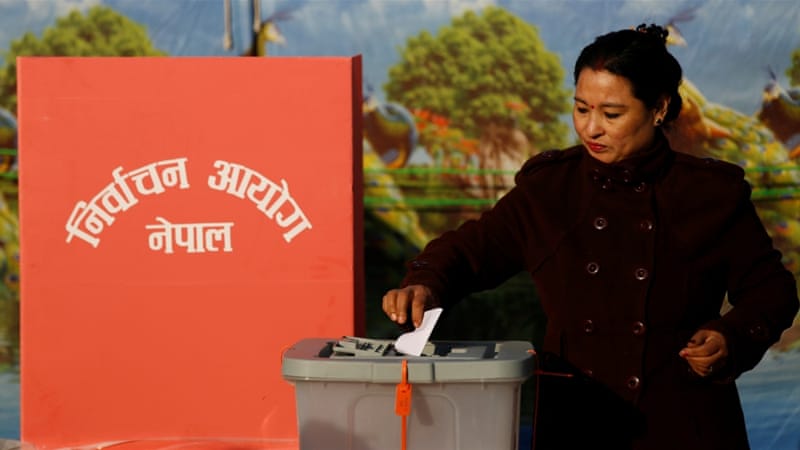 Students in Nepal have been taking to the streets to demand the outgoing government swiftly hand over power to a leftist alliance that swept to victory in national elections last month.

The landmark post-war poll had raised hopes that it would bring much-needed stability to the impoverished country. Yet, several weeks after the defeat of Prime Minister Sher Bahadur Deuba’s Nepali Congress, elation has given way to frustration as Nepal remains caught in a political deadlock.

With the establishment of a new government still not in sight, protesters have been rallying for days in the capital, Kathmandu, to call for Deuba’s immediate exit.

But with that vote still several weeks away due to a number of administrative issues, critics accuse Deuba’s party of deliberately stalling for time to break up the leftist coalition in a bid to maintain its grip on power.

On Friday, the protesting students gathered in front of the parliament under a heavy police presence, chanting slogans such as “Caretaker government must go”. Also angered by a rise in fuel prices, on Thursday they burned effigies of Deuba and clashed with riot police outside a government school in Kathmandu.

The hold-up “undermines and poses a threat to democracy in Nepal”, Nabina Lama, one of the organisers of the student protests, told Al Jazeera, vowing to continue protesting until Deuba stepped down.

The alliance of the two leftist parties – the communist UML and former Maoist rebels, led respectively by former prime ministers, KP Sharma Oli and Pushpa Kamal Dahal – won a vast majority of seats in the lower house of parliament in the November and December vote.

It also won a majority in six out of the seven newly created state assemblies at the provincial elections held at the same time.

Nearly 70 percent of some 15 million eligible voters turned out to vote in the two-phase vote, some walking for hours in the snow in remote Himalayan villages to cast their ballots.

“I voted, like millions of others, with lots of excitement and jubilation,” said Akhilesh Upadhyay, editor-in-chief of the Kathmandu Post, a Nepali daily newspaper.

“But now, I am deeply frustrated about how the transfer of power has taken forever. There’s a huge sense of disappointment among the voters, including myself.”

The polls marked a turning point for Nepal, a landlocked country between China and India, raising expectations that they would usher in an era of economic growth.

The poor Himalayan nation emerged from a bloody civil war in 2006. Two years later, it abolished its 239-year-old Hindu monarchy in favour of a federal republic.

After long and contentious delays, a new constitution was adopted in 2015, only to trigger deadly protests in the country’s southern plains, with the Madhesi ethnic minority rallying against alleged discrimination in the new charter.

The extended period of instability produced 10 government changes in as many years, and affected recovery from a devastating earthquake that killed more than 9,000 people in 2015.

Ram Chanda Poudel, a senior official in the Nepali Congress, which assumed power in June 2017 under a power-sharing deal, said the government would step down after it completes several transitional steps outlined in the Constitution.

These include the appointment of governors to the seven newly-created provinces and the election of the National Assembly, the parliament’s Upper House.

“The Nepali Congress has no intention of sticking to power forever. There will be a peaceful transfer of power once due processes are completed,” Poudel told Al Jazeera, without offering a timeframe.

The leftist alliance, however, said the Congress lacked the mandate to oversee such decisions.

“The government’s days are numbered, yet Deuba has been making several important appointments that carry long-term consequences,” said Pampha Bhusal, a spokeswoman for the coalition.

“This is not acceptable to us. We will revoke all decisions that were made without our consensus.”

Upadhyay, the newspaper editor, said there was “a hidden agenda” to the delay, which he stressed was legal because of “grey areas in the Constitution”.

He said the longer the transfer of power takes, the Maoists, who are the leftist coalition’s junior partners, “may consider shaking hands with Nepali Congress and other parties, abandoning their leftist alliance and UML and form a government”.

Just last week, Congress officials said they were ready to join forces with the Maoists in a government headed by Dahal, the leader of the former rebels, according to the Kathmandu Post.

Dahal, however, responded on Thursday by saying that he has “not even imagined becoming prime minister at the cost of the left alliance”, according to Republica, another Nepali daily.

Aditya Adhikari, a Kathmandu-based political analyst, said he was not surprised by the parties’ manoeuvring.

“The Constitution has a very complicated set of rules about how a new government can be formed,” he said, noting that due process must be followed.

“The Congress is following that process, while also trying to extract favourable conditions for itself,” added Adhikari.

“I’m not in favour of the government dragging its feet on the issue. But I think it sets a bad precedent if the steps aren’t followed.”

The delay, meanwhile, has not only angered the alliance’s supporters.

Monika Baral, a Nepali Congress voter, said the hold-up reinforces the idea that Deuba “is completely out of touch with the public”.

“The government’s failure to connect with the general public is the main reason why it lost the election,” the 30-year-old, who is from Pokhara, Nepal’s second-largest city, told Al Jazeera.

“The longer Deuba stays in power, the bigger the price for the Nepali Congress.”