Fans of an ‘iconic’ mural of the Joy Division frontman Ian Curtis have been left outraged after it was painted over with an advert for Aitch’s new album.

The mural, which was painted on the side of a building on Port Street in Manchester’s Northern Quarter, was seen being painted over on Tuesday.

Aitch, who is releasing his debut album ‘Close to Home’ later this month, took to social media to reassure his fans that he had no involvement in the repainting of the mural.

The Manchester-born rapper, 22, said he became aware of what happened on Wednesday morning and was ‘getting this fixed pronto’ after an outpouring of anger.

Aitch tweeted: ‘It’s come to light that the iconic Ian Curtis mural on Port Street has been painted over with my album artwork.

‘This is the first time I’ve heard of this, me and my team are getting this fixed pronto.’

‘No way on earth would I want to disrespect a local hero like Ian,’ he added. 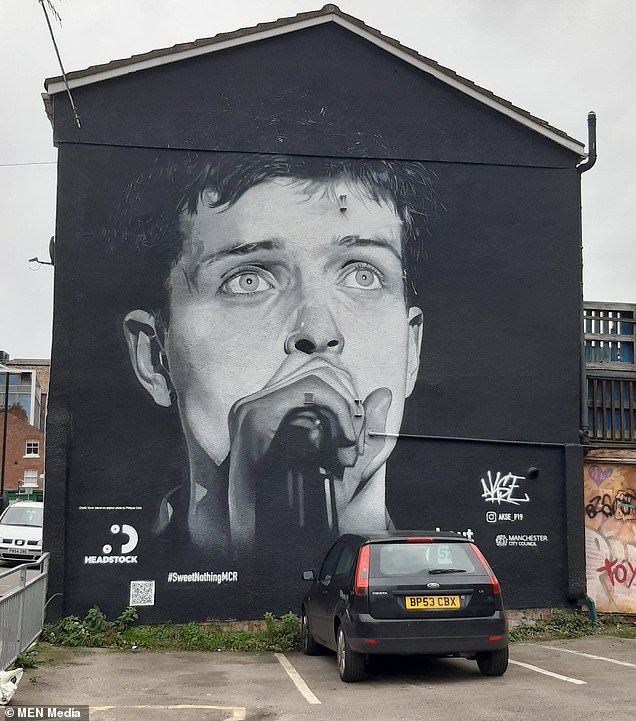 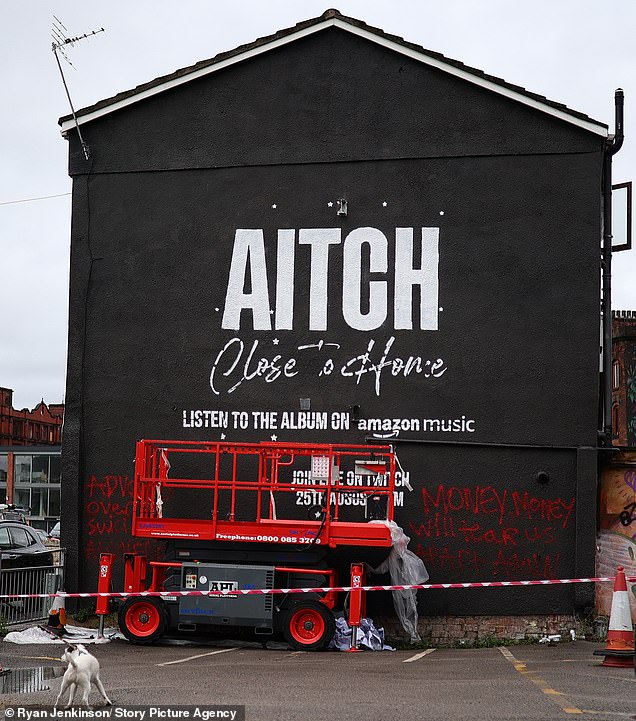 The original mural of Ian Curtis (pictured left) was painted over with an advert for Aitch’s upcoming album (right) on Tuesday, prompting an outpouring of anger

In a separate tweet, Aitch, from Moston in north Manchester, said he does not ‘choose locations for billboards’ and ‘this is the first time I’ve seen it myself. Getting fixed as we speak’.

Joy Division bassist Peter Hook thanked Aitch for his response and said it was a ‘great gesture’.

Mayor of Greater Manchester, Andy Burnham, responded by saying ‘it should never have happened’ and said Aitch ‘shouldn’t have been put in this position’.

‘Ian is a true icon of our city. He must be fully restored and left in his place for time in memoriam. Thanks to everyone for showing what Ian means to us,’ he tweeted. 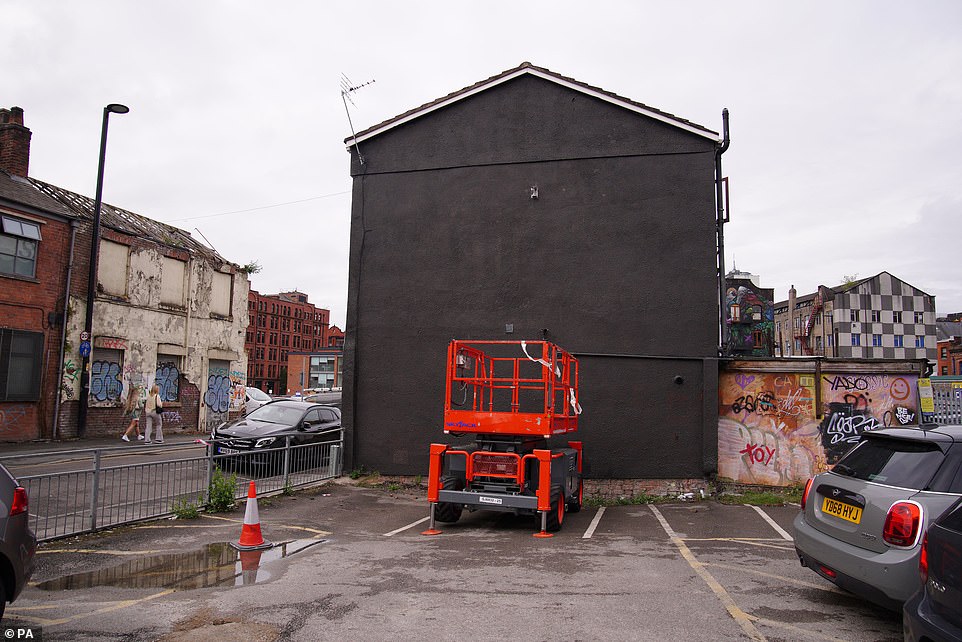 Work on restoring the Ian Curtis mural on Manchester’s Port Street has now begun, with Aitch’s advert being erased 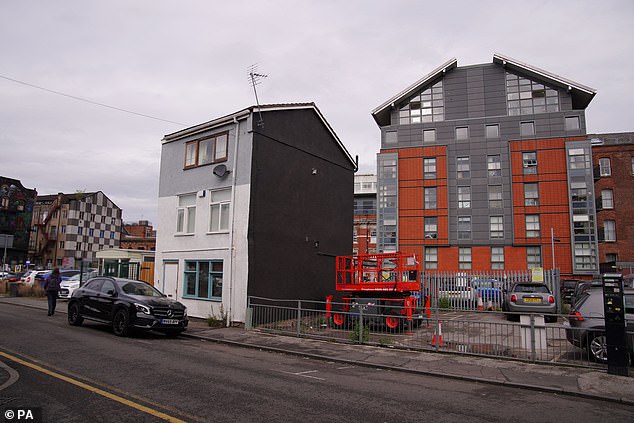 Work on restoring the mural has now begun, with Aitch’s advert being painted over.

However, many people were furious after discovering the mural, which was originally been painted in 2020 to mark a mental health music event in Manchester, had been erased.

The artist behind the Ian Curtis mural, Akse P19, hit out at the repainting saying that the original ‘had become a cultural landmark and meant so much to people form Manchester and beyond’.

In an Instagram post, he continued: ‘It doesn’t take much common sense to understand that this mural should have remained for what it represented and stood for”, after stressing it had been painted to raise awareness for mental health.

Peaky Blinders director, Anthony Byrne, said: ‘This is such a stupid move but unsurprising.

‘The Ian Curtis mural should be reinstated and left there permanently. If there’s someone to contact and petition regarding this let me know.’

Headstock Festival, the mental health and wellbeing event the mural was in aid of, said: ‘Absolutely gutted to see our Ian Curtis mural painted over.

‘Such a shame when @AmazonMusicUK had pretty much any other wall in Manchester to choose from.

‘Especially when it was created [email protected] to raise mental health awareness in support of @GiveUsAShout.’ 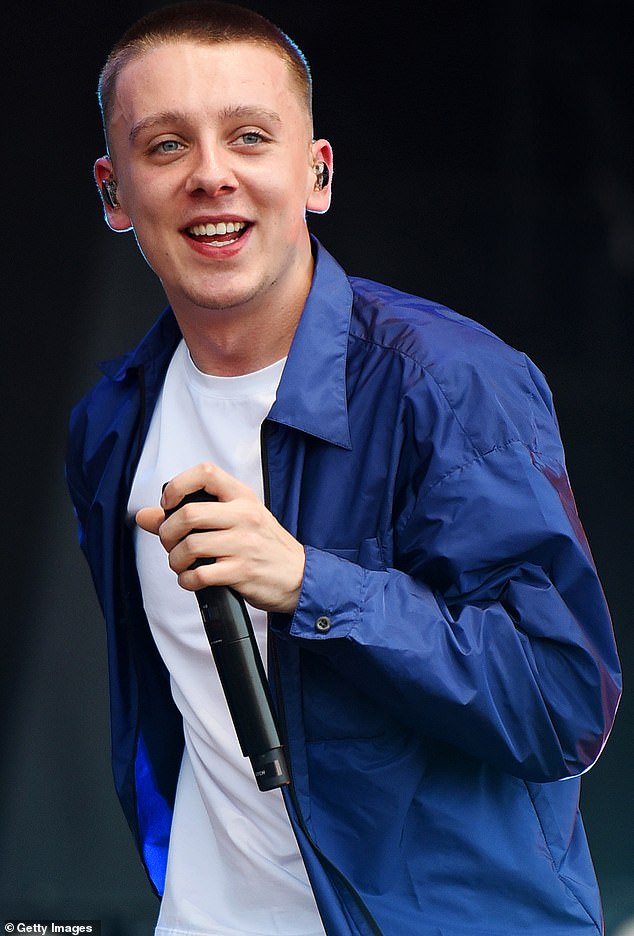 Manchester-born rapper Aitch, 22, denied any involvement after a mural of Ian Curtis was painted over, saying ‘no way on earth would I want to disrespect a local hero like Ian’

Another person said: ‘Absolutely disgusted to hear the @akse-P19 Ian Curtis mural in Manchester has been painted over.

‘It isn’t important what has replaced it but simply that it has been replaced.

‘This should have been a tribute to a legend for as long as that building remained. Angry ain’t close.’

Others lamented the removal of the mural, saying it was a ‘stunning piece of art’ and the ‘ad could’ve gone anywhere’.

Labour councillor and city centre spokesperson Pat Karney told the Manchester Evening News: ‘People will have wanted this mural to stay there for a few more years, and my view is that the artwork should have stayed there too.

‘If it is being replaced by an advert, they can be displayed anywhere around the city.

‘Of course, we are proud of Aitch as another artist from Manchester who is successful, but many people will be upset by this.

‘Personally, I felt it was such a special piece of artwork. But at the same time, nothing is permanent and musical culture is always changing.’