Gang of teenage gatecrashers caused more than £20,000 worth of damage when they trashed a 14-year-old girl’s home and caused the kitchen ceiling to collapse while her parents were out 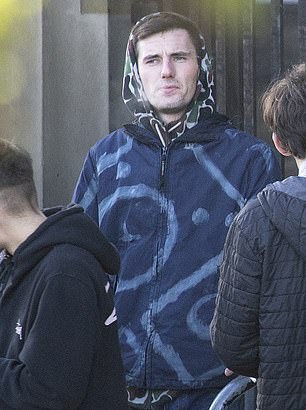 Connor Goodfellow, 18, pictured, admitted being part of a gang who trashed a 14-year-old girl’s home in Luncarty, Scotland, including flooding the bathroom which caused a kitchen ceiling to collapse

A gang of six teenage gatecrashers caused more than £20,000 in damage to a schoolgirl’s house after trashing it while her parents were out.

The house was so badly damaged that the family were forced to move out while extensive repairs and a massive clean-up operation were carried out.

A court heard how the gang – aged from 15 to 20 – caused chaos after turning up to the 14-year-old girl’s party uninvited and rampaging through the family home in Luncarty, Perthshire.

Connor Goodfellow, now 18, deliberately flooded an upstairs bathroom and caused the kitchen ceiling to collapse, which cost more than £3,000 to fix.

The girl told Perth Sheriff Court that Goodfellow also pulled a knife on her when she tried to throw him and his friends out of her home.

She said: ‘He had a knife. It was hanging out of his waist. It was from the kitchen. I could see the handle and a bit of the blade.

‘When I asked everyone to leave the majority did, but him and Stephen Donavan wouldn’t.

‘I told them to leave and kept repeating it, and he said if I asked him to leave one more time I was going to get it – then he got the knife out.

The girl, who is now 16 and cannot be named for legal reasons, told a trial of six accused at the court Goodfellow had been ‘laughing sarcastically’.

After a break in proceedings, Goodfellow, of Cowdenbeath, changed his plea to admit maliciously flooding the bathroom, breaking taps, and causing damage to the kitchen ceiling.

Co-accused Jordan McLean, 18, of Perth, changed his plea to admit damaging the bannister and causing more than £600 damage during the wrecking spree on 16 July 2016.

Donavan, 23, Dean Christie, 19, Ben Whyte, 18, and a 17-year-old youth, all from Perthshire, had the charge against them dropped as a result of the plea bargain.

But as they sat in the court waiting for Goodfellow and McLean the quartet were given a warning by Sheriff Lindsay Foulis.

He said: ‘The total damage caused in this incident was in excess of £20,500. I have little doubt at the end of the day that these two are effectively the fall guys.

‘This was a deplorable escapade. It is over two years ago and it is not surprising that the girl whose parents’ house you trashed can’t remember a great deal.

‘As a result you are effectively taking responsibility for what she remembers you doing, and the others walk free. I have little doubt that those who were previously sitting beside you in the dock were responsible for what occurred.

‘I don’t want the others to think this was a big jape and a joke. Frankly it’s a disgrace. I want to make that plain to you and your former co-accused.’ 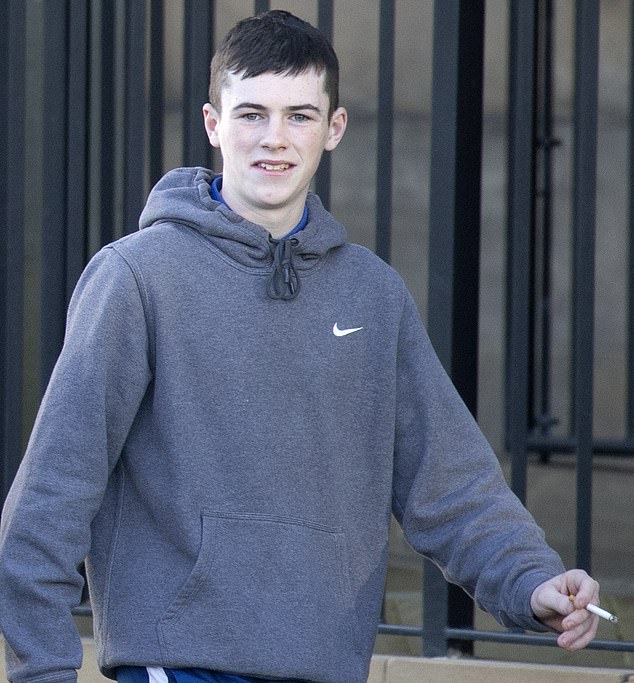 Jordan McLean, pictured, also admitted damaging a banister and causing around £600 in damage at the property

Fiscal depute Michael Sweeney said an insurance company had paid out £20,500 to repair the damage.

The court heard how the gang smashed mirrors, flooded floors, hurled flour around floors and furnishings, kicked in a shed, threw food and threw drinks around the whole house.

They also kicked holes in the walls, ripped a shower curtain, broke furniture with a golf club, slashed walls and doors with a knife, damaged a garden bench and broke a record deck and a freezer.

The girl had been out with friends and had invited them back to her home while her parents were out and the six accused had arrived and caused chaos.

Goodfellow and McLean had sentence deferred for the preparation of social work reports.

The girl’s mother said the full cost of the damage had amounted to £22,000 but she declined to comment further.