Germany is facing a second coronavirus wave if it does not tackle new outbreaks quickly, virologist warns

Germany will face a second coronavirus wave if it does not quickly tackle new outbreaks which have risen across the country, a top virologist has warned.

Christian Drosten, Director of the Institute of Virology at the Charité Hospital in Berlin, said he was deeply troubled by recent spikes, such as ata meat plant in North Rhine-Westphalia.

‘I am not optimistic that in a month’s time we will still have such a peaceful situation as we have now in terms of epidemic activity,’ Drosten said on his NDR podcast.

‘In two months, I think we’re going to have a problem if we don’t turn on all the alarm sensors again now.’ 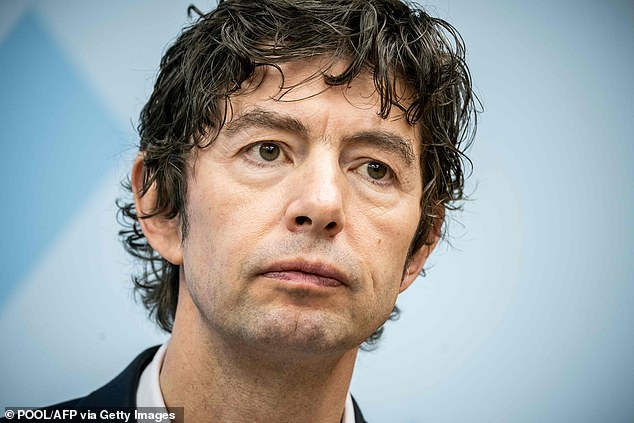 ‘I am not optimistic that in a month’s time we will still have such a peaceful situation as we have now in terms of epidemic activity,’ Drosten said on his NDR podcast. ‘In two months, I think we’re going to have a problem if we don’t turn on all the alarm sensors again now.’ 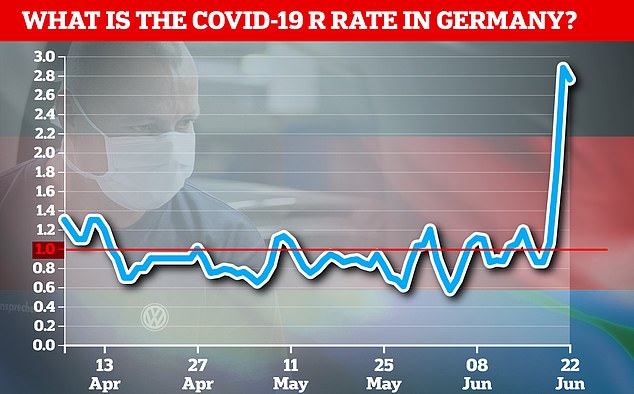 Germany’s R rate has ballooned to 2.76 following a series of local outbreaks, far above the level of 1.00 which signals that the contagion has stopped accelerating

Dorsten urged the public to give their support to health authorities and continue sticking to the social distancing guidelines.

He referred to the southern states of the USA which he said were facing a ‘terrible situation’ because of premature lockdown easing.

Yesterday Germany ordered 640,000 people back into lockdown after a coronavirus outbreak at a meat factory caused a spike in the R rate – dealing a major setback to a country widely praised for its handling of the pandemic.

More than 1,500 people have tested positive at the Toennies slaughterhouse since last week and the districts of Guetersloh and Warendorf have now become the first in Germany to enter a second lockdown.

Bars, gyms and cinemas have shut again while picnics and barbecues have been banned, schools are already closed and the 10-person limit on public gatherings has been slashed to two.

The spike in cases has punctured optimism that Germany had successfully weathered the pandemic, after it was praised for keeping its death toll far lower than that in Britain, Spain, Italy or France.

Armin Laschet, the state premier of North Rhine-Westphalia, said the affected areas would return ‘to the measures that applied several weeks ago’ – turning back the clock to before Germany started easing the lockdown. 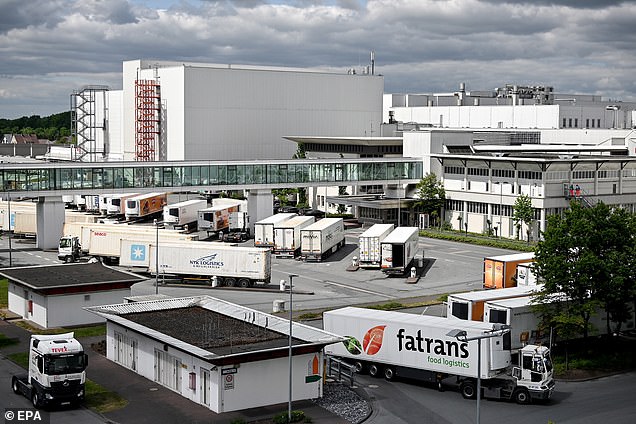 Health authorities have quarantined all 6,500 workers at the Toennies plant (pictured) and tested the entire workforce after the outbreak came to light last week 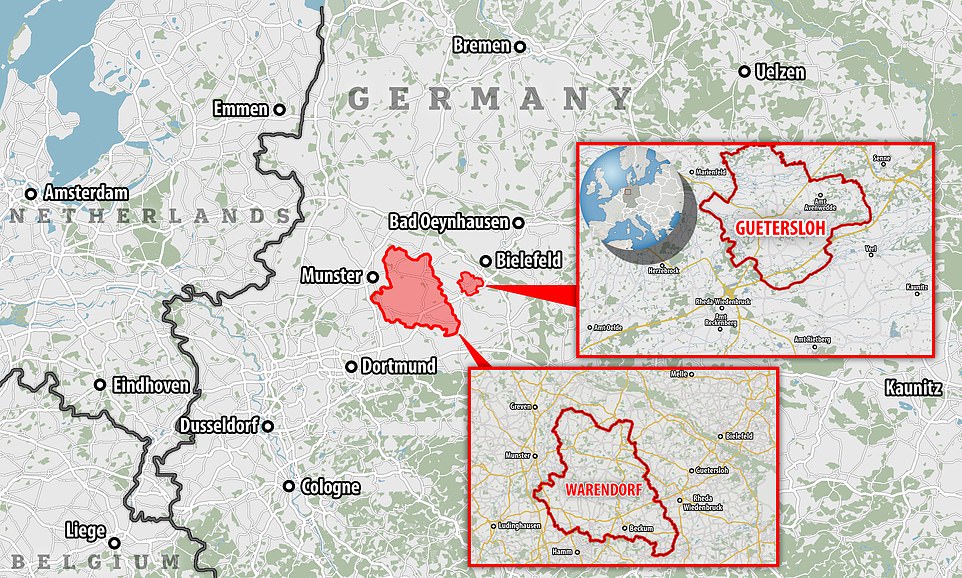 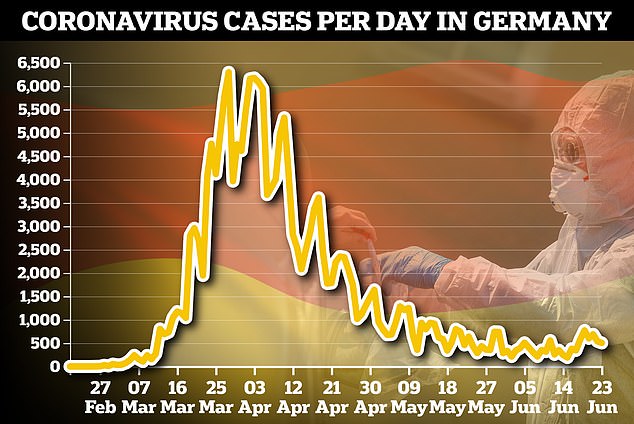 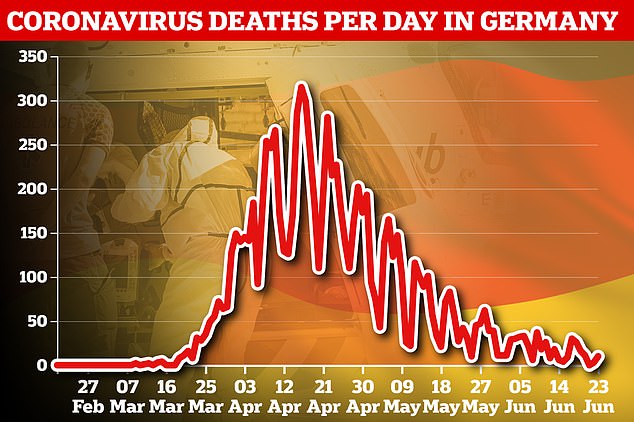 The spike in new cases has not yet been reflected in the death toll, which rose by only 10 yesterday – taking the total in Germany to 8,895

The meat factory is in Guetersloh, but Warendorf has also triggered an ’emergency brake’ after the number of cases rose above 50 per 100,000 in a seven-day period, under a threshold agreed by Angela Merkel.

Laschet also urged people to avoid travelling away during the week-long lockdown – although this will not be enforced – and holiday resorts elsewhere in Germany have already started turning away visitors from the area.

Health authorities had already quarantined all 6,500 workers at the Toennies plant and carried out tests on the entire workforce, with screening now set to be expanded to the whole area.

The plant’s billionaire owner Clemens Toennies, nicknamed the ‘Pig Baron’, has apologised for the outbreak amid claims that the crowded accommodation where many Eastern European migrant workers live may have contributed to the spread of the virus.

The Toennies cluster is the largest of several new outbreaks which have sent Germany’s R rate rising to an alarming 2.02, although health chiefs say the number is more likely to lurch around when the overall figures are low. The figure was 2.88 on Sunday and 2.76 on Monday.

The outbreak in Germany’s most populous state is the country’s biggest since it began lifting the lockdown in early May. 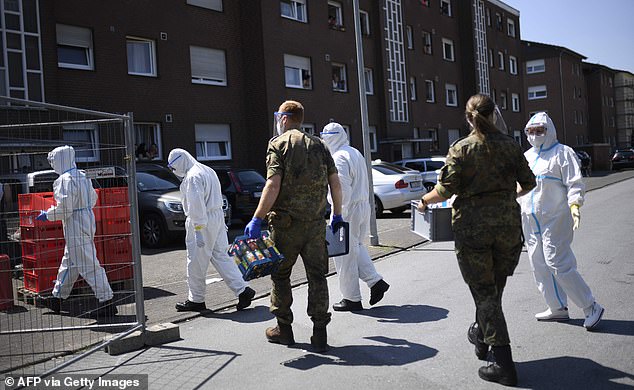 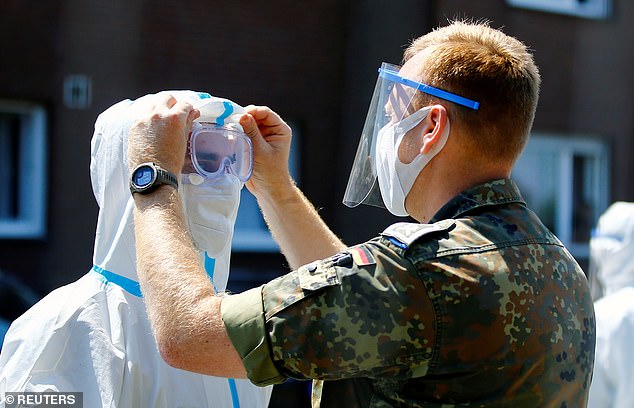 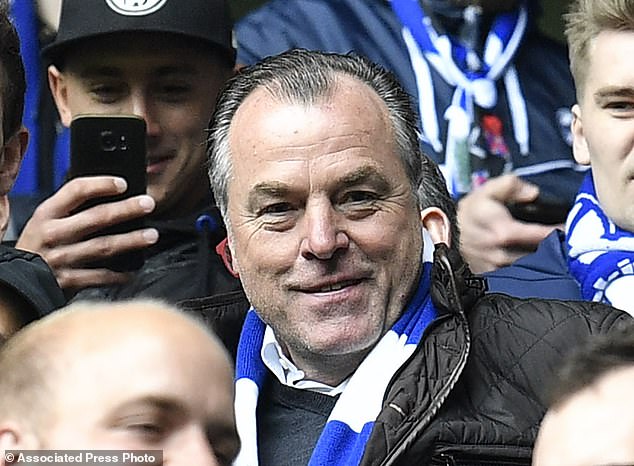 The plant’s billionaire owner Clemens Toennies (pictured), nicknamed the ‘Pig Baron’, has apologised for the outbreak and admitted that the firm has struggled to trace contacts

The infection rate in Guetersloh is 480 cases per 100,000 residents in the last week, while the figure in Warendorf is 257 – both well above the ’emergency brake’ threshold of 50.

As of Sunday, 21 people were being treated in hospital, six of them in intensive care.

‘This is a limited measure of caution. We will lift the measure as soon as possible, when we have certainty about the safety of the infection,’ Laschet told a news conference yesterday as he announced the return to lockdown in Guetersloh. ‘It is a preventative measure.’

Guetersloh residents will be offered free testing, Laschet said – with 24 infections identified so far that are not linked to the meat factory.

State officials subsequently announced that the lockdown rules would also apply to the neighbouring district of Warendorf.

Under the new rules, only two people from different households can meet at a time. The threshold is 10 people in the rest of the state or unlimited if only two households are involved.

The lockdown is initially in place for a week and could be lifted on June 30 if the situation has improved by then, although Laschet did not give details of how this would be measured.

The district of Guetersloh has around 360,000 residents, while the population of Warendorf is around 280,000. 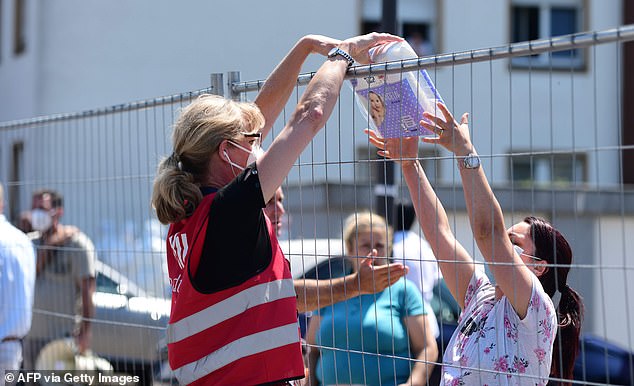 The move comes as Germany and the rest of the EU begin taking steps towards getting tourism up and running again, with many European borders reopening just last week.

Several planeloads of German tourists have flown to Mallorca in Spain to take part in a trial run for resuming the tourist season as the country emerges from its own lockdown.

But the latest flare-up prompted authorities on the German island of Usedom to turn away a couple who had travelled from Guetersloh.

The state of Bavaria has also announced that holidaymakers from Guetersloh will be turned away from hotels and guesthouses for the time being.

Clemens Toennies, who has an estimated net worth of $2.3billion, said on Saturday that the new outbreak was an ‘existential crisis’ for the company.

‘As a company we thought we had done everything right,’ he said, after operations were suspended because of the crisis.

‘As an entrepreneur I can only apologise. We have caused this and are fully responsible for it,’ Toennies said.

The outbreak has also prompted protests in front of the meat-packing plant calling for the closure of slaughterhouses across Germany.

State premier Laschet has previously linked the cramped working and living conditions among Toennies’ workforce to the spread of the virus. The low temperatures at the plant have also been suggested as  a possible cause of the crisis.

The company responded to criticism by announcing plans to improve working conditions at the plant, by giving its employees better contracts and providing them with more spacious accommodation.

Ansgar Puff, a bishop in nearby Cologne, condemned what he called ‘exploitation and slavery-like practices’ at meat-packing plants in Germany.

‘Migrants from Eastern Europe are misused as cheap labour in the middle of Germany and housed in inhumane dwellings. The exploitative employment in the meat industry is a scandal,’ he said. 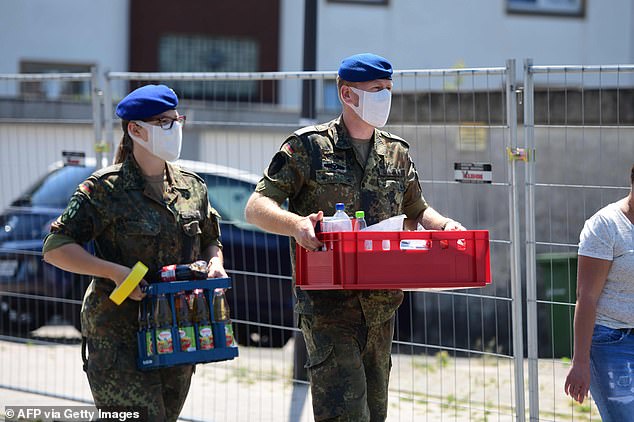 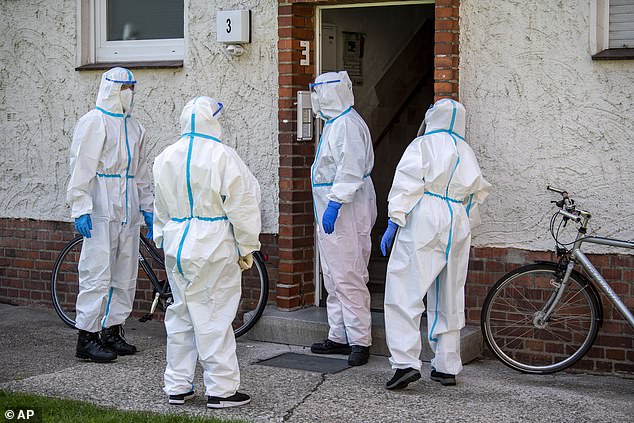 ‘Before the corona cases in the slaughterhouses, the topic was of little interest to the general public. It was just too easy for many to close their eyes.’

Germany’s labour minister Hubertus Heil has suggested that Toennies could have to pay damages for the outbreak.

‘We should examine to what extent the company bears civil responsibility’ for the outbreak and resulting lockdown, he told German television.

Anton Hofreiter, the parliamentary leader of the Green party, has said that Clemens Toennies should pay any such compensation out of his own pocket.

Local authorities are employing translators to help manage the quarantine and the embassies of Romania, Bulgaria and Poland have offered assistance.

China has already banned meat imports from Toennies, which is one of Germany’s largest meat producers.

The outbreak near Guetersloh was first reported last Wednesday, when 400 workers tested positive.

The entire workforce has been quarantined whether they tested positive or not, while health authorities carry out further screening on their households.

The German army has been deployed to help manage the quarantine while police distribute food to thousands of people in an accommodation block.

State premier Laschet has previously said he ‘cannot rule out a blanket lockdown’ in Germany’s most populous state.

Laschet has come under fire for suggesting that ‘Romanians and Bulgarians’ working at the plant were responsible for bringing the virus.

He later backtracked and acknowledged that the migrants’ poor working and living conditions in Germany may have contributed to the spread of the virus.

The Toennies outbreak is the largest of a handful of new clusters which have sent Germany’s R rate soaring to 2.76 in recent days.

Angela Merkel has previously warned that Germany’s hospitals could be overwhelmed if the rate hovers even slightly above 1.

The Robert Koch diseases institute (RKI) which calculates the rate says the rate is prone to jumping around when the overall number of cases is still low.

The high rate ‘is linked to local clusters… with the outbreak in North Rhine-Westphalia playing a particularly large role,’ the RKI says.

Germany’s total number of new cases rose to 3,553 last week compared to 2,290 the week before – ending 10 straight weeks of decline.