Beijing: Global coronavirus cases topped 1 million on Thursday as the pandemic explodes in the United States and the death toll continues to climb in Italy and Spain, according to a tally by Johns Hopkins University. 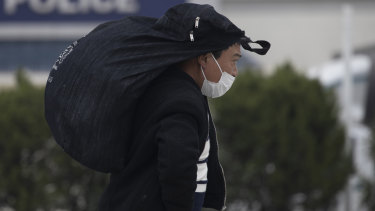 A man walks through a toll booth to enter the city of Wuhan which is still under lockdown due to the coronavirus outbreak but have started allowing some residents to return in central China’s Hubei province.Credit:AP

The virus has killed over 51,000 globally with the largest number of deaths in Italy, followed by Spain and the United States.

Total cases reported by Thursday grew 10 per cent from a day earlier, the first time the rate has hit double digits since the virus took hold outside China.

The global fatality rate is now over 5 per cent of all reported cases, with countries including the United Kingdom, the United States and Spain reporting a spike in fatalities over recent days.

Around 22 per cent of total cases have been reported by the United States, while Italy and Spain have each reported 11 per cent of global cases.

China, where the virus emerged in December, has reported 8 per cent of total cases globally as the epicentre of the pandemic moved to Europe and the United States.