Boston: The coronavirus has hit another sobering milestone: more than 50 million positive cases worldwide since the pandemic began. 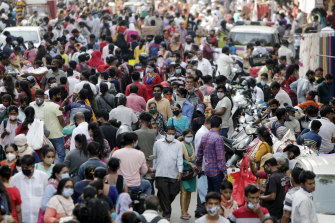 People wearing masks as a precaution against the coronavirus crowd a market place as they shop ahead of Diwali festival in Mumbai, India. India’s tally of coronavirus cases is currently the second largest in the world behind the United States.Credit:AP

There have been more than 1.2 million deaths from the disease worldwide since the pandemic started.

The US, with about 4 per cent of the world’s population, represents almost a fifth of all reported cases.

The country has had more than 9.8 million cases and more than 237,000 deaths from the virus since the pandemic started, according to Johns Hopkins University’s data.

The US reported more than 126,000 positive cases and more than 1000 deaths from COVID-19 on Saturday, according to the most recent data from Johns Hopkins University.

It marked the fourth day in a row that new cases topped more than 100,000 as the country has broken its own record for daily cases with nearly every passing day this week.

The virus death toll is also rising in the country. The seven-day rolling average for daily new deaths rose over the past two weeks from 801 on October 24 to 930 on November 7, the university said.

It is on the brink of being the first country to record 10 million cases, with Johns Hopkins putting its total cases at 9,961,320.

According to a Reuters analysis of global data, October was the worst month for the pandemic so far as a second wave surge also hit Europe.

The acceleration of the spread of the pandemic has meant that while it took 32 days for the number of cases to rise from 30 million to 40 million, it took just 21 days to add another 10 million.

Europe, with about 12 million cases, is the worst-affected region, overtaking Latin America. Europe accounts for 24 per cent of COVID-19 deaths.

India has reported 45,674 new coronavirus infections, with the capital coping with a sharp surge of nearly 7000 cases a day this past week.

India’s tally of confirmed cases — currently the second largest in the world behind the United States — has exceeded 8.5 million. The Health Ministry on Sunday also reported 559 deaths in the past 24 hours, raising total fatalities to 126,121.

India has seen an overall steady dip in new cases after touching nearly 100,000 a day in mid-September.

However, the tally in New Delhi continues to hover at around 7000 a day after dropping to nearly 1000 in September. The capital also reported 79 deaths in the past 24 hours, the most since June.

Delhi state Health Minister Satyendar Jain said that apart from aggressive contact tracing, targeted testing in shopping areas and other busy locations also has started. And authorities are reaching out to people through mobile testing vans.

The government has warned that the situation could worsen due to festival shopping crowds, coupled with the onset of winter and high air pollution levels.

The Italian Alpine province has become that country's latest region to be declared a “red zone”, shutting down most non-essential shops, barring cafes and restaurants from serving meals.

Bolzano Province Governor Arno Kompatscher said he decided to order the crackdown as ICU beds were rapidly filling up with COVID-19 patients.

“We could add 100 ICU beds,” the governor said, but “we can only hold up to a certain point.” He noted that the province needed more doctors and nurses.

Israel has allowed most retail shops to reopen for the first time in nearly two months, in the latest phase of its exit from a second coronavirus lockdown.

Under the new rules, shops can accept up to four customers at a time, and indoor shopping malls remain closed.