NEW ORLEANS — Decades ago, soon after moving to this city from India, Arvinder Vilkhu began telling his wife and children, “If we ever have a restaurant, we must have a curried gumbo.”

Mr. Vilkhu had tasted his first gumbo in 1984 during a job interview at a New Orleans hotel. “I was so much in love,” he said of the rich dish, something between a soup and a stew. He began developing his own distinctive version after immigrating here later that year.

But it wasn’t until 2017, when the family opened their Indian restaurant, Saffron Nola, on a restaurant-dense stretch of this city’s Uptown neighborhood, that he began serving his gumbo, bright with ginger, turmeric and cilantro.

This is an extraordinary time for the city’s signature dish. Gumbo, long a fixture in restaurants here, has disappeared from many menus as new chefs arrive with different cuisines and ideas, catering to a population remade by the transplants who settled in the city after Hurricane Katrina’s devastation in 2005.

But the chefs who have stuck by the dish are using the moment to stretch its boundaries by adding ingredients that defy tradition, bringing it fresh relevance. Many of the innovations reflect global influences on New Orleans cooking, particularly from South and Southeast Asia. This time of year, with the cooler weather and the start of the Mardi Gras season, may be the best time to sample them — and to appreciate gumbo’s long and continuing evolution.

Michael Gulotta, a New Orleans native, has resumed cooking the seasonal seafood gumbo he introduced as a lunch special last year at Maypop, his modern restaurant in the Warehouse district. It’s seasoned with lime leaf, fermented black beans and black cardamom, in homage to the Vietnamese and Chinese restaurants that have long flourished on the city’s outskirts.

“I served that gumbo all last winter,” Mr. Gulotta said. “People went crazy for it.”

Gumbo has existed in various forms across south Louisiana for centuries. It can contain any number of ingredients, depending on the chef and the season. But until recently it was rare to find gumbo that incorporated ingredients beyond a fixed list of proteins (fowl, sausage, local shellfish), aromatics (onion, bell pepper, celery — known locally as the holy trinity) and spices (cayenne, thyme, white pepper). 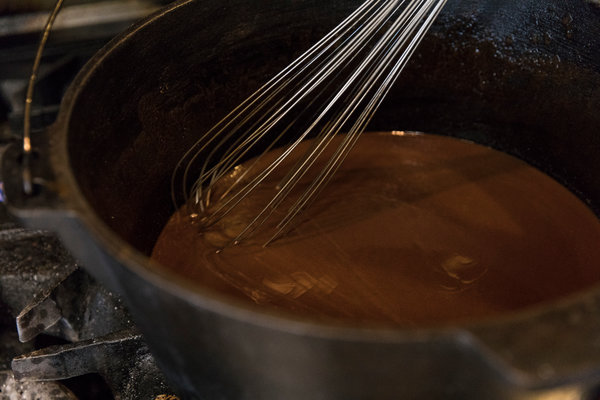 Gumbo’s flavor is further influenced by roux, the blend of fat and flour used to thicken the broth. It’s a French technique adopted by Louisianians, who often cook the roux so long that it darkens and takes on bitter notes reminiscent of Mexican mole. Sliced okra and the sassafras powder known as filé, a Native American contribution to Louisiana cooking, are also used as gumbo thickeners, either in combination or in place of roux.

All of which is to say that New Orleans gumbo welcomed considerable variation and interpretation even before chefs and home cooks started to add collard greens and Vietnamese fish sauce to their pots.

The pale-roux gumbo with shrimp, crab and oysters that Billy Thurman, a commercial fisherman, cooks at home in Meraux, a 25-minute drive down the Mississippi River from the French Quarter, has little in common with the inky brown duck-andouille gumbo served at Upperline, a traditional restaurant in Uptown.

“Everybody likes it different,” Mr. Thurman said as he stirred his roux with a rubber spatula.

That a single dish can encompass such a broad spectrum of flavor is a big part of gumbo’s enduring local appeal. “Of all the many dishes in Louisiana cooking, gumbo is the one that most singularly defines us,” said Frank Brigtsen, the chef and an owner of Brigtsen’s Restaurant, where rabbit filé gumbo has been a signature offering for 25 years.

Mr. Brigtsen echoes the sentiments of local chefs who came of age, as he did, in the 1980s and ’90s. In those years, the city’s economy realigned around tourism and the rising national fame of its restaurants and chefs. It would have been unthinkable for a restaurant serving New Orleans food to leave gumbo off its menu.

Emeril Lagasse, arguably the most famous chef to come out of New Orleans, has served gumbo at all of the 18 restaurants he has opened since he started his empire in 1990.

But in recent years, gumbo has become less omnipresent in New Orleans restaurants, as a new generation of chefs has come to prominence, many of them unfettered by entrenched customs.

In the last half-decade, the chefs Sue Zemanick, Alon Shaya, Justin Devillier and Nina Compton have all been named Best Chef in the South by the James Beard Foundation. None operated a restaurant at the time that prominently featured gumbo.

“People here take gumbo very personally and seriously, and I’m not from here,” Ms. Compton said. The chef, whose cooking bears the accents of her native St. Lucia, in the eastern Caribbean, was explaining why she doesn’t serve gumbo at either of her New Orleans restaurants, Compère Lapin and Bywater American Bistro. “It’s not worth upsetting people.”

Yet gumbo’s roots run back through the West Indies. While Europeans have long taken credit for inventing the dish, its origins are largely African and Caribbean; the Africans who passed through the city’s slave markets did much of the cooking in a French colony that, unlike its Anglo-American neighbors, reveled in good food.

“At its core, gumbo is West African,” said Howard Conyers, a New Orleans pitmaster, scholar and rocket scientist, as well as the host of the PBS web series “Nourish.” Dr. Conyers points out that gumbo’s name derives from the word for okra in many Bantu languages spoken throughout Africa — and that the slave trade brought the okra plant to North America.

Leah Chase, the 96-year-old chef and co-owner of the Creole restaurant Dooky Chase’s, said it took time for gumbo to migrate from home cooks’ stoves to New Orleans restaurant menus.

“When I started working in a restaurant in 1940-41, I don’t remember seeing gumbo served all over like it is now,” Ms. Chase recalled. Dooky Chase’s light-brown gumbo, packed with shrimp, crabs, ham, veal stew meat, chicken and two kinds of sausage, is based on Ms. Chase’s grandmother’s recipe. “I serve what Creoles of color generally made for gumbo,” Ms. Chase said, using a term that refers to mixed-race descendants of West African, French and Spanish citizens of New Orleans.

By contrast, Jordan Ruiz’s crab-and-redfish gumbo at the Munch Factory, his restaurant in the Lower Garden District, is much darker and comparatively austere. “That’s the way my mom and her mom made it for decades,” said Mr. Ruiz, who is also Creole.

The dark-roux gumbos that the chef Donald Link serves at his five New Orleans restaurants, including Herbsaint and Cochon, are reminiscent of what he grew up eating in Cajun country, west of New Orleans.

It’s the style Mr. Link prefers, though his conception of what gumbo is has expanded as he has researched the dish’s roots during numerous trips to the Caribbean. He is still experimenting: At his Uptown home on a recent afternoon, he cooked a roux-less seafood gumbo for just the second time in his life.

“Cajun country and New Orleans have almost, like, a gumbo rivalry, as if one gumbo is better than the other,” Mr. Link said as he prepared crab shells for seafood stock.

His popular black-eyed pea and pork gumbo with braised collard greens is often praised by younger chefs who say it has provided them cover to test new gumbo ingredients.

“I first made that back when we were making a ‘gumbo of the day’ at Herbsaint” in the early 2000s, Mr. Link said. “People didn’t seem to mind.”

An attempt around the same time to serve gumbo with potato salad instead of rice — a Cajun custom — didn’t go as well. “People found it so bizarre I stopped doing it,” Mr. Link said. The substitution has more recently been embraced in New Orleans.

While change is built into a dish that has been repeatedly altered over generations, some chefs’ experiments are raising questions about what qualifies as gumbo and what does not.

Levi Raines, the chef de cuisine at Bywater American Bistro, which opened last spring, developed an oyster gravy that is essentially gumbo by another name: a creamy purée of poached oysters and grated mirliton squash served over jasmine rice with fried jerk-spiced oysters. It is as close as Ms. Compton, an owner, has come to associating herself with gumbo.

“It has the core elements of gumbo,” Ms. Compton said of the oyster gravy, “but it’s presented in a way that people don’t normally see.”

At Turkey and the Wolf, a popular sandwich shop in the Irish Channel neighborhood, Mason Hereford cooks a gumbo that is notable for containing ingredients that purists consider heretical, including tamarind paste, potato chips, Worcestershire sauce and, occasionally, leeks.

“I don’t recall anyone eating it and saying it’s gross,” Mr. Hereford said. “But I have had people eat it and say, ‘This is not gumbo.’”

As similar innovations mature into standard operating procedures, fewer diners may question gumbos like Mr. Hereford’s. Another rising young chef, Marcus Jacobs of Marjie’s Grill, considers the smoked chicken and Thai curry gumbo he serves as a holiday special to be one of the more conventional items on a menu largely inspired by trips to Southeast Asia.

At Saffron Nola, Ashwin Vilkhu said that restaurant has struck a similar chord. “The most beautiful thing about this whole thing is, we’re changing people’s perceptions,” he said.

Informed that curried gumbo was catching fire in New Orleans, Ms. Chase was at first aghast. “I would never dream of putting curry in my gumbo,” she said.

But after giving it a second thought, the woman often described as the queen of Creole cuisine changed her tone. “That’s their version of gumbo,” she said. “That’s good.” 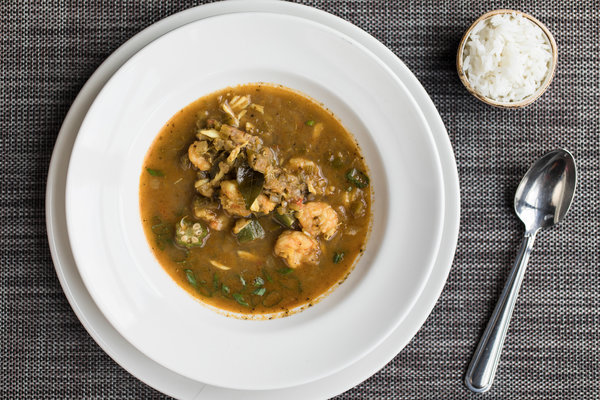 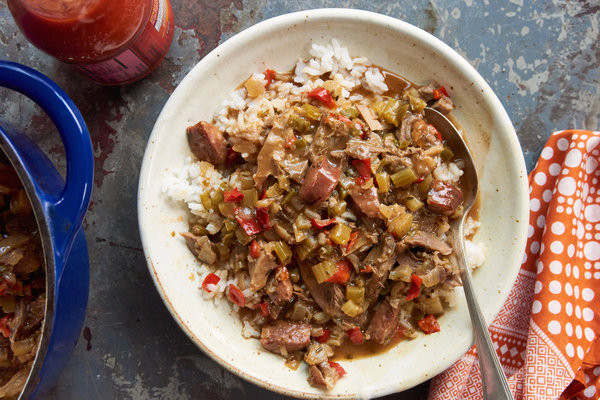 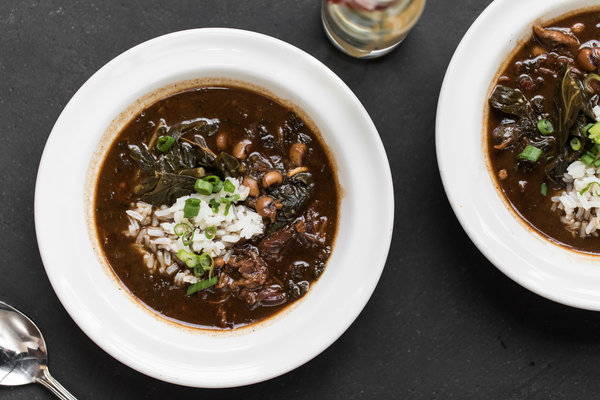 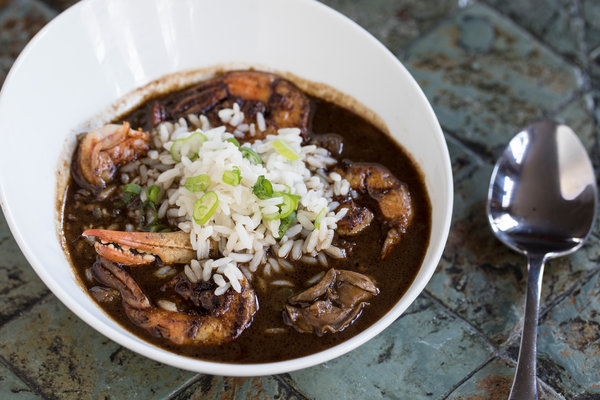