Robbie Coltrane has spoken out in defence of JK Rowling after she was accused of being transphobic.

The Harry Potter author has continuously come under fire for her controversial views on gender identity, but vehemently denies that she is transphobic.

The row was rekindled this week when it was revealed that her new book, Troubled Blood, features a ‘transvestite serial killer’.

She has been criticised by Harry Potter stars including Daniel Radcliffe, Emma Watson and Rupert Grint. 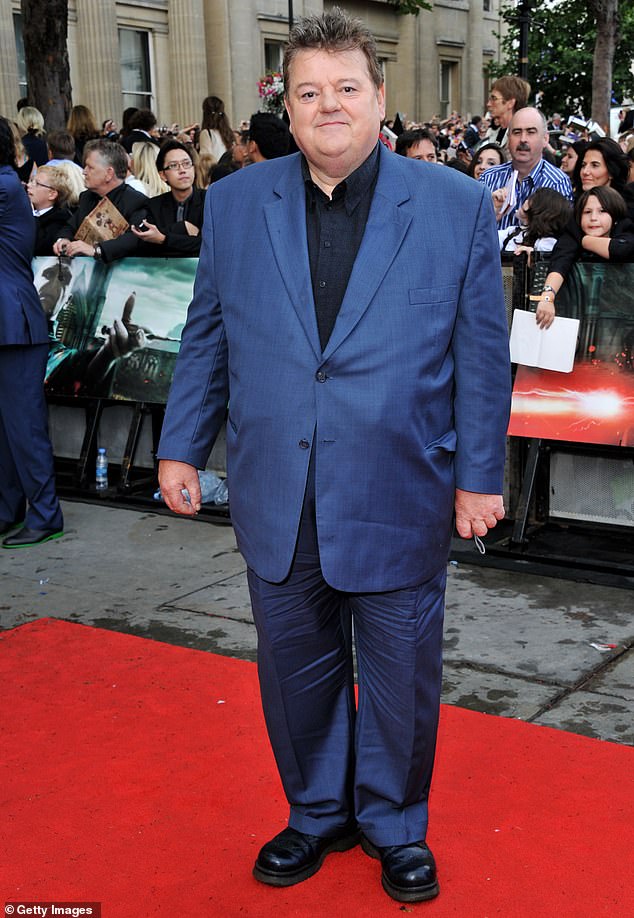 However, Mr Coltrane, 70, who played gamekeeper Hagrid in the Harry Potter films, has suggested people are too easily offended and said he does not find her views offensive.

The Harry Potter author has continuously come under fire for her controversial views on gender identity, but vehemently denies that she is transphobic

He told the Radio Times: ‘I don’t think what she said was offensive really. I don’t know why but there’s a whole Twitter generation of people who hang around waiting to be offended.

‘They wouldn’t have won the war, would they? That’s me talking like a grumpy old man, but you just think, ”Oh, get over yourself. Wise up, stand up straight and carry on”.’

Cracker star Coltrane, said he did not want to go further because, ‘I don’t want to get involved in all of that because of all the hate mail and all that s***, which I don’t need at my time of life’.

Ms Rowling was initially accused of being transphobic after responding to an article headlined ‘Creating a more equal post-Covid-19 world for people who menstruate’.

She tweeted: ‘People who menstruate.’ I’m sure there used to be a word for those people. Someone help me out. Wumben? Wimpund? Woomud?’

‘I know and love trans people, but erasing the concept of sex removes the ability of many to meaningfully discuss their lives. It isn’t hate to speak the truth.’

Jedward also waded into the JK Rowling transphobia row, suggesting their fans use her new book as firewood. 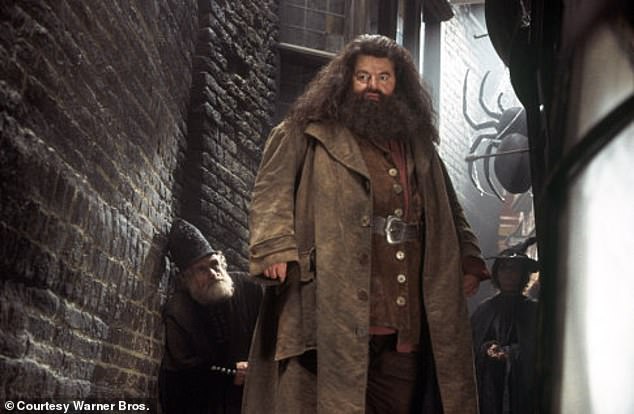 However, Mr Coltrane, 70, who played gamekeeper Hagrid in the Harry Potter films, has suggested people are too easily offended and said he does not find her views offensive

The former X Factor stars, real names John and Edward Grimes, have become the latest high profile figures to criticise Rowling for the comments, writing on Twitter: ‘#TransRightsAreHumanRights Understanding is the first step to acceptance @jk-rowling and only with acceptance can there be recovery.

‘It matters not what someone is born, but what they grow to be!

‘Every human life is worth the same, and worth saving! 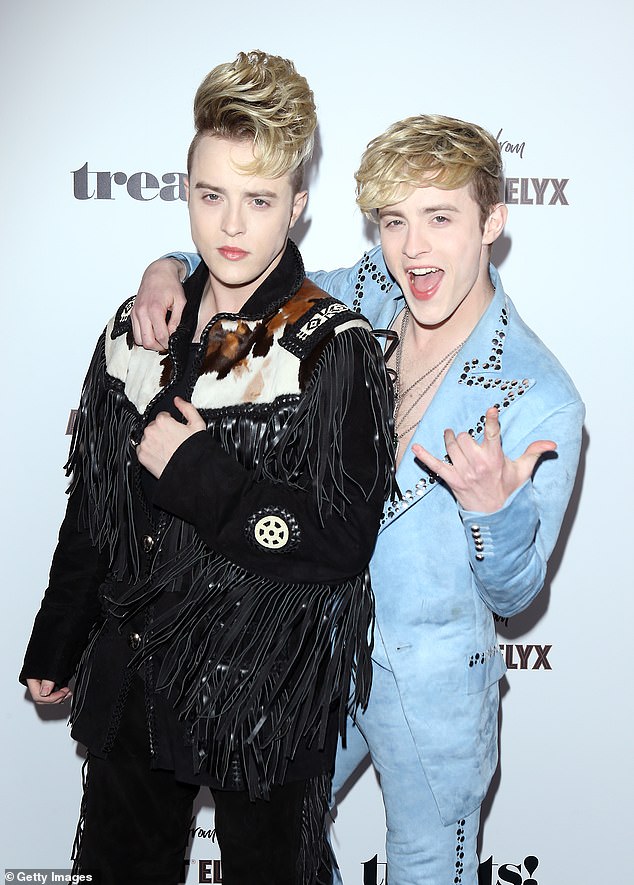 Jedward also waded into the JK Rowling transphobia row, suggesting their fans use her new book as firewood

‘We couldn’t be more proud of our fans! Over the years seeing the growth and development finding who they are and becoming their true authentic selves!

They added: ‘Does anyone need firewood this winter! JK’s new book is perfect to burn next to a Romantic fire. Aww get all cozy and comfy can’t wait.’

She has also been criticised by Harry Potter stars including Daniel Radcliffe, Emma Watson and Rupert Grint.

Speaking to The Times, Rupert said: ‘I firmly stand with the trans community and echo the sentiments expressed by many of my peers. Trans women are women. Trans men are men.

‘We should all be entitled to live with love and without judgement.’ 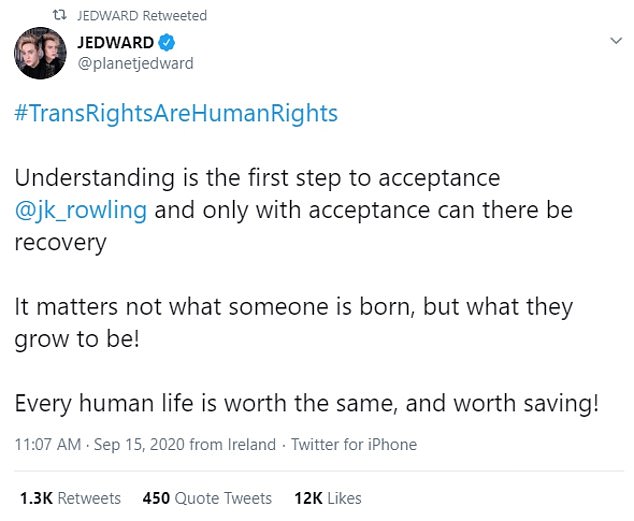 ‘I want my trans followers to know that I and so many other people around the world see you, respect you and love you for who you are.’

She went on to say that she was proud to donate to charities such as Mermaids and Mama Cash before encouraging her fans to do the same.

Daniel Radcliffe, 30, wrote a heartfelt blog post for The Trevor Project, a non-profit devoted to suicide prevention among LGBTQ+ youth.

He said: ‘Transgender women are women. Any statement to the contrary erases the identity and dignity of transgender people and goes against all advice given by professional health care associations who have far more expertise on this subject matter than either Jo or I.’

Since the backlash, Mermaids – a charity that supports transgender children – urged Rowling to meet some of the young people it works with in a lengthy statement challenging her views.

But she has since answered her critics with a 3,663 word essay posted on her website on Wednesday under the headline: ‘J.K. Rowling Writes about Her Reasons for Speaking out on Sex and Gender Issues.’

She included her personal experiences with domestic abuse at the hands of her ex-husband of 18 months, Jorges Arantes.

She appeared mindful that her words might not be suitable for her younger fans by adding the sub-heading: ‘Warning: This piece contains inappropriate language for children.’ 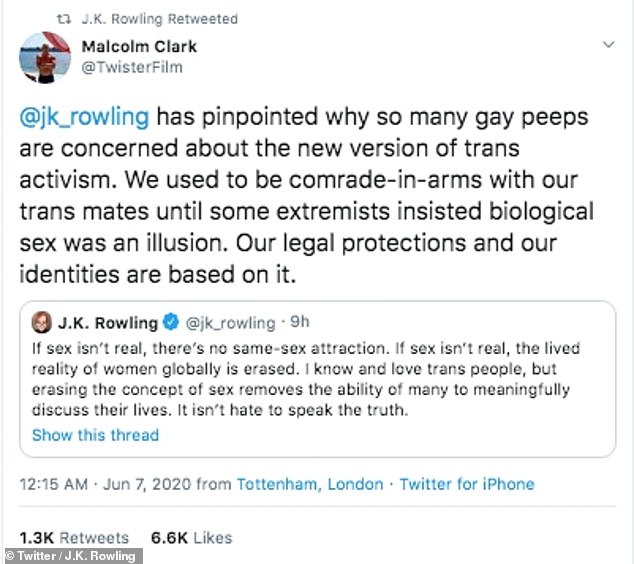 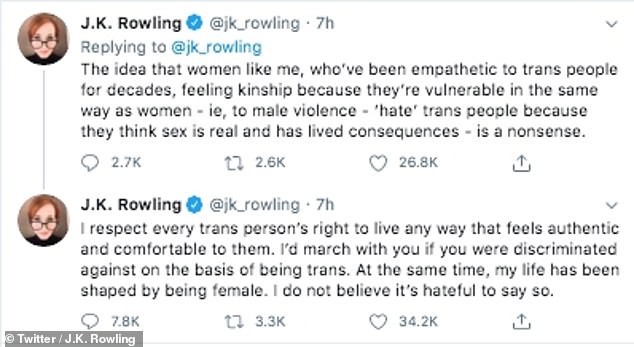 Defence: The wordsmith seemingly denied claims of transphobia, before retweeting a fan’s comment which slammed ‘extremists’ for ‘insisting biological sex is an illusion’

In it, the author revealed she was sexually assaulted in her 20s and told of her scars of domestic violence from her first marriage.

‘I couldn’t shut out those memories and I was finding it hard to contain my anger and disappointment about the way I believe my government is playing fast and loose with womens and girls’ safety.’

Ms Rowling also went on to describe her experience of domestic and sexual abuse.

‘I’ve been in the public eye now for over twenty years and have never talked publicly about being a domestic abuse and sexual assault survivor,’ she wrote.

‘This isn’t because I’m ashamed those things happened to me, but because they’re traumatic to revisit and remember. I also feel protective of my daughter from my first marriage.’

The author had one child, daughter Jessica Isabel Rowling Arantes, 26, with her Portuguese ex-husband. They were married for just 13 months.

Former drug addict Arantes admitted in 2000 that he had once slapped her ‘very hard’ early in the morning of November 17, 1993 and thrown her out of the house in Porto, Portugal.

He said: ‘She refused to go without Jessica… there was a violent struggle. I had to drag her out of the house at five in the morning, and I admit I slapped her very hard in the street.’ 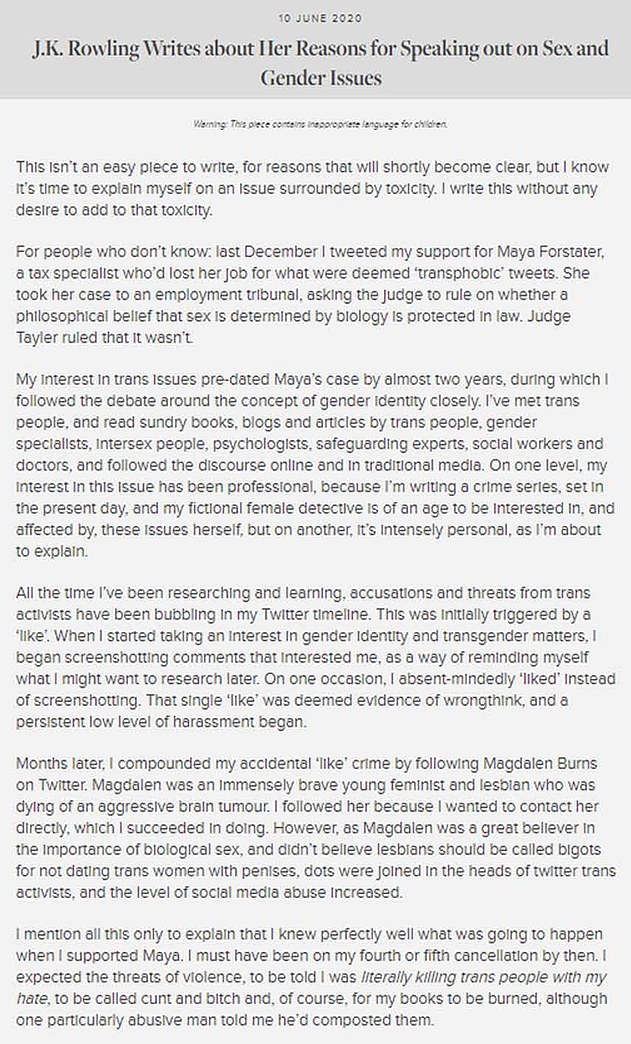 Ms Rowling returned the following day with a policeman to retrieve their four-month-old daughter Jessica and stayed in hiding with friends for two weeks before returning to the UK.

In her post, Ms Rowling said she did not want to ‘claim ownership’ of a story which also belongs to her daughter.

‘I didn’t want to claim sole ownership of a story that belongs to her, too. However, a short while ago, I asked her how she’d feel if I were publicly honest about that part of my life, and she encouraged me to go ahead,’ she added.

‘I’m mentioning these things now not in an attempt to garner sympathy, but out of solidarity with the huge numbers of women who have histories like mine, who’ve been slurred as bigots for having concerns around single-sex spaces.

‘I managed to escape my first violent marriage with some difficulty, but I’m now married to a truly good and principled man, safe and secure in ways I never in a million years expected to be.

‘However, the scars left by violence and sexual assault don’t disappear, no matter how loved you are, and no matter how much money you’ve made.

‘My perennial jumpiness is a family joke – and even I know it’s funny – but I pray my daughters never have the same reasons I do for hating sudden loud noises, or finding people behind me when I haven’t heard them approaching.’

Ms Rowling also declared she had ‘deep concerns’ about the pressures young people face to transition to another gender.

She even suggested she might have become a man herself – ‘to turn myself into the son my father had openly said he’d have preferred’ – if she had been subjected to similar pressures.