Has North Korea finally admitted it has got a Covid outbreak? Kim Jong un blasts senior officials at emergency Politburo meeting over ‘crucial’ lapse that has caused a ‘GREAT CRISIS with grave consequences’

Kim Jong un has blasted senior officials at an emergency Politburo meeting over what he called a ‘crucial’ lapse that had caused a ‘great crisis with grave consequences,’ in an apparent reference to a Covid-19 outbreak.

North Korea has so far claimed to have had no coronavirus infections, despite testing thousands of people and sharing a porous border with China – the source of the disease.

Experts say the claim is highly dubious and have warned that any outbreak could easily overwhelm the isolated country’s poor health infrastructure.

Kim berated high-ranking Communist officials at party headquarters on Tuesday, signalling that the country’s Covid defences had been breached as he lashed them for neglecting their duties and ‘creating a great crisis in ensuring the security of the state and safety of the people and entailed grave consequences.’

The official Korean Central News Agency did not elaborate on what the dictator was referring to.

But Kim added that cadres’ ‘lack of ability and irresponsibility’ had hindered important work, accusing them of ‘self-protectionism and passiveness’. 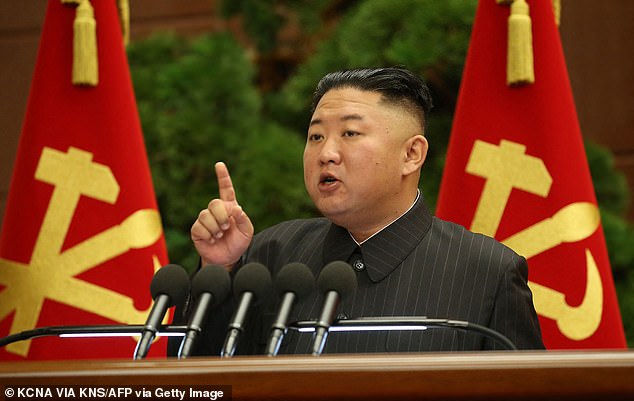 Kim Jong blasted senior officials at a Politburo crisis meeting over what he called a ‘crucial’ lapse that had caused a ‘great crisis with grave consequences,’ in an apparent reference to a Covid-19 outbreak 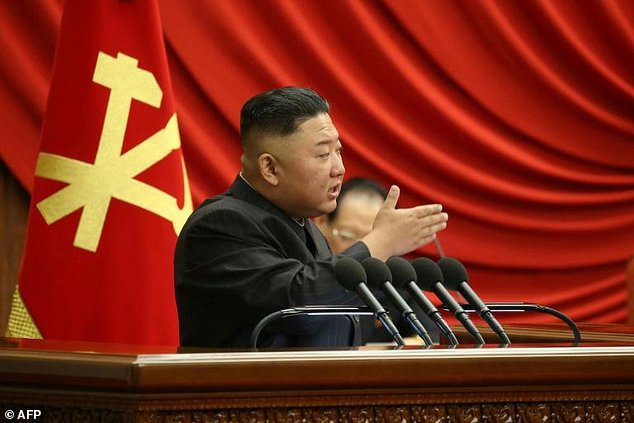 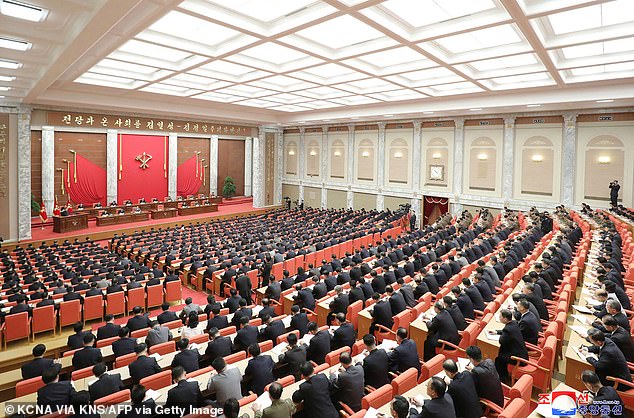 The impoverished country’s ramshackle health system and lack of medical supplies would leave it struggling to cope with a major Covid-19 outbreak.

Members of the presidium of the politburo – the highest decision-making body of the ruling Workers’ Party – and the politburo were recalled and new ones named at the meeting on Tuesday, KCNA reported, adding that government officials were ‘transferred and appointed’.

‘The fact that the politburo discussed this, and that the KCNA reported about it, signals Pyongyang is probably in need of international aid,’ he said.

‘Otherwise they would not have done this as it inevitably involves acknowledging the regime’s own failure in its anti-epidemic efforts.’

Park Won-gon of Ewha Womans University in Seoul pointed out that the meeting’s attendance was unusually large and said the reference to ‘grave consequences’ meant it was ‘possible’ that the North had confirmed cases.

‘It does look like Pyongyang is going through something serious that’s related to Covid-19,’ he added.

Ever since the pandemic began, North Korean state media have highlighted anti-coronavirus measures and officials have exhorted citizens to remain vigilant.

At a military parade in October, Kim himself tearfully thanked his people for their efforts and said the North had not seen a single case of the ‘evil virus’, although analysts have long doubted the assertion.

And Pyongyang’s coronavirus defence has come at a high price. 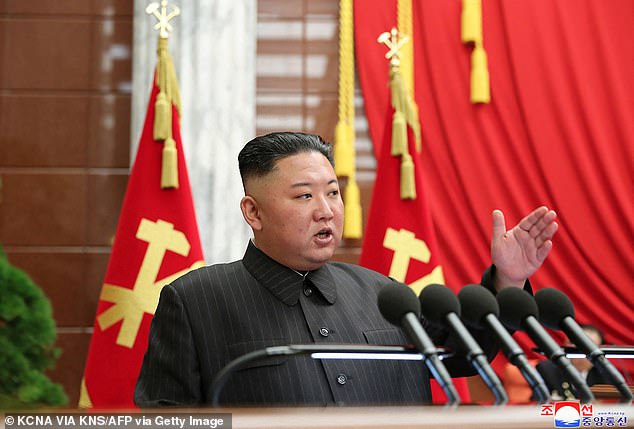 Kim addresses party officials at their Pyongyang HQ on Tuesday 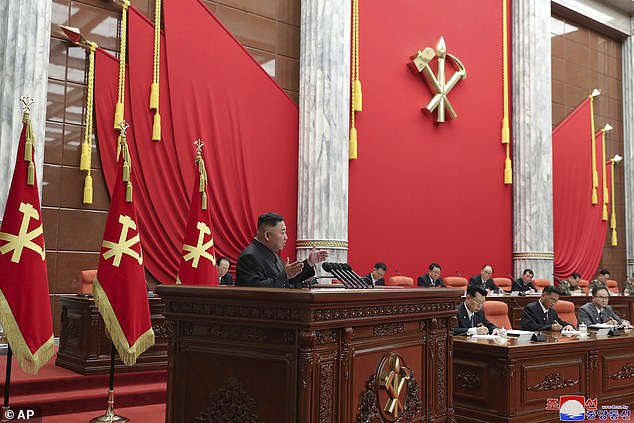 Kim told them that they ‘lack of ability and irresponsibility’ had hindered important work, accusing them of ‘self-protectionism and passiveness’ 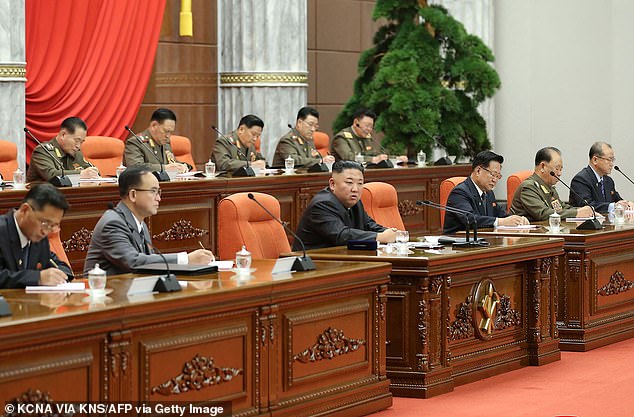 Its self-imposed and strictly enforced blockade has left it more isolated than ever: trade with Beijing – its economic lifeline – slowed to a trickle while all international aid workers have left.

Several UN relief groups confirmed to AFP that the Needs and Priorities document – a key report that summarises the humanitarian situation in the country and forms the basis of UN appeals – will not be published this year.

And this month, Pyongyang admitted it was tackling a food crisis, sounding the alarm in a nation with a moribund agricultural sector that has long struggled to feed itself.

Earlier, Kim warned his people to prepare for the ‘worst-ever situation’.

Pyongyang has been looking to shore up loyalty to the authorities, with state television last week showing a resident of the capital expressing concern and saying everyone was ‘heartbroken’ over the ’emaciated’ condition of Kim, who has lost significant weight recently. 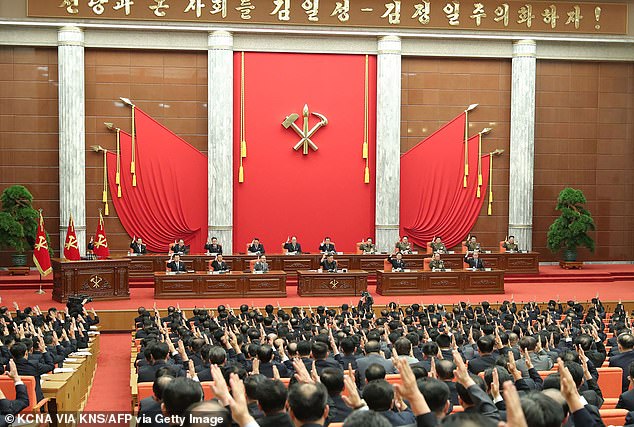 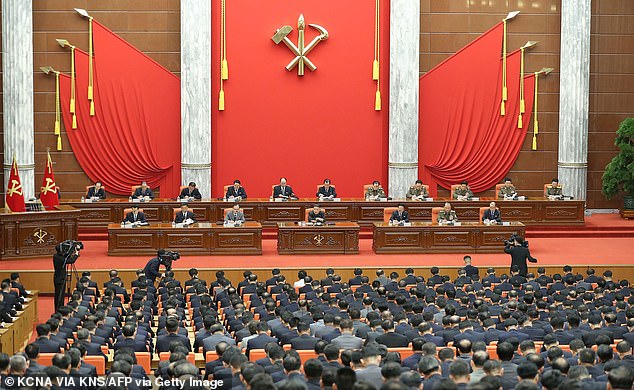 Film crews are seen at the front of the meeting hall, as Kim made the rare decision to go public with the crisis talks

Analysts say Pyongyang is using Kim’s appearance as a way to glorify him by portraying him as a ‘devoted, hardworking’ leader as the country struggles to tackle its food crisis and other challenges.

In recent months, Kim has issued a series of lengthy letters to regime organisations such as the Youth League and the trade union federation exhorting them to pursue ‘loyalty and patriotism’.

At the same time, authorities have mounted a campaign against ‘criminal’ youths tarnished by foreign influences that are ‘dangerous poisons’ to state ideology, according to KCNA.