HERO cops have been hailed for their bravery in taking down a knifeman who attacked five shoppers during a rampage in Manchester.

Courageous unarmed police put themselves on the line to disarm the suspect – tooled up with a 12 inch blade – who left three victims needing hospital treatment with two others avoiding serious injury. 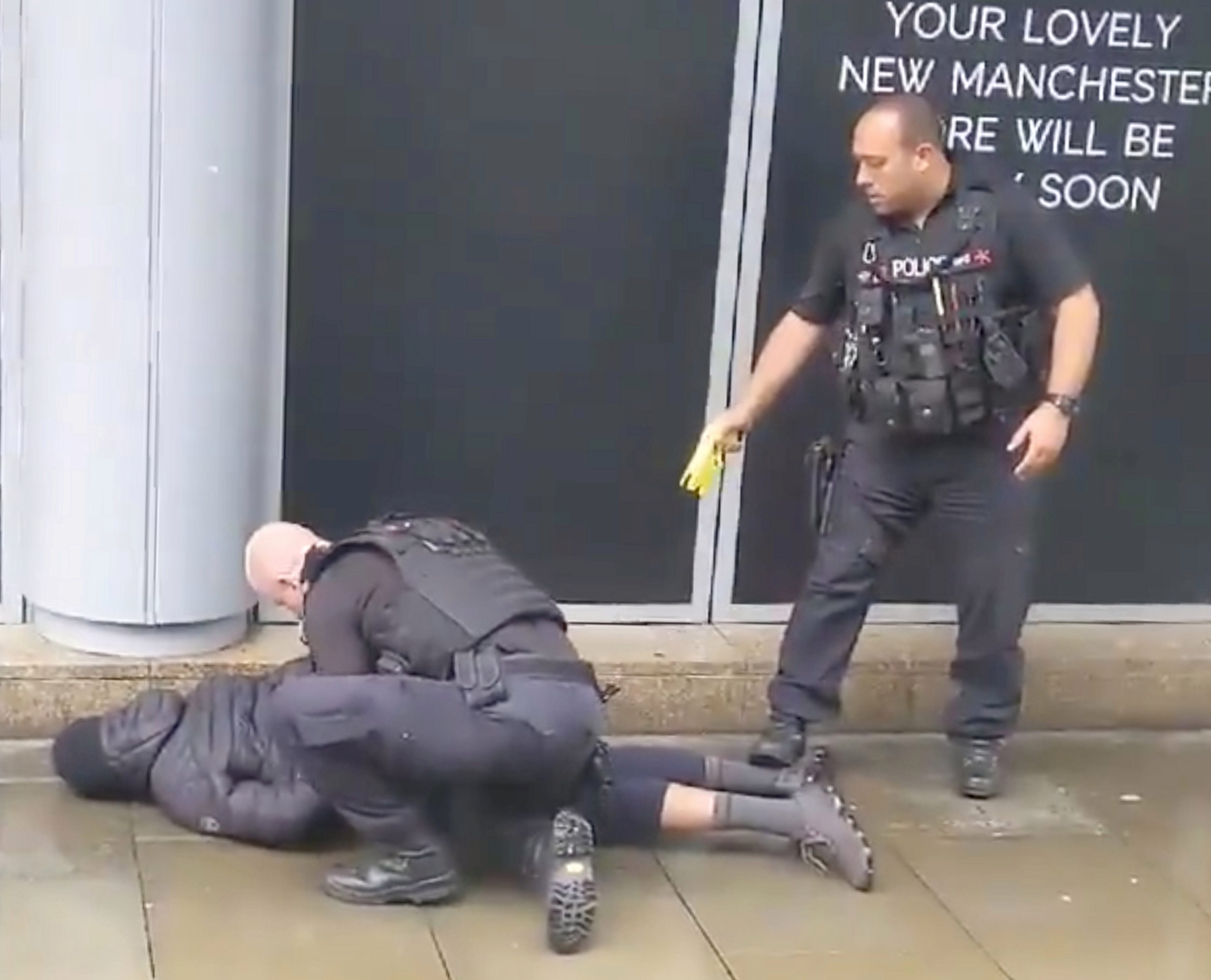 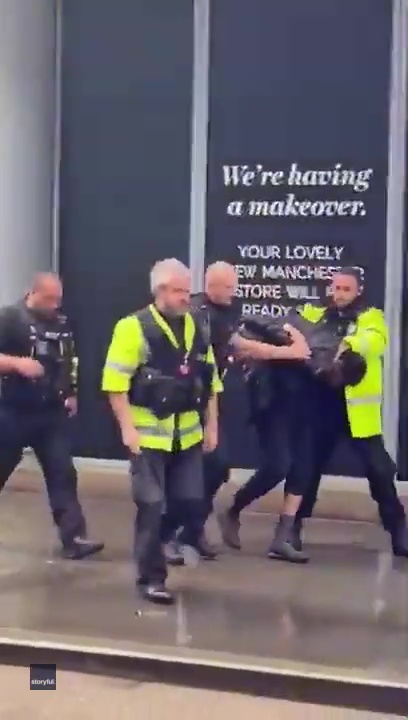 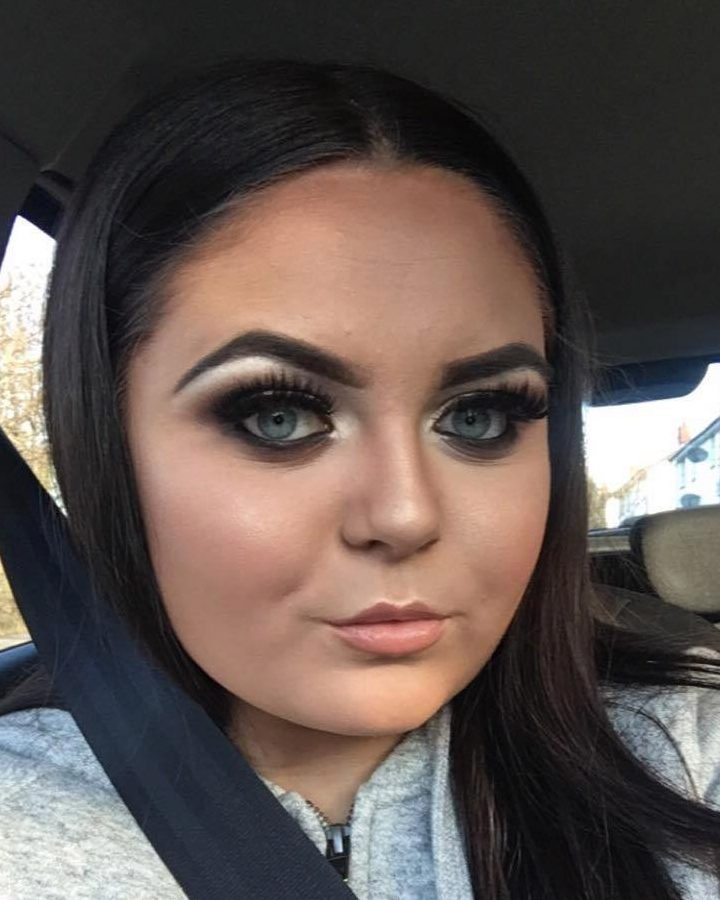 Members of the public fled in terror as chaos erupted at Manchester's Arndale Centre yesterday as the 41-year-old man pounced on passers-by.

The man – who was held on terror offences before being detained under the Mental Health Act – yelled: “I’m going to f*** you up” during the ordeal.

Manchester mayor Andy Burnham praised the "bravery and professionalism" of the police and emergency services who attended the incident.

He added: "It is important not to jump to conclusions but what I can say is that at this stage, it would appear to be more mental health-related than political or religious motivated.

"But of course we need to allow the police to conduct their full inquiries and we keep an open mind on that until that work is complete."

It is important not to jump to conclusions but what I can say is that at this stage, it would appear to be more mental health-related than political or religious motivated.

"It doesn't have to prove that it won't allow things like that to stop people going around, living a good life.

"It's a shopping centre – yesterday it was closed, today it's open and it's full of shoppers. That's the way Manchester will continue to respond if we do have a similar incident of this sort."

Shocked witnesses told how his rampage started in a Starbucks on the ground floor of the centre at 11am.

The attacker lunged randomly as shoppers fled towards the centre’s Exchange Court. Two community support officers who tried to confront him were chased away.

Within five minutes armed cops detained him in Market Street outside the centre.

Footage showed a cop pinning down a man as another held a Taser, though it is not thought to have been fired.

The 41-year-old man was held on suspicion of terror offences and assessed by specialist doctors.

He was later detained under the Mental Health Act with terror cops still in charge of the investigation keeping an "open mind".

Police said none of the injuries were life-threatening. The centre was evacuated but reopened later.

One victim was Chloe McGurk, 19, of Glengormley, Northern Ireland.

Ellen Da Conceicao said their Arndale visit had been the first stop on a “girly weekend”, but added that her pal was “on the mend”.

A Ghanaian Marks & Spencer worker, 49, visiting the Starbucks with her friends is said to have been slashed several times.

One victim was knifed in the back and stomach, two had hand injuries and one was stabbed in the leg.

Police said a fifth person did not need hospital treatment.

Shazia Asif, 40, a carer from Oldham, said: “I was upstairs in Next, I looked down to Starbucks and saw a woman had been stabbed.

“There was a lot of blood, somebody had a scarf around her arm.”

Witness Freddie Houlder, 22, said: “I was in the Office store when a woman rushed in. She had been grazed by a knife outside a shop.

“She burst into tears. She was so lucky she was wearing a thick jacket. The guy was running after as many people as possible.”

A store manager said he sheltered ten people including a woman who had been “lunged at”.

Others said the suspect was hostile to centre staff before the rampage.

Janet Loudon, 21, said: “I came out of work at 10.30am and saw a man shouting racial slurs towards an Arndale worker who was also black.

“He was telling the public, ‘I’m going to f*** you up’ repeatedly. He got more and more agitated. He was pointing at the police and staff saying things like ‘Just because I’m a n*****.”

“I walked on but saw police run inside the Arndale and heard someone shout ‘knife’ and another shout ‘bomb’. Everyone was panicking."

Assistant Chief Constable Russ Jackson said: “We do not know the motivation for this terrible attack.

“It appears random, is certainly brutal and of course extremely frightening for anyone who saw it.”

He added: “Although the injuries are nasty, thankfully none are life-threatening.”

PM Boris Johnson tweeted: “Shocked by the Manchester incident and my thoughts are with the injured and all those affected.” 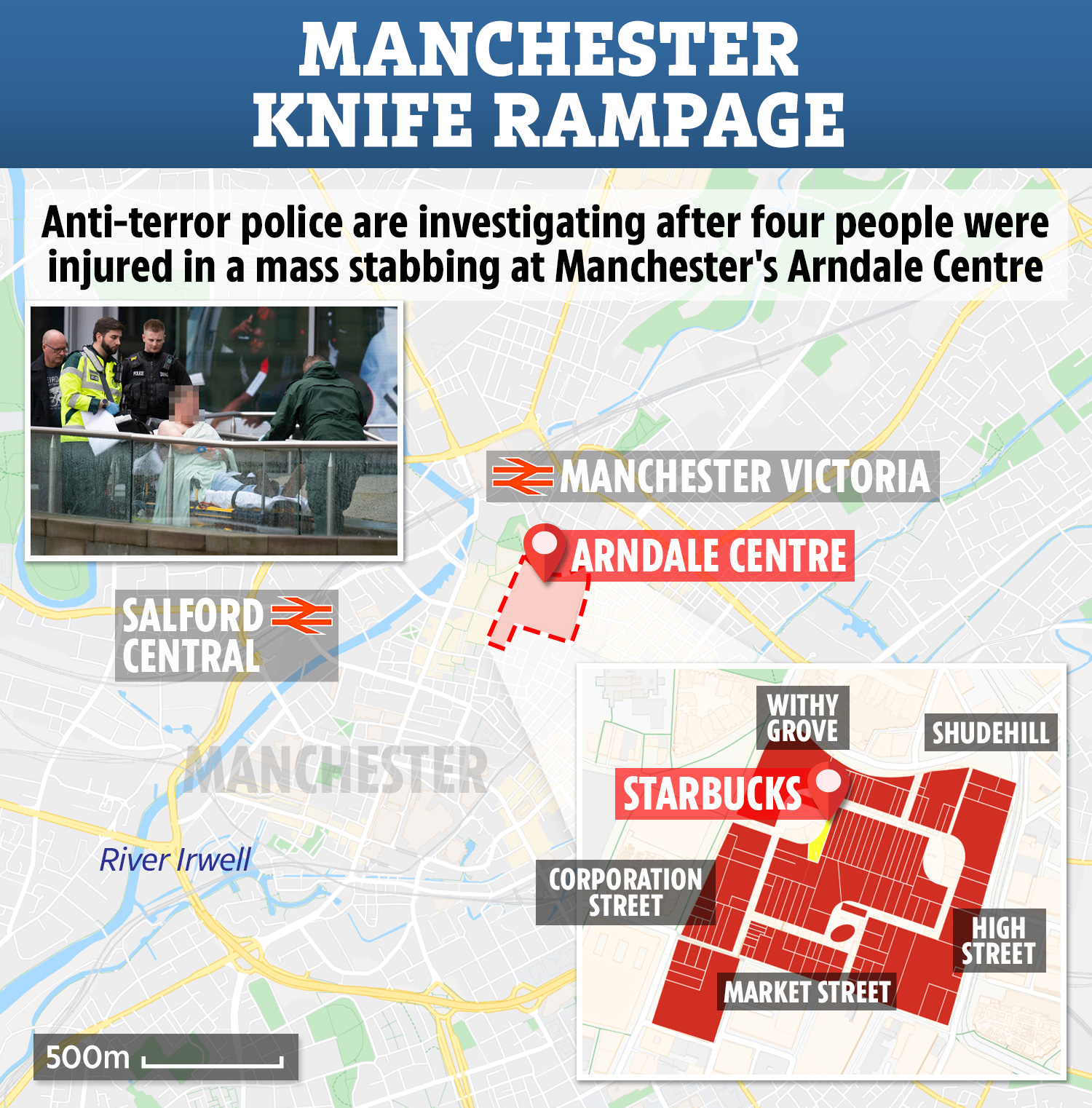 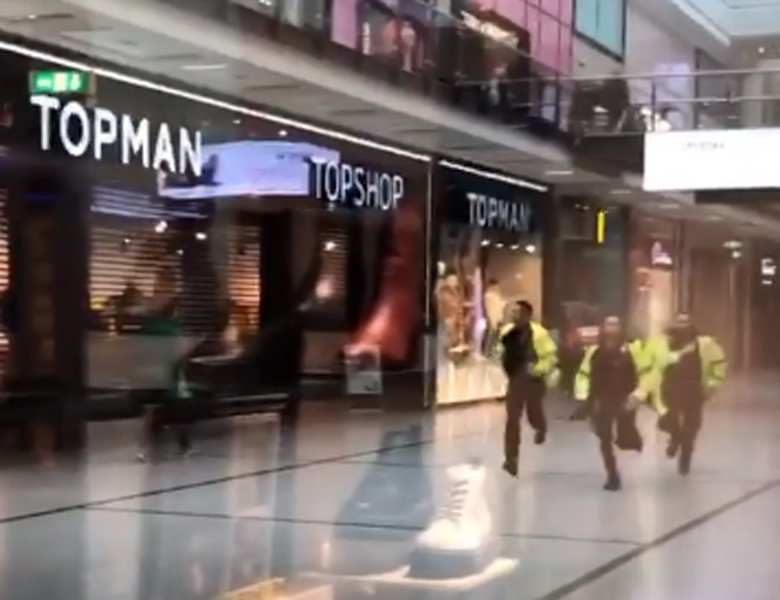 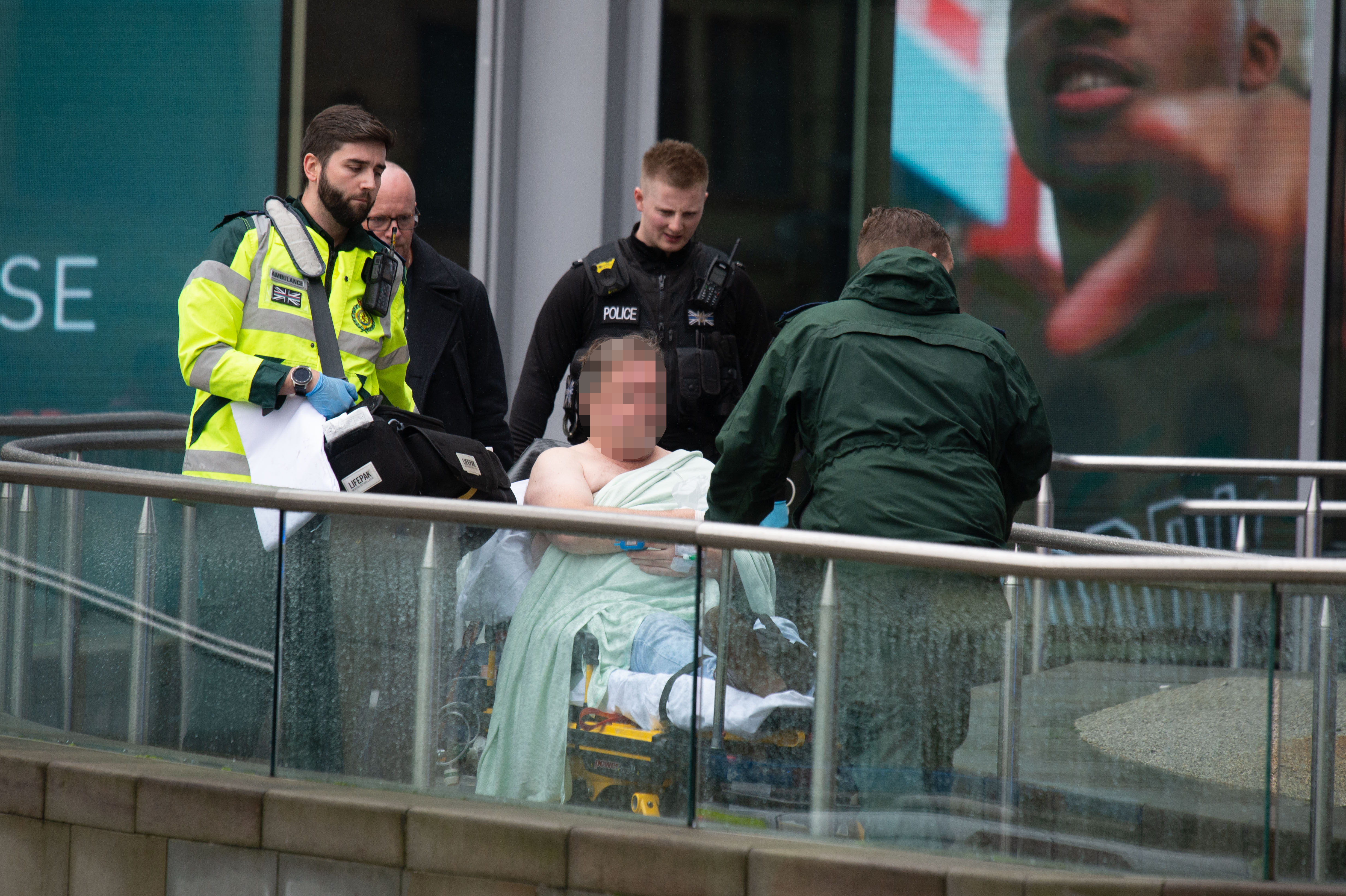 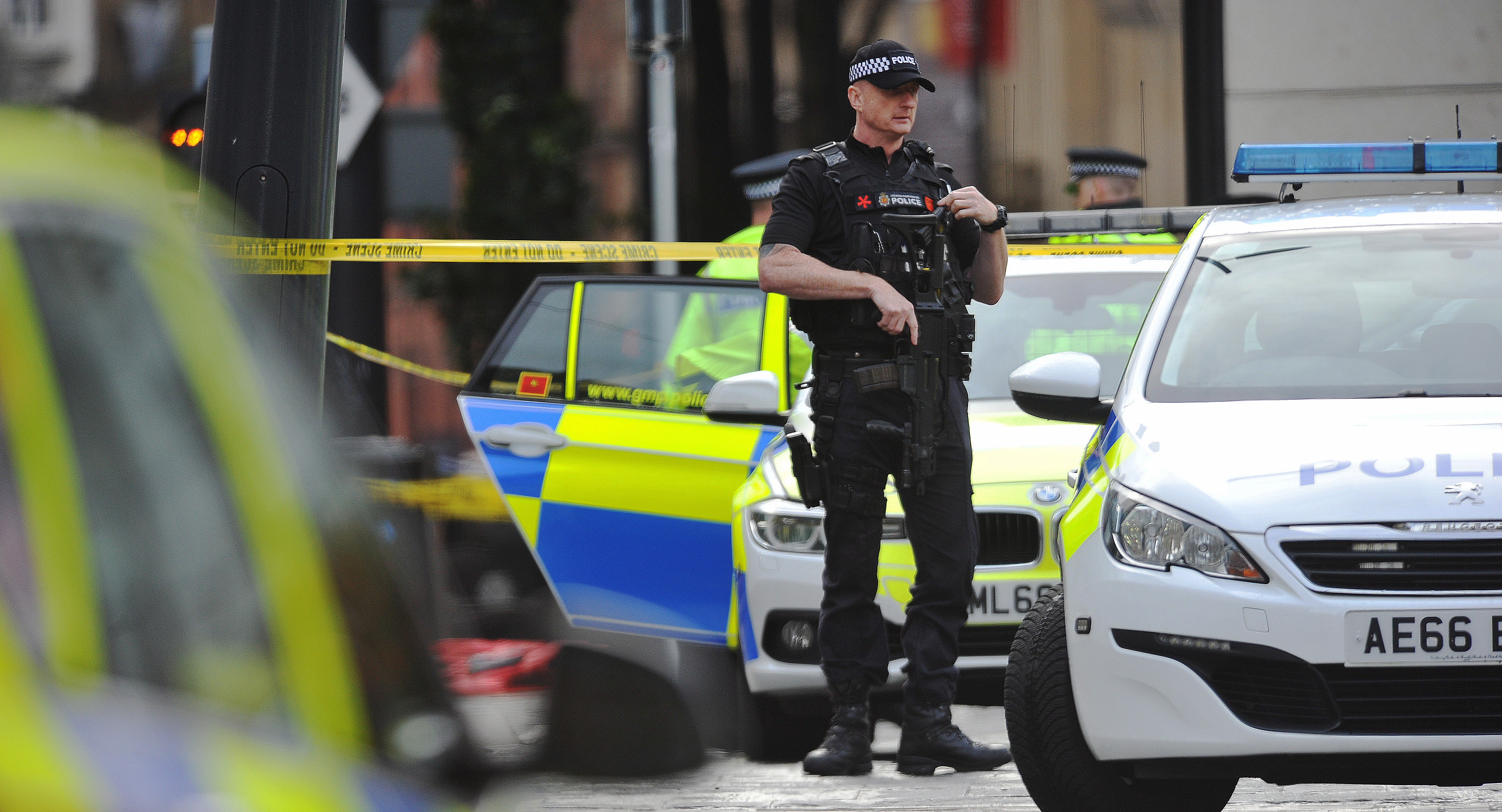 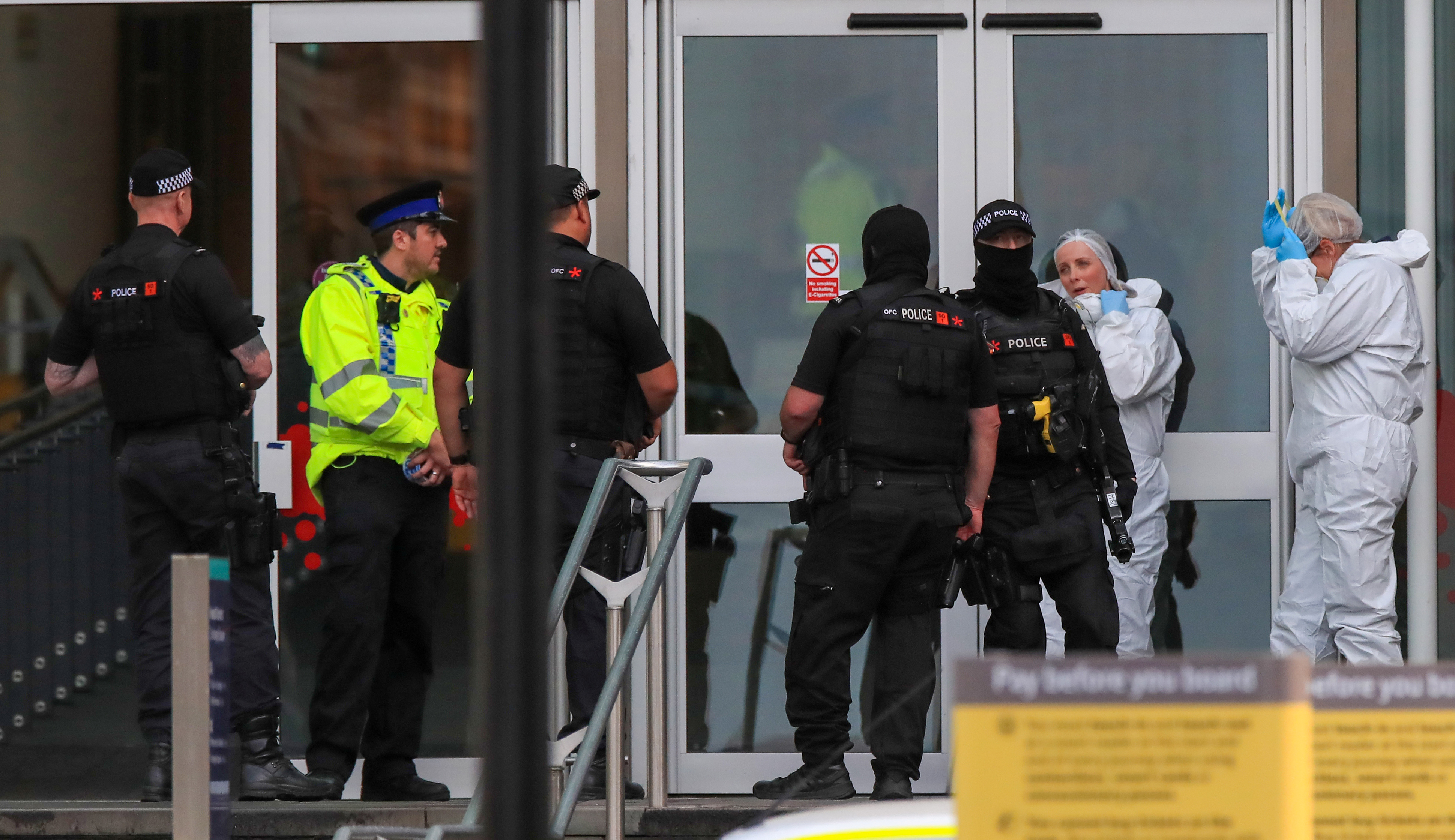