Furious passengers who had holiday plans ruined by the chaos at Gatwick Airport will face further frustration as there is little chance they will get compensation.

Aviation chiefs have declared the drone drama at the West Sussex airport to be an ‘extraordinary circumstance’ which airlines could not reasonably have prevented.

EU law – which still applies to the UK – says carriers are not obliged to pay compensation for cancelled flights in such situations.

The ruling will bring further misery for the 110,000 travellers who have had their Christmas plans thrown into turmoil by today’s events. 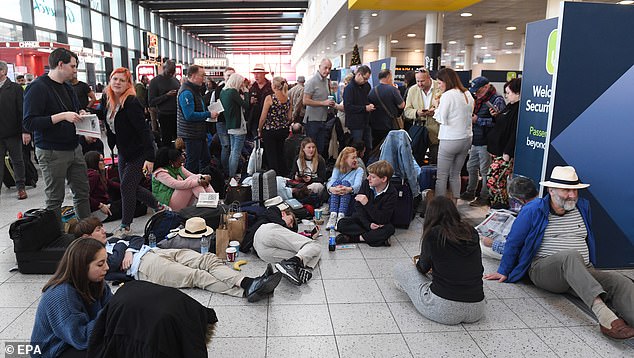 Passengers wait on the floor at Gatwick on Thursday amid a drone attack on the airport, which has been declared an ‘extraordinary circumstance’ beyond airlines’ control

The Civil Aviation Authority said this afternoon: ‘Under EU261 regulations, passengers that no longer wish to take their flight can contact their airline for a refund.

‘For those passengers that do still wish to fly, we advise them to contact their airline to understand the options available.’

‘Given the reasons for the current disruption at Gatwick Airport, the Civil Aviation Authority considers this event to be an extraordinary circumstance.

‘In such circumstances airlines are not obliged to pay financial compensation to passengers affected by the disruption.’

EU regulation 261, made in 2004, says carriers do not have to pay in ‘extraordinary circumstances which could not have been avoided even if all reasonable measures had been taken’.

The regulation says: ‘Such circumstances may, in particular, occur in cases of political instability, meteorological conditions incompatible with the operation of the flight concerned, security risks, unexpected flight safety shortcomings and strikes that affect the operation of an operating air carrier. 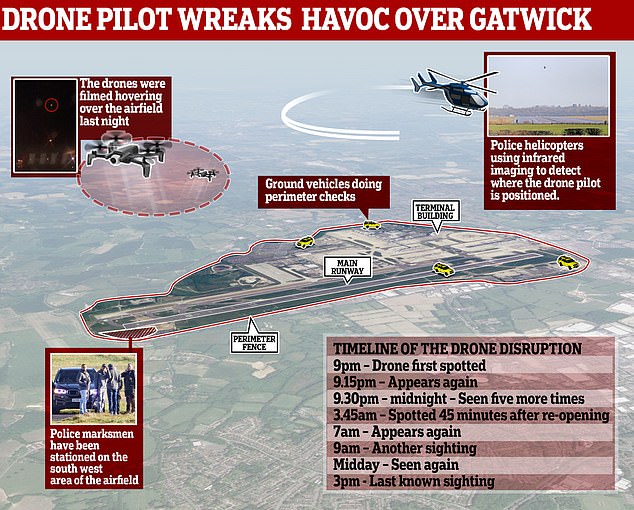 ‘Extraordinary circumstances should be deemed to exist where the impact of an air traffic management decision in relation to a particular aircraft on a particular day gives rise to a long delay, an overnight delay, or the cancellation of one or more flights by that aircraft, even though all reasonable measures had been taken by the air carrier concerned to avoid the delays or cancellations.’

British Airways has advised passengers to keep receipts, saying it would handle any claims ‘in accordance with EU legislation’.

The UK Government has said consumer protection will ‘not fall below’ regulation 261 after Britain leaves the European Union.

The runway has been closed almost constantly since two drones were spotted being flown inside the West Sussex airport’s perimeter at 9pm on Wednesday.

Police described the devices as ‘industrial’ models and are treating the incident as ‘a deliberate act to disrupt the airport’.

The military was called in as flight cancellations soared this afternoon but the airport remained closed to passengers as darkness fell.