The land with no face masks: Holland’s top scientists say there’s no solid evidence coverings work and warn they could even damage the fight against Covid-19

As I walked around the sun-dappled streets of Amsterdam, something felt strange in this world swept by fear and pandemic. There was laughter coming from barges sliding along the famous canals, clusters of cyclists clogged the streets, shoppers dipped into chic boutiques, the barber shops seemed busy and cafes served couples chatting over coffee.

I heard many voices of tourists in bars and restaurants, while even the seedier sides of this celebrated Dutch city had people strolling through them. It took me a moment to realise what was so weird. Then it struck me. It felt like I had stepped back in time, returning to the pre-pandemic normality of a bustling city filled with human beings whose faces were not covered by cloth.

For while 120 countries in the world, including much of Europe, have ordered citizens to wear masks in public places to prevent the spread of Covid-19, the Dutch are doing things differently.

The nation’s top scientists, having examined key data and research, have declared there is no firm evidence to back the use of face coverings. Indeed, they argue that wearing the wretched things may actually hamper the fight against disease. 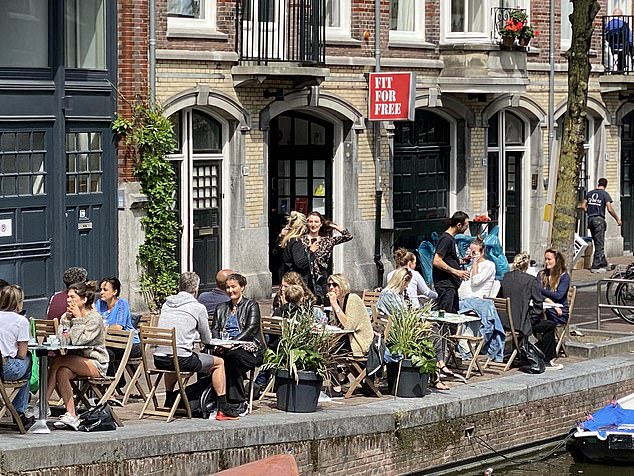 While 120 countries in the world ordered citizens to wear masks in public places to prevent the spread of Covid-19, the Dutch are doing things differently. Pictured, people enjoying a drink in Amsterdam

‘Face masks in public places are not necessary, based on all the current evidence,’ said Coen Berends, spokesman for the National Institute for Public Health and the Environment. ‘There is no benefit and there may even be negative impact.’

This is a bold but highly controversial stance – especially as fears grow of a second wave sweeping through Europe. Last week, Downing Street joined the global stampede to enforce face masks in public spaces such as shops, supermarkets and stations, following Scotland, Spain and France, along with Holland’s neighbouring nations of Belgium and Germany.

‘We think masks have a great deal of value,’ said Boris Johnson. ‘Scientific evaluation of face coverings and their importance in stopping aerosol droplets has been growing. People should wear them in shops.’

But the Dutch disagree – to the delight of all the citizens I spoke with in Amsterdam. ‘I hate wearing them,’ said Aicha Meziati, 29, in the hip fashion store Das Werk Haus. ‘They are horrible. People look like they have nappies on their faces.’

Margriet, a 24-year-old sales assistant in a pop-up drink shop, said it was hard to read people’s facial expressions when they wore masks. ‘You make contact with people better without them and it is easier to talk to them in the store.’

Holland’s position is based on assessments by the Outbreak Management Team, a group of experts advising the government. It first ruled against masks in May and has re-evaluated the evidence several times, including again last week.

It believes they detract from a clear three-pronged message that has kept deaths from coronavirus down to less than half the rate in Britain: wash hands regularly, maintain social distancing of 1.5 metres and stay at home if suffering any symptoms.

The one exception outside of the medical frontline has been on public transport, where masks are mandatory on the basis it is difficult to stay apart on crowded buses, ferries and trains. ‘We have seen this approach works,’ said Christian Hoebe, a professor of infectious diseases in Maastricht and member of the advisory team. ‘Face masks should not be seen as a magic bullet that halts the spread.

‘The evidence for them is contradictory. In general, we think you must be careful with face masks because they can give a false sense of security. People think they’re immune from disease or stop social distancing. That is very negative.’

Hoebe, head of infectious disease control in Zuid-Limburg, the region hit hardest when the pandemic struck Holland, pointed to a Norwegian study showing 200,000 people must wear surgical masks for one week to stop a single Covid-19 case. 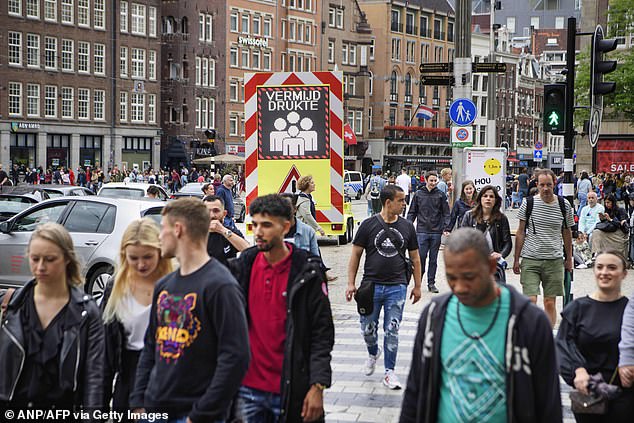 Holland’s top scientists, having examined key data and research, have declared there is no firm evidence to back the use of face coverings. Pictured, day trippers and tourists walk in Amsterdam on July 25

Yet few people have medical masks – in Britain they are rightly preserved for the NHS – while wearers routinely misuse or contaminate their coverings by fitting them incorrectly, failing to change them and touching their faces.

‘I was in Belgium recently and saw many people putting them beneath their noses, upside down or under chins’, says Hoebe. ‘Others stuffed them in their pockets. The effectiveness also depends on the right fabric and the mask being worn very close to the nose.’

Studies by one membrane specialist at Eindhoven University found that while the coronavirus particles are caught by an electrostatic layer in medical masks, they can penetrate bigger pores found in cotton and even vacuum cleaner bags.

The World Health Organisation has also been sceptical, warning that ‘widespread use of masks by healthy people in the community setting is not yet supported by high-quality or direct scientific evidence’.

Although changing its advice in June to back the encouragement of mask wearing in some settings, the WHO lists 11 ‘potential harms’ that range from discomfort through to self-contamination and lower compliance with more critical preventative measures.

As in some other European countries, Holland has seen an alarming recent rise in reported infections, which have almost doubled to 1,329 cases over the past two weeks, combined with marginally higher rates of hospitalisation and fatality.

Yet the cabinet’s advisory team says this was driven by clusters of people infecting each other at family gatherings and parties, where they would not have worn masks regardless of any changes to rules about public spaces.

Another outbreak came from a bar in Hillegom, near Amsterdam, where the owners told customers they could sit close together, shake hands and hug since the virus was dormant. ‘We know what we are doing,’ they wrote on Facebook. They were quickly proved wrong, however, after 39 cases were traced to the bar. It has since been closed and the social media post removed.

Holland, a country of 17 million people, has seen 6,147 pandemic deaths after adopting what it called ‘intelligent lockdown’, which imposed significantly fewer restrictions than Britain and relied more on trusting citizens to behave sensibly.

Although two recent polls claim a majority backing use of face masks for indoor public spaces, I found people on Amsterdam’s busy shopping streets supported their government’s stand and seemed very aware of the simple rules. 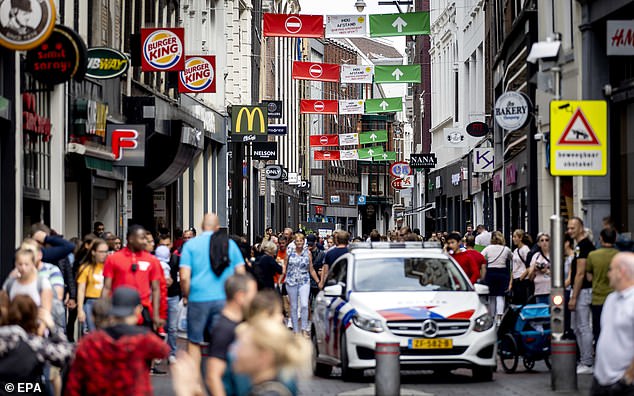 Holland, a country of 17 million people, has seen 6,147 pandemic deaths after adopting what it called ‘intelligent lockdown’. Pictured, tourists on the Nieuwendijk in Amsterdam on July 23

‘I like it when people can decide for themselves,’ said Jesus Garcia, wielding the clippers in Barbershop Jordaan filled with mask-free staff and customers. ‘You would have to really educate people how to use them properly for safety.’

He said he had worn masks during a trip to Spain. ‘I did not feel it was really helping since people were wearing them all wrong, putting them in their pockets, placing them under their noses. It defeats the purpose.’ One customer having a trim agreed. ‘I find face masks absolutely awful. They’re claustrophobic and don’t work,’ said Mark Casey, corporate finance partner at a major accountancy firm.

Coriem Warmenhoven, serving in a flower shop, said she was glad they did not have to wear masks. ‘I’m afraid it will become necessary,’ she said. ‘We must deal with the virus but it is best to be intelligent and give people responsibility.’

She is right to be nervous. The mayors of Amsterdam and Rotterdam, the nation’s two biggest cities, have been pressing for more power to impose mask-wearing in crowded areas, which was granted last week. Amsterdam mayor Femke Halsema, alarmed by throngs of tourists and young people making parts of her city too crowded, is insisting on compulsory masks for anyone aged over 13 in the Red Light District and two popular shopping streets.

Warmenhoven told me she was going to holiday in Holland after discussing with her husband where to go. ‘He said he didn’t want to go anywhere abroad that you have to wear masks,’ she said. This bears out the hunch of the Netherlands Board of Tourism and Conventions, which has commissioned research to find out if freedom from face masks gives their country an edge in the struggle to entice dwindling numbers of tourists.

Ben Coates, the author of Why The Dutch Are Different, who lives in central Holland, said the speed with which normal life had returned in the country was remarkable.

‘When you walk around, you are hard-pressed to see much difference now,’ he said.

He added that while Dutch citizens tended to trust their governments, they also had strong libertarian instincts. ‘People don’t like being told what to do, so they will cycle without helmets and sleep with whom they want.’

The one family I found wandering along the canals clad in face masks turned out to be holidaying Italians from near Milan. ‘We have been wearing them all the time for five months, so they don’t feel uncomfortable any more,’ said Michaele Muller. He added that they had been astonished when they arrived in Holland. ‘We drove through Switzerland, where everyone has a mask, then in Germany, where it is also mandatory. Then we crossed the border and suddenly no one was wearing them.’

Later, I came across a British accent belonging to a scientist who had just moved from Milton Keynes to a new job in the city. ‘It feels very different from the UK,’ said Jenny White. ‘It feels much more normal here. You can almost forget about the disease.’