Baffled Shane Clarke, 60, opened his front door on Saturday morning to find an e-scooter pile-up outside his property in a posh suburb in Bristol.

Retired medic Shane said people had been leaving some Voi scooters outside his house at the top of Elm Lane off Whiteladies Road for a while.

But he suspects other locations may have been removed from a list of designated scooter parking spots from an official app.

He thinks his house is now the only option to leave scooters in the area.

Shane said: ‘We lost count at one point so we might have broken the hundred mark. 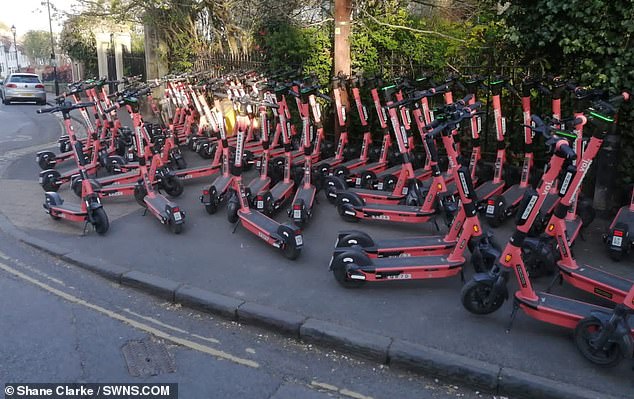 Baffled Shane Clarke, 60, opened his front door on Saturday morning to find an e-scooter pile-up outside his property in a posh suburb in Bristol (pictured: Dozens of the scooters were lined up on Friday 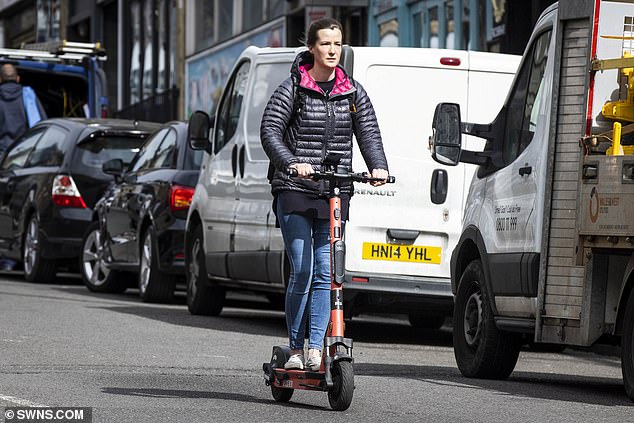 Voi scooters can be rented in Bristol, Bath and South Gloucestershire through the West of England Combined Authority’s trial scheme

Where have are the e-scooter trials taking place?

‘What would be really helpful is if somebody had said ‘sorry about this, we’ll work on it’.

‘The sub-contractors who came to collect them said ‘bloody hell we’ve not seen anything like this’.

‘My wife saw one of our local elderly residents tripping up over a scooter outside.

‘I found a couple of Thatcher’s cans and bottle just chucked into our front garden.’

The scooters have since been cleared by the council from outside the home – which is just across from a massive park – the Bristol Downs.

Voi scooters can be rented in Bristol, Bath and South Gloucestershire through the West of England Combined Authority’s trial scheme.

The use of scooters use is controlled via an app – Each scooter is ‘geo-tagged’ meaning they will only operate in certain zones, and at limited speeds.

Users have to park them in designated parking spots generally on broad pavements – If not – the app can fine them.

Only adults with a driving licence are allowed to hire e-scooters.

Mr Clarke emphasised he has no issues with the scooters being trialed in Bristol.

However, he feels the way in which they’re stored need to change.

He added: ‘From my point of view I have no problem at all with the scooters apart from the obvious – sometimes they’re not ridden responsibly. I think they’re a nice idea.

‘Talking to other hirers – they’re asking “where is the alternative nearest parking space?”

‘They’re saying this is the most convenient spot.

‘As they’re supposed to be on road – if we’re going to go ahead with the experiment it would make sense for them to be somewhere with space around them, perhaps the waterfront.

‘Or alternatively give over parking spaces for them. But I guess that would be a whole other debate as to whether residents would be happy with that.’

It has been over five months since a Government trial scheme saw e-scooters pop up across the South West, including in Gloucester, Yeovil, Bristol and Bath.

While privately-owned scooters are still illegal to use on public roads and pavements, the scheme has been launched to see how well they mix on the region’s roads.

The Bristol scheme is being co-ordinated by the West of England Combined Authority with Voi operating the scheme. 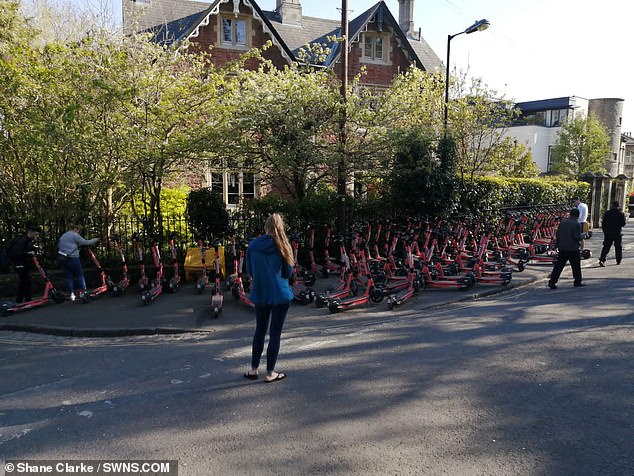 The use of scooters use is controlled via an app – Each scooter is ‘geo-tagged’ meaning they will only operate in certain zones, and at limited speeds. Users have to park them in designated parking spots generally on broad pavements – If not – the app can fine them

Meanwhile, a spokesperson for the local council said: ‘The e-scooter trial in Bristol is being managed by Voi and the West of England Combined Authority (WECA) and while the council has no power to enforce traffic offences, we are continuing to work with them to address ongoing issues and ensure they reinforce the message that users should use and park e-scooters responsibly.’

Richard Corbett, the Regional General Manager of Voi UK & Ireland, previously told ITV News West Country: ‘E-scooters are here to really solve the transport challenge that we have in the UK.

‘We need to find an alternative form of transport to riding by car – 50 per cent of nitrogen dioxide in our atmosphere is from road transport.’

It comes as an investigation by the Mail today revealed how robberies, assaults and even a drive-by shooting are among hundreds of crimes involving thugs on electric scooters.

The crimewave has been disclosed by police in areas that have given the go-ahead to e-scooter pilot schemes.

The new E-scooter crimewave: Hundreds of crimes including robberies and assaults are being committed by thugs on electric scooters, investigation reveals

By George Olding and Archie Mitchell for the Daily Mail

Robberies, assaults and even a drive-by shooting are among hundreds of crimes involving thugs on electric scooters, a Mail investigation reveals.

The crimewave has been disclosed by police in areas that have given the go-ahead to e-scooter pilot schemes.

Other reported offences include shoplifting, drug possession and suspects using them to escape arrest.

Pedestrians were run down by the contraptions being illegally used on pavements, while in one shocking incident a scooter was seen towing a trailer on a 60mph-limit road. Riders were also stopped using an e-scooter while drunk or high on drugs.

It comes despite Transport Secretary Grant Shapps proclaiming e-scooters part of a ‘transport revolution’ involving greener and zero-emission forms of travel. Last spring he fast-tracked their legalisation for trials. The Mail sent freedom of information requests to police forces covering more than 20 cities and towns across Britain where the devices are on trial or about to be piloted. 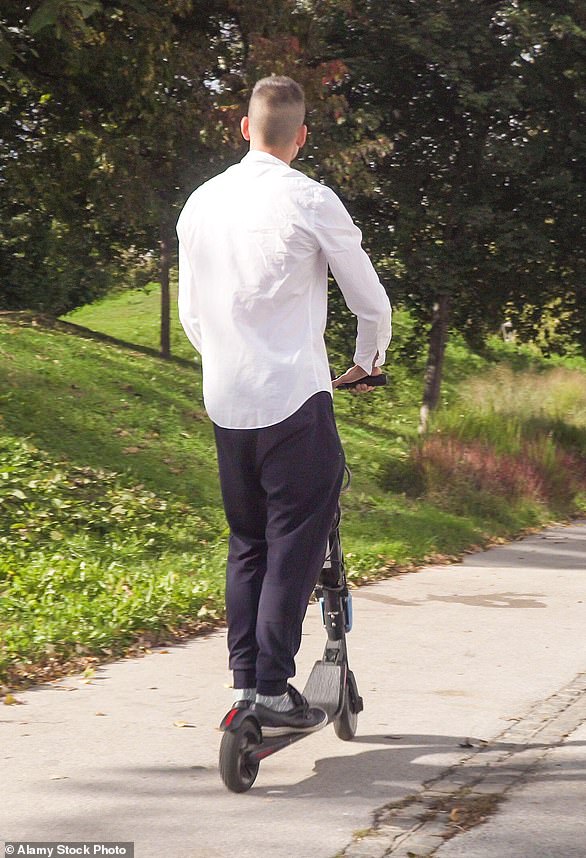 Norfolk police recorded more than 120 incidents involving them last year, including an electric scooter seen pulling a small trailer on a main road and ‘swerving from side to side’.

In London, where e-scooters will go on trial in the coming months, Scotland Yard recorded more than 200 incidents last year, the highest of any force that responded. The Met said it seized more than 150 devices.

One report of a gun crime described it as an ‘allegation of discharge by person on scooter’. Cleveland police recorded 81 incidents, Derbyshire recorded 27 while Staffordshire notched up a total of 23.

The findings prompted MPs to warn e-scooters are ‘unwanted’ even as the Government considers legalising them nationwide.

Campaigners last night called on ministers to toughen up the rules for private sales, as individuals can buy them from shops or online despite them being illegal on the roads.

Peter Bone, the Tory MP for Wellingborough, where e-scooters are available for hire in a government-backed trial, said: ‘The initial reaction from my constituents is that they’re unwanted. One candidate in the local elections told me that on the doorstep the number one priority was electric scooters.’

Retailers reported a boom in sales of e-scooters last year amid lockdown. They typically cost from £350, with high-end models running up to nearly £1,000. Their top speeds are capped at 15.5mph but they can be modified to go up to 70mph.

The vast majority of alleged crimes are thought to have involved privately-owned e-scooters rather than government-backed devices on trial.

Only the latter are legal to ride on roads and hirers must prove possession of a valid provisional or full UK driving licence. Ministers are not set to make a decision on whether to fully legalise their use until at least the end of the year.

David Davies, director of the Parliamentary Advisory Council for Transport Safety, said the lobby group had written to roads minister Rachel Maclean calling for tighter regulation such as age checks on private buyers.

He said: ‘We have an interim situation where the Department for Transport is monitoring trials, meanwhile people are buying them hand over fist in shops and clearly using them and we don’t feel retailers are necessarily being responsible.

‘The restrictions are not tough enough on sale as there’s no regulation at all.’

Of the Mail’s findings, he said: ‘What this shows is that they’re a bloody menace.’ Chris Theobald, of charity Guide Dogs, said: ‘People are increasingly encountering scooters on pedestrian pathways and blind people have to navigate using their hearing so it’s a huge problem for them.

‘With their power and speed people are scared and fearful of going out on the streets.’

The DfT said it was aware of ‘a minority of instances where e-scooters have been misused’ and that feedback from the trials will help ‘inform the need for any future regulation of them’.