Hong Kong: Michelle Shek and Edwin Mak weren't yet born when the tanks rolled into Tiananmen Square 30 years ago, but they joined a dozen students re-enacting the event for Hong Kong commuters on Tuesday night. 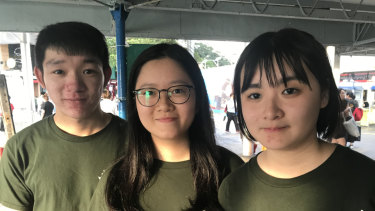 Edwin Mak, 23 and right, Michelle Shek, 19, performed a dramatisation of the Tiananmen Square crackdown for commuters at a Hong Kong ferry terminal on the evening of June 3.Credit:Kirsty Needham

As the crowd rushed from the Tsim Sha Tsui ferry terminal, the students from Hong Kong Shue Yan University sang songs and read solemnly about the evening of June 3, 1989, when the People's Liberation Army began firing on Chinese students.

A group of mainland Chinese tourists following the flag of their leader gathered for a moment in front of the performance, which featured a cardboard tank. Their leader quickly moved them on.

Shek, 19, said: "We know China bans this message and in China many people don't know this even happened. Hong Kong is the only place we can share this information."

She learnt about the Tiananmen Square incident in school from her teachers, but is concerned that "nowadays teachers talk less about it".

The June 4 anniversary "triggers us to think more about democracy in China, and Hong Kong political issues".

Big crowds are expected to attend a night time candle-lit vigil in Hong Kong's Victoria Park on Tuesday night as concerns about human rights in China grows. The Hong Kong government is seeking to introduce an extradition law that could see criminal suspects extradited to mainland China for the first time.

Mak, 23, said he only learnt about the Tiananmen Square killings this year.

"My school didn't talk about it. The Hong Kong government nowadays is almost like the Chinese government. I think my secondary school has [faced] some pressure from China," he said.

"I know that many Chinese people don't know, and some Hong Kong people choose to avoid the event. It is real. That’s why today I choose to make this drama to let people know what happened 30 years ago."

Mak is aware the students who led the Umbrella movement in Hong Kong in 2014 had been jailed for their actions after thousands of protesters brought the city centre to a standstill for months, demanding free elections for a Hong Kong leader.

In the aftermath, Chinese president Xi Jinping warned Hong Kong's youth in 2017, at the 20th anniversary of the former British colony's handover to China, not to cross Beijing's red line. His speech appears to have spurred Hong Kong prosecutors to step up action against student leaders and opposition politicians pushing for independence.

But instead of taking the jailings as a warning, Mak thinks it gives more reason to protect Hong Kong's liberties.

He says the Chinese students in 1989 and the Umbrella movement "are almost the same – they wanted democracy". 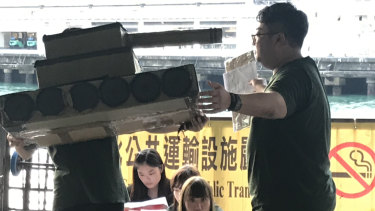 "One success after the Umbrella movement is that we want to learn more about society," he says.

An annual poll conducted for the University of Hong Kong showed 62 per cent of Hong Kong people believed they had a responsibility to instigate democracy on the mainland, higher than last year.

Fifty-nine per cent believe the Chinese government should reverse its official position on the June 4 incident, which is that it was counter-revolutionary turmoil.

I choose to make this drama to let people know what happened 30 years ago.

The Chinese government has refused to hold an investigation into the Tiananmen crackdown, nor released an official death toll, and insists the killings brought stability to China.

The Chinese embassy in Washington issued a terse response on Tuesday to a statement by US Secretary of State Mike Pompeo criticising China for "violently repressing peaceful demonstrations calling for democracy.

The Chinese embassy accused the US of grossly interfering in China's internal affairs and said Pompeo had smeared China's domestic and foreign policies.