Hospitals ‘are told to prepare for vaccine rollout in 10 days’: Pfizer jab could arrive by December 7 with NHS staff first in line

Hospitals in England have been told to prepare for the rollout of a Covid-19 vaccine in as soon as 10 days, it has been reported, with NHS staff first in line to receive it.

According to The Guardian, hospitals could receive the first deliveries of the vaccine created by Pfizer/BioNTech between December 7 and December 9, with the newspaper citing sources at several hospitals across the country.

This vaccine, which reported early results suggesting the jab is 95 per cent effective, needs to be stored at extremely low temperatures.

The newspaper said one senior hospital executive had been told to expect the vaccine on December 7 to give to NHS staff during the following week. 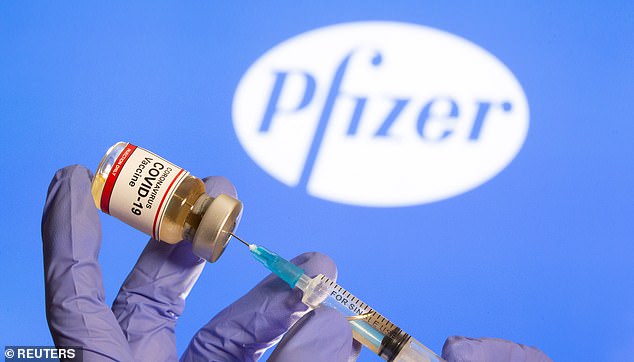 According to The Guardian, hospitals could receive the first deliveries of a vaccine created by Pfizer/BioNTech between December 7 and December 9, with NHS staff first in-line to receive it

But this timeframe will depend on if and when the jab is approved by the Medicines and Healthcare products Regulatory Agency (MHRA).

So far, no date has been confirmed by NHS England for the rollout of the jab as there are still several steps to go through – including MHRA approval.

However, it is also understood that 10 days would be a reasonable time frame should the vaccine be approved soon.

On November 20, the Health Secretary said he had formally asked the medicines regulator to assess the Pfizer/BioNTech vaccine for use in the UK.

Matt Hancock hailed it as ‘another important step forward in tackling this pandemic’.

But he said while the regulator’s approval would see a rollout ready to start next month, there is ‘still a long way to go’.

The MHRA confirmed on Monday it had received the necessary data to progress its review into whether the Pfizer/BioNTech vaccine meets the required standards.

The Guardian also reported the Pfizer vaccine will be given to NHS staff first due to its short shelf life and the logistical difficulties transporting the jab.

From the moment the Pfizer vaccine leaves the factory in Belgium it can only be taken out of minus 70C four times before it is injected into a patient’s arm. 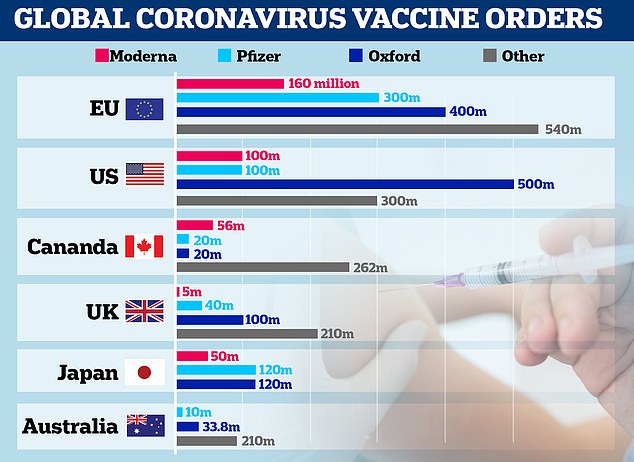 Pictured: A graph showing vaccine orders made by the EU, US, Canada, UK, Japan and Australia. The UK has ordered 40 million units of the Pfizer/BioNTech vaccine

Downing Street said there were ‘no plans’ to have the Union flag printed on the Oxford University and AstraZeneca coronavirus vaccine, following reports that Number 10’s ‘Union Unit’ had asked for the British flag to appear on packaging.

The Prime Minister’s official spokesman told reporters: ‘There are no plans for the Union Jack to be on doses.

‘We’ve said previously the manufacturing for some of the leading potential vaccines is already under way so they can be rolled out quickly if and when approved.

‘Manufacturers are well versed in the best ways to package products like this.’

Interim guidance from the Joint Committee on Vaccination and Immunisation (JCVI) prioritised older care home residents before health and social care workers, who were on equal footing with the over-80s.

However, the JCVI’s guidance also stated the final decision on how health and social care workers would be prioritised would depend on the vaccine’s characteristics.

The UK has also ordered 100 million doses of a vaccine from AstraZeneca and Oxford University, which does not need to be kept at such low temperatures.

The Oxford jab has also been sent to the MHRA for approval.

Senior health officials previously said GPs in England will be given 10 days’ notice before any Covid vaccine rollout begins.

The news comes after one of Number 10’s top scientists claimed there is enough evidence showing Oxford University’s coronavirus vaccine works to approve the jab next month amid a row over the ‘shaky science’ behind its promising results.

The expert, who wished to remain anonymous, said there was ‘nothing unusual’ or worrying about the studies, despite independent scientists voicing concerns about about their methods.

Officials last night asked the Medicines and Healthcare products Regulatory Agency (MHRA) to consider giving emergency approval for the jab, so that it could be given out from next month if it is deemed safe and effective.

The senior Government source added they had faith the UK’s drugs watchdog would ‘look carefully’ at the data, adding there is ‘probably enough there overall to approve’ it. 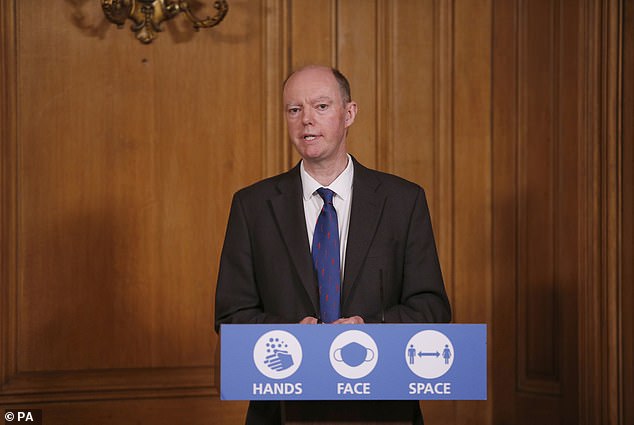 Confusing trial results from Oxford found under-55s accidentally given too little of the vaccine actually had better protection from coronavirus than those who got the full doses, making it unclear how effective the vaccine really is.

The MHRA is doing the same analysis of Pfizer’s jab and ’emergency approval’ does not bypass any safety checks but means it can be given out as soon as regulators are satisfied, rather than waiting for official paperwork to be finalised. This was made possible by a specific new law brought in during the summer.

Oxford’s trial results this week suggested the vaccine is somewhere between 62 and 90 per cent effective, depending on the dosage people are given.

The jab turned out to be most effective among 2,741 volunteers accidentally only given a half-dose the first time they had the injection, followed by a full dose. But none of those were over 55, according to reports, meaning they didn’t represent the vulnerable group who will rely on the vaccine in the real world.

Scientists said claiming the vaccine could be 90 per cent effective for everyone based on that chance result was ‘shaky science’ and its manufacturer, AstraZeneca, yesterday announced it would carry out another clinical trial to confirm the results. 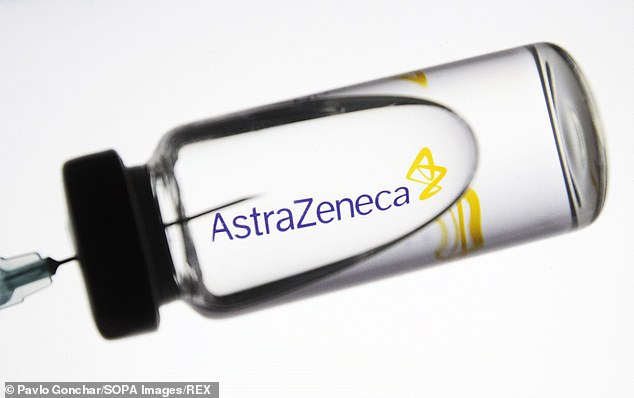 Exactly how well the vaccine being developed by Oxford University and AstraZeneca works is not yet clear, because an error in the dosing made it more effective in some people but scientists say there weren’t enough people in that group to be sure of the results

The company’s share price has dropped by almost eight per cent since it unveiled the results on Monday amid confusion over whether the dosing error will harm the vaccine’s chances of approval. There are doubts about how it will go down in the US, which has pre-ordered 500million doses of the jab.

If the vaccine turns out to be less effective than Pfizer’s, Britain could face ‘tough choices’ about whether to give more people that one, according to one expert.

Professor David Salisbury, a former vaccines director at the Department of Health, said on Radio 4 today: ‘If it comes through at 62 per cent and the other vaccines that are coming through so far at 90 per cent then I think you have to think very carefully: what do we with 100million doses of a product that isn’t protecting as well as the alternatives?’

Prime Minister Boris Johnson was under mounting pressure today to change the course of his coronavirus lockdown plans as Tory rebels threaten to revolt in a crunch vote next week.

The seven-day-average number of daily cases – considered a more accurate measurement because it takes into account day-to-day recording fluctuations – is now 16,725, after declining for 12 days in a row. 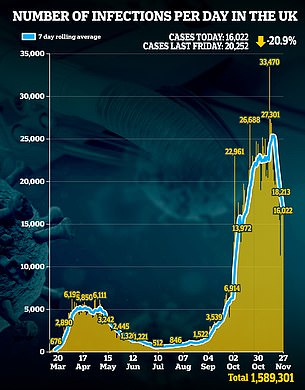 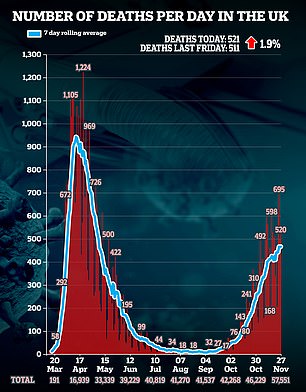 Covid-19 deaths lag two to three weeks behind the infections trend due to the time it takes for people to fall seriously ill with the disease.

Experts anticipate deaths will finally start to tail off next month, after the country’s second lockdown has ended.

It came as a weekly report by SAGE – Number 10’s Scientific Advisory Group for Emergencies – found the UK’s coronavirus ‘R’ rate may have fallen below the crucial number of one.

The Prime Minister announced yesterday all but three places in England will be plunged into the toughest brackets when the national shutdown ends on December 2 – affecting 99 per cent of the population.

But the PM defended the controversial new system today, saying while he ‘totally understood’ why people were upset it was not possible to treat neighbouring places differently.

HOW DO THE OXFORD, MODERNA AND PFIZER/BIONTECH VACCINES COMPARE?

Moderna and Pfizer/BioNTech have both released interim results of the final stage clinical trials of their vaccines, with both suggesting they are extremely effective.

Oxford University has published the findings from its second phase, which show the jab provokes an immune response and is safe to use – it is not yet clear how well it protects against coronavirus in the real world.

Here’s how they compare:

mRNA vaccine – Genetic material from coronavirus is injected to trick immune system into making ‘spike’ proteins and learning how to attack them.

mRNA vaccine – both Moderna’s and Pfizer and BioNTech’s vaccines work in the same way.

Recombinant viral vector vaccine – a harmless cold virus taken from chimpanzees was edited to produce the ‘spike’ proteins and look like the coronavirus.

How well does it work?

How much does it cost?

Can we get hold of it?

UK has ordered five million doses which will become available from March 2021. Moderna will produce 20m doses this year, expected to stay in the US.

UK has already ordered 40million doses, of which 10million could be available in 2020. First vaccinations expected in December.

UK has already ordered 100million doses and is expected to be first in line to get it once approved.

What side effects does it cause?

Moderna said the vaccine is ‘generally safe and well tolerated’. Most side effects were mild or moderate but included pain, fatigue and headache, which were ‘generally’ short-lived.

Pfizer and BioNTech did not produce a breakdown of side effects but said the Data Monitoring Committee ‘has not reported any serious safety concerns’.

Oxford said there have been no serious safety concerns. Mild side effects have been relatively common in small trials, with many participants reporting that their arm hurt after the jab and they later suffered a headache, exhaustion or muscle pain. More data is being collected.