With the mercury soaring this Bank Holiday, DAVID LEAFE looks back at how Britain kept its cool when the last Easter heatwave hit 70 years ago

On that sweltering Good Friday in April 1949, the three London bobbies ordered to pace up and down the banks of the Serpentine lake in Hyde Park would probably have preferred to be sitting beside it in deck chairs.

Yet there they were, roasting in their thick tunics and heavy helmets as they confronted people naughtily taking a dip before the start of the official bathing season a fortnight later. And, as they hauled swimmers out of one stretch of water, others dived in elsewhere, desperate to cool off during the hottest Easter ever recorded.

That weekend temperatures reached 84.9F (29.4C) in London’s Camden Square and over the next few days we are set to enjoy weather which will be almost as glorious.

Highs of 77F (25C) are forecast and, if it’s anything like the scorcher the country enjoyed exactly 70 years ago, it will bring out the best in the British public — and also some of the worst.

Certainly, the Duke of Marlborough might have thought so. In 1949, he temporarily closed Blenheim Palace to visitors after Easter day-trippers climbed fences and entered a private part of the grounds, picking flowers.

However, such behaviour was the exception and, loutish though it was, it reflected the determination of a nation still recovering from war to get outdoors and, as one newspaper put it, regain ‘some of the gaiety of holiday-making in former times’. 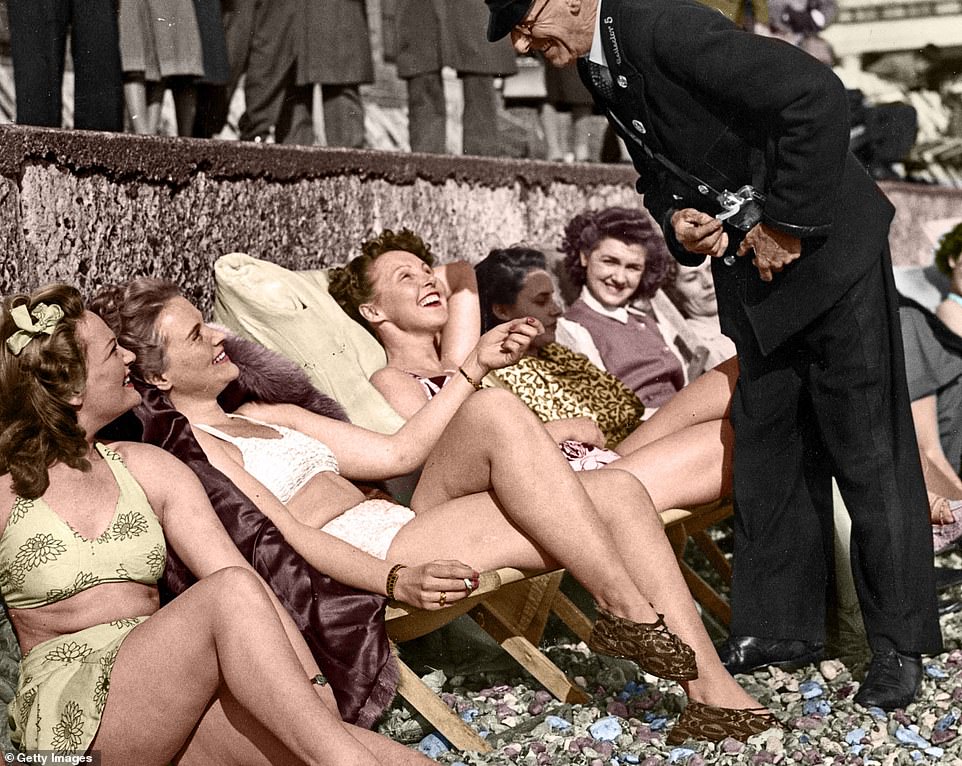 An unexpected bout of Winter sunshine brought out sunbathers at a beach in Eastbourne, Sussex, in February 1949 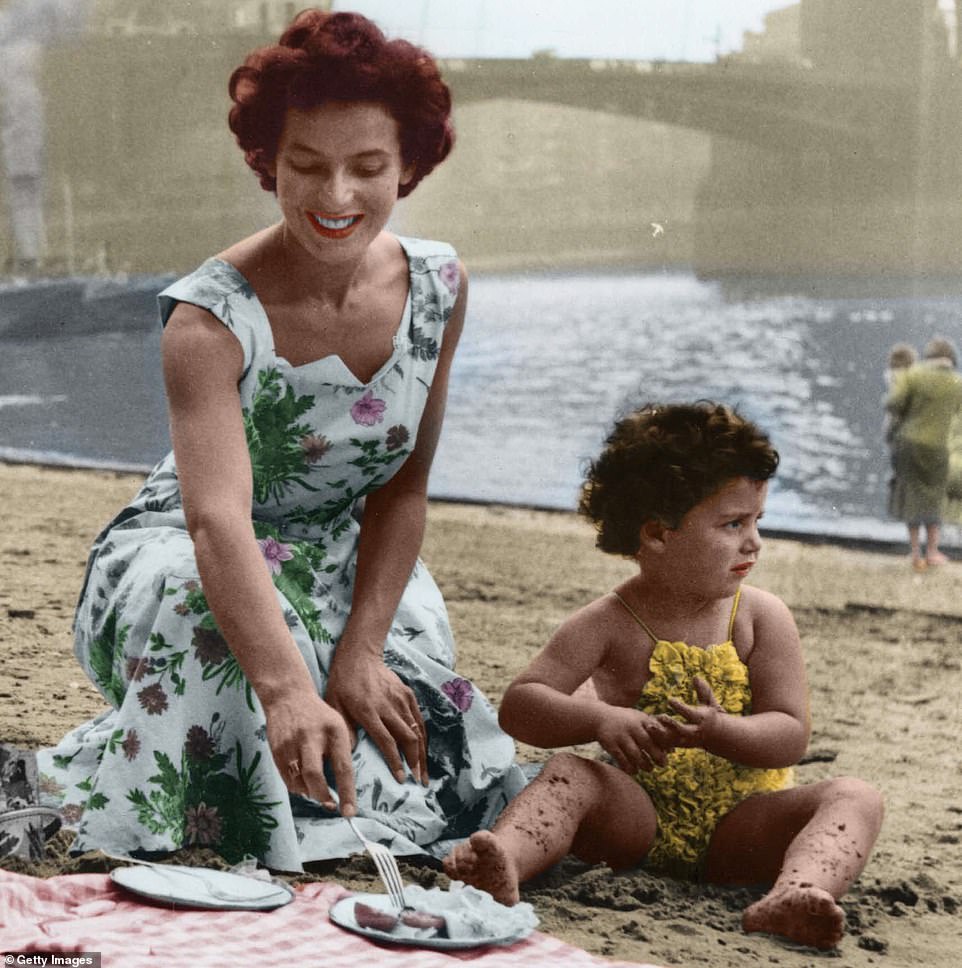 Pictured: Miriam Gags, with her daughter Naomi, enjoys a picnic at London’s ‘Little Seaside’ in 1949 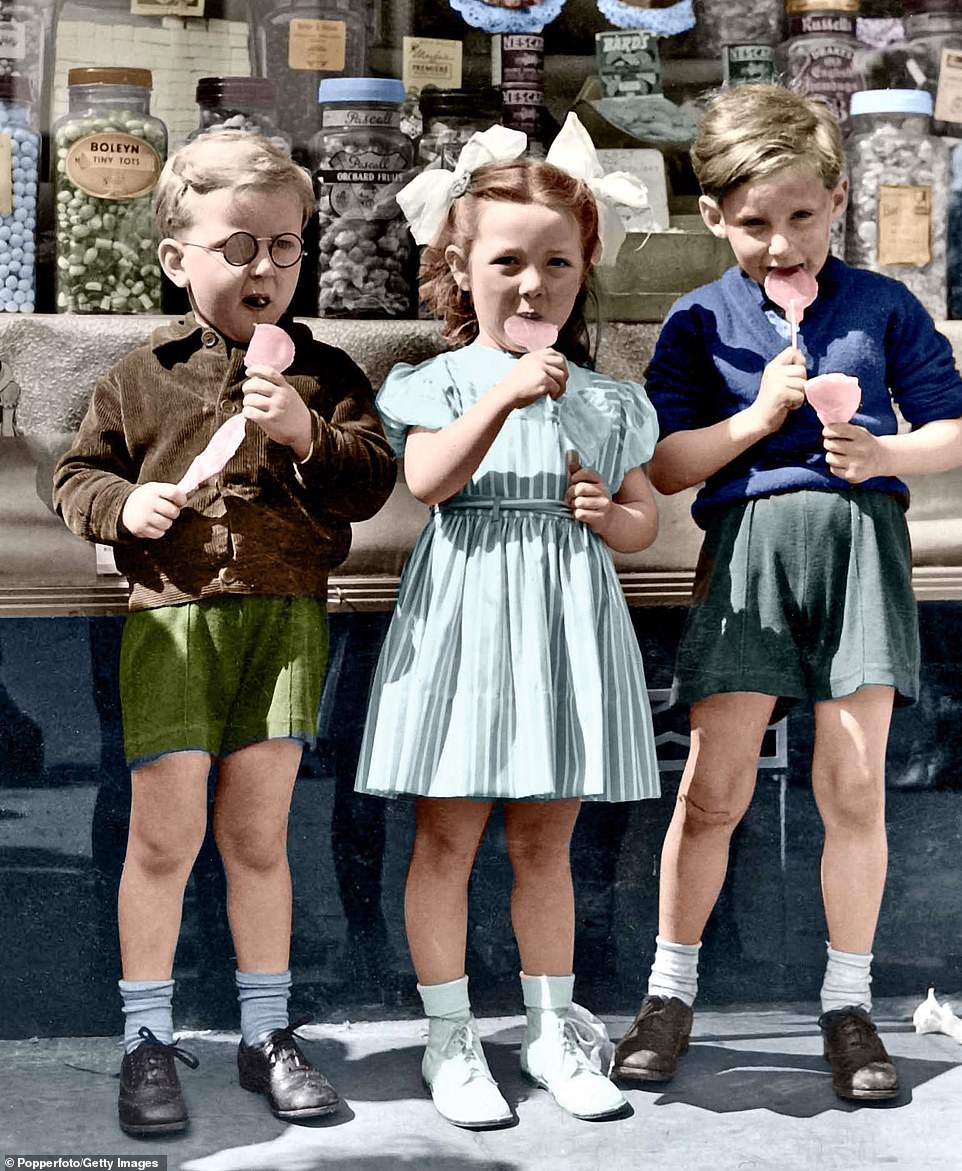 Three children enjoy lollipops from a sweetshop in Hackney, east London, at the end of post-war rationing in April 1949

For most people it was a ‘stay-cation’ — not that they had heard of that word, or of the ‘pollen bombs’ which we are warned this weekend’s weather could bring.

From towns and cities across the country, there was an exodus to the seaside, with Blackpool alone expecting 150,000 visitors, 90,000 arriving on 119 specially time-tabled trains.

The other 60,000 were expected to travel by bus or car, and although Britain then had only two million motorists — compared to 45 million today — the AA predicted that most of them would be out, with the road from Preston to Blackpool being a particularly notorious bottleneck.

For those who could endure the traffic jams, Blackpool offered what a British Pathe newsreel claimed was ‘sunshine which puts the Riviera to shame,’ albeit with somewhat less sophisticated attractions. These included sideshows featuring ‘Alice — the Jolly Fat Girl’ and a diminutive beauty billed as ‘La Belle Bubbles — the Pocket-Sized Glamour Girl.’

On the Essex coast, the sunshine saw steady sales of oysters at three shillings for half a dozen, while ‘shrimp teas at 10d a time have been popular — and the Southend whelk has held its own, at 6d a saucer’.

In Weston-super-Mare, Somerset, it was reported that the ‘highly improbable picture on so many guide-book covers has come to life’ with ‘carefree mother knitting in a deck chair, father asleep, full-length on the sand with a newspaper over his head, the kids gorging ice-cream and exhausting themselves in the drenching sunshine’.

That article makes no mention of what the mum in question was wearing but the Hull Daily Mail reported a reassuring trend in women’s swimwear, describing ‘how bare midriffs were recently fashionable, displayed, alas, all too often by the wrong figure’ but were thankfully being replaced by ‘a more covered look’.

Some holidaymakers found ingenious methods of cutting the cost of a weekend away. In Folkestone, Kent, visitors slept on the beach in deck-chairs.

Meanwhile, four-deep queues stretched for 200 yards beyond the entrance to Bristol Zoo, a local newspaper revealing how the holiday had led to ‘a great deal of work for Rosie the elephant who earned eight shillings a minute by carrying small boys and girls upon her back, and made at least 1,000 threepenny trips each day’.

At a park near the centre of bombed-out Coventry, that Easter was an interlude where, for a few hours at least, it might be imagined that the war had never happened. ‘Fathers fussed with the intricacies of clockwork motor-boats, youngsters sailed yachts, and here too were the recumbent figures of Conventrians who found sunshine sleepy.’

The same tranquillity could be found at religious services across the country and in Sittingbourne, Kent, there were ‘crowded congregations at all churches’.

The usual Easter treats were a problem because even those foods not still on the ration were in short supply during those years of post-war austerity. 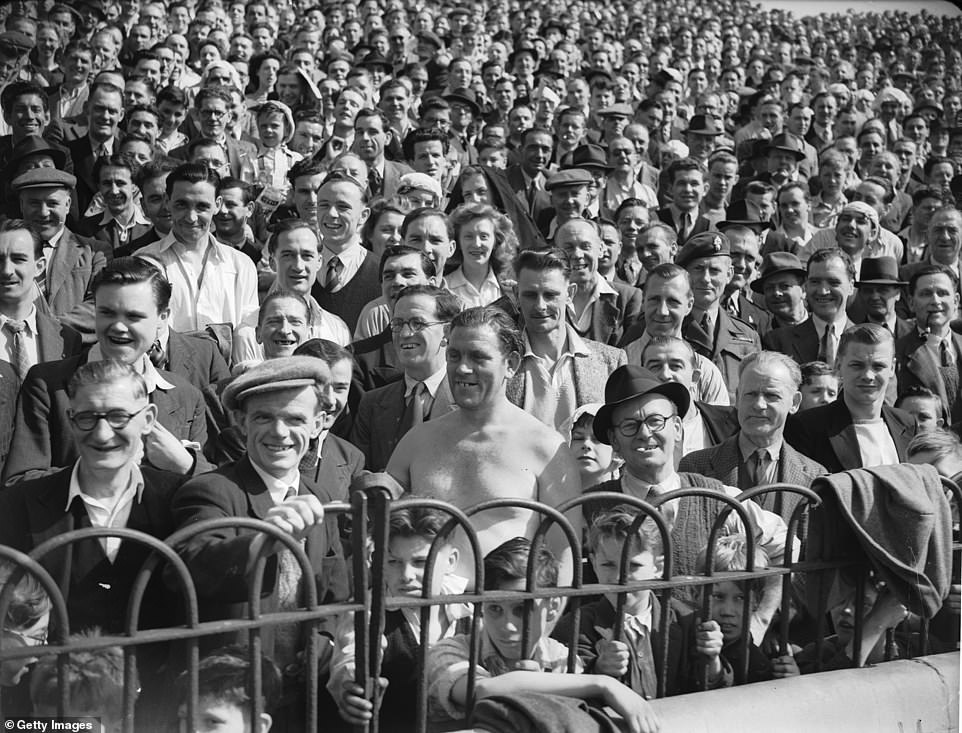 In April 1949, temperatures reached 84.9F (29.4C) in London’s Camden Square and over the next few days we are set to enjoy weather which will be almost as glorious. Pictured: crowds watch a Chelsea versus Derby County football match during the Easter heatwave 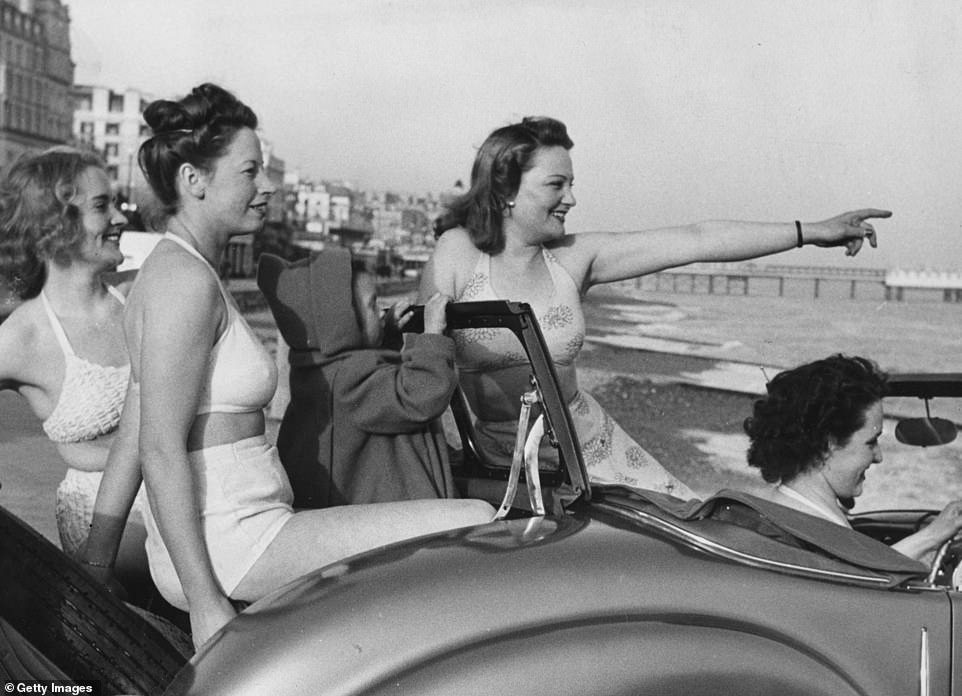 A group of holidaymakers took advantage of the warm Easter weekend in 1949 by driving down to the beach in Eastbourne, Sussex 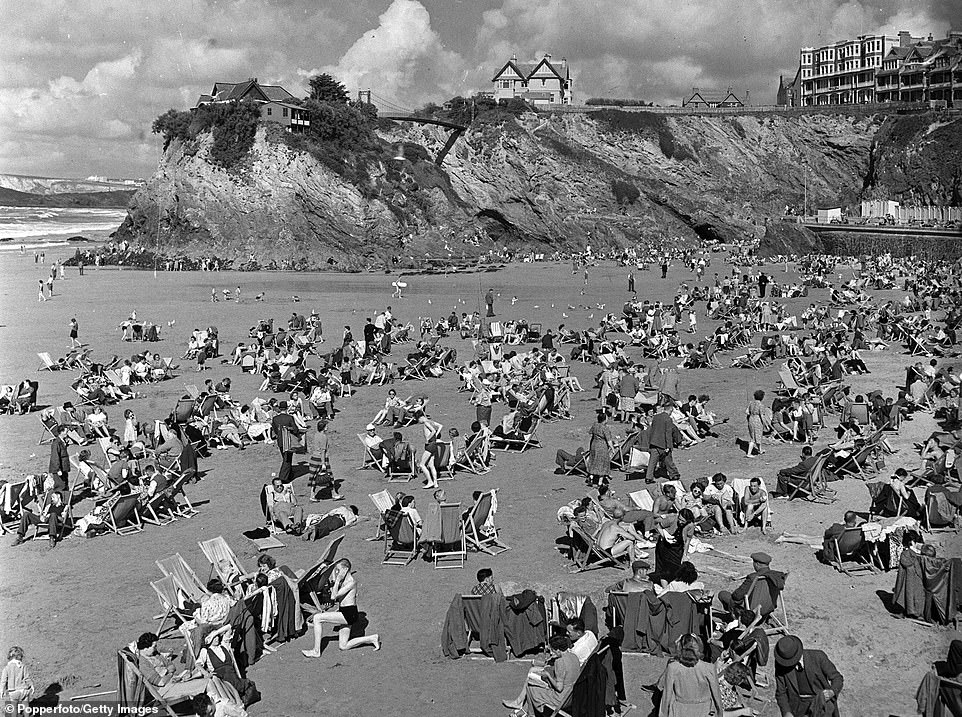 From towns and cities across the country, there was an exodus to the seaside, with Blackpool alone expecting 150,000 visitors, 90,000 arriving on 119 specially time-tabled trains. Pictured: Newquay in Cornwall in 1949 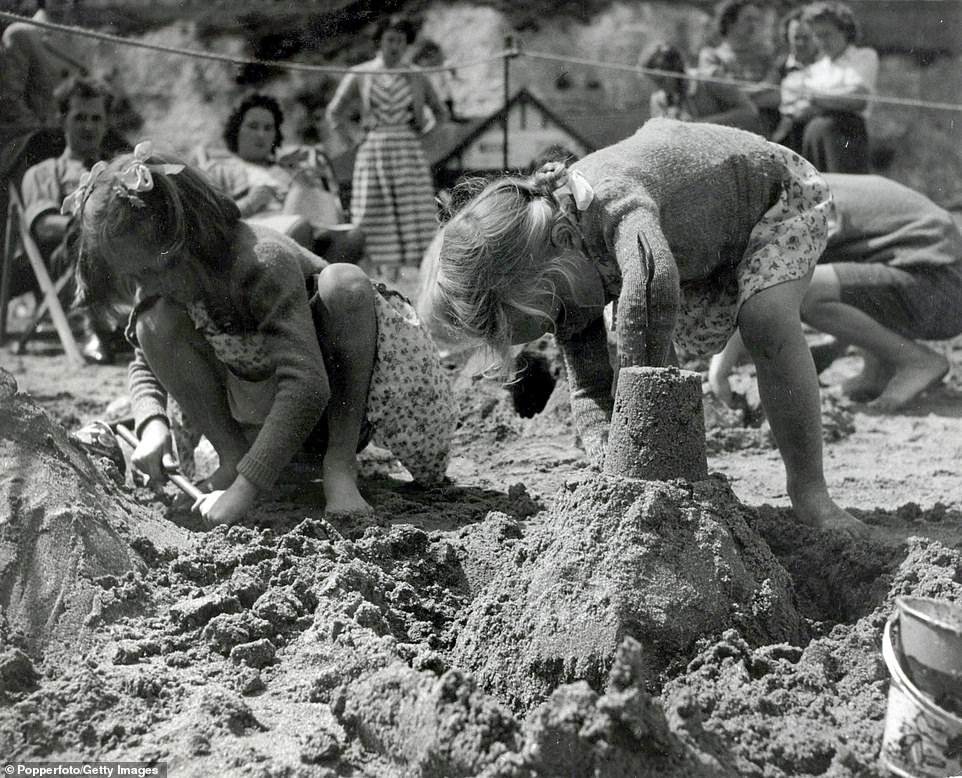 The other 60,000 were expected to travel by bus or car, and although Britain then had only two million motorists — compared to 45 million today — the AA predicted that most of them would be out. Pictured: children making sandcastles on the beach at Broadstairs in Kent in 1949

Shortly before Easter, a 40-seater plane had flown in from Montreal, delivering four tons of bacon and eggs, a gift from the Canadian people to enable 2,500 families in all parts of Britain to have ‘a real non-austerity Easter breakfast’.

But, with confectionery to be rationed until 1953, chocolate Easter eggs were few and far between. There was better news about hot cross buns, said to be more extensively available than in previous years, even if, as one master baker admitted, ‘we cannot guarantee they will be as good as pre-war buns’.

For those wanting to make their own Easter treats, the cookery writer Marguerite Patten offered a recipe for simnel cake covered with ‘mock marzipan’ — an eggless version of the real thing.

For the main course, English lamb was still a rarity, so Sunday lunch for many consisted of mutton or imported beef. But they could at least brighten up their table, as according to the Derby Daily Telegraph, ‘the sunshine sent flower sales soaring and shoppers went home with bunches of spring flowers. Daffodils and narcissi were cheap from 1s. 3d a dozen’.

After a visit to the florist, the thriftier housewife might follow the same newspaper’s advice for ‘brightening up your dress and hair with spring flowers’. ‘Do not overdo it,’ the paper sternly cautioned. 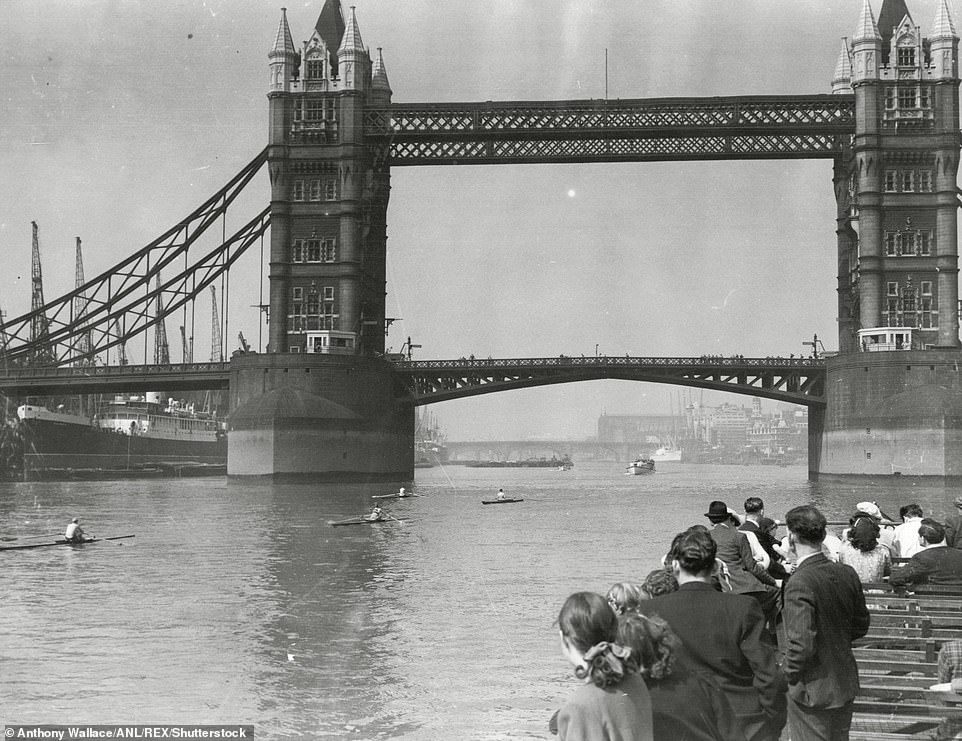 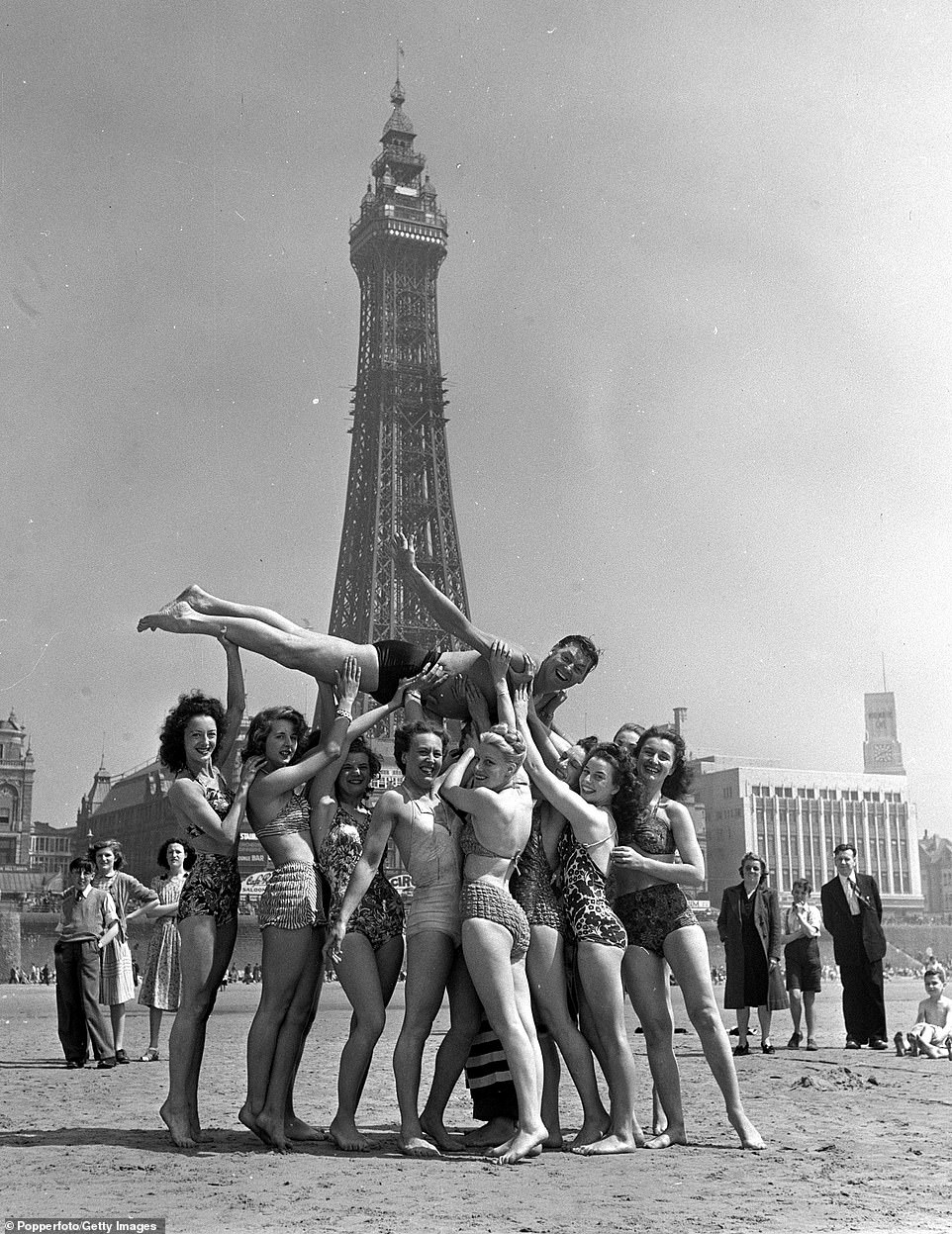 U.S. swimmer and actor Johnnie Weissmuller, most famous for his role as Tarzan, is lifted by a group of showgirls on the beach with Blackpool Tower in the background in 1949

‘Too many will be worse than none at all.’

Wise words, but unnecessary for the showgirls of the Embassy Club in London’s Mayfair, who wore broad-brimmed Edwardian hats and carried lacy parasols as they joined the traditional Easter Parade in Hyde Park, the first to be held since the war.

Thousands of holidaymakers lined the route to see celebrities including comedian Terry Thomas and actress and singer Gracie Fields. She wore an Easter bonnet of straw and flowers, ‘and a real Lancashire smile’ but could not compete with an array of ladies’ hats that ‘mostly offered neither shade from the sun nor shelter from the rain, but were all so very attractive’.

Let’s hope we can all have as much fun as those who smile out at us from those newspaper pages. People who may not have had chocolate eggs or palatable hot cross buns, but till managed to enjoy what was, in the words of the Western Daily Press, was ‘the best Easter holiday in memory’. 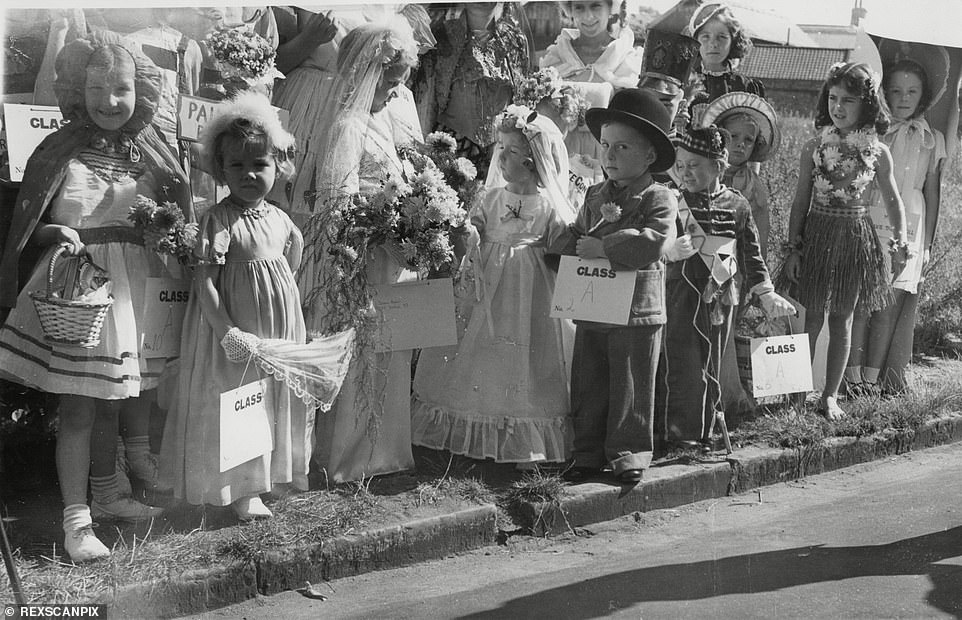