The noise puts Lynden Albiston in a state of perpetual anxiety. Nick Maddock calls it “soul-destroying”. Angela McGuire lives in constant fear the drilling is about to resume.

Mr Albiston has come across neighbours crying in the hallway. His blood pressure is up. Many residents of 1 Studio Walk, part of the Studio 9 precinct in Richmond, complain about disrupted sleep, frayed nerves and a feeling of being trapped inside their own home. 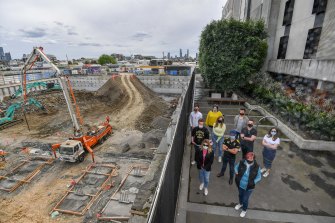 Residents in Richmond have found it nearly impossible to work while construction goes on in the lot next door.Credit:Joe Armao

For six days a week over the course of three months, a project to build apartments has been taking place just metres from their balconies.

The low frequency, guttural moan of a hydraulic rock-piercing drill reverberates and echoes through their apartment complex. At its loudest, it permeates every aspect of their lives.

Historically Melburnians living next door to a noisy construction site might, for the most part, only catch a brief glimpse of intense activity before or after work.

But as working from home has become the norm, people affected by a noise have found their work life profoundly disrupted. Residents at the Kennedy Avenue building are now calling on the builders to dull the drilling, or move them until it’s finished.

But their calls for help have been met with a stalemate, with the construction company, Hamilton Marino Builders, ignoring requests to relocate them and Yarra City Council saying the noise isn’t loud enough to prompt any enforcement action.

Angela McGuire, a human resources consultant, says she finds it almost impossible to concentrate when construction workers are drilling. She works late to catch up then lays awake at night worrying she missed something amid the cacophony that interrupts her day.

“For me, it’s lack of sleep. The stress of the noise, I’m not concentrating on the work I’m doing.”

Nick Maddock, a radiographer, will sometimes get called in to work in the middle of the night to assess people who have been in serious accidents. It makes catching up on sleep the next day impossible. 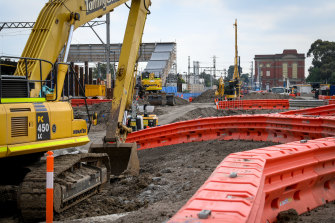 “It is life wrecking,” Mr Maddock says of the noise, “the continuous jack-hammering of rock, often reverberating up and through my unit, is maniacal.”

Government-run construction projects such as the Level Crossing Removal Project, Melbourne Metro Tunnel, West Gate Tunnel Project and even the Kew Recreation Centre have moved people into temporary accommodation after complaints of construction noise. The difference is the works in Richmond do not take place at night.

Under planning law, builders are under an obligation to reduce the risk of harm from their activities as far as reasonably practicable. If they can’t reduce it adequately, the residents say, they should be moved.

There is no specific noise threshold that must be met in order to mandate moving people. It means if a noise assessment is carried out that doesn’t capture the peak noise, it may not prompt enforcement action.

An Environment Protection Authority spokesman said it is not their responsibility to investigate noise complaints, but that they can advise councils on how to apply the law and undertake enforcement.

“You can report noise pollution from a construction site to your local council. For example, noise that starts too early in the morning or late at night or goes on for an excessive time. EPA provides guidance for industry on how to minimise impacts and support to council on request.”

In a statement, Hamilton Marino Builders director Jan-David Storm said the construction firm had consulted the EPA, council and acoustic engineers who say the works are being undertaken with council approval and permits.

“The works are being conducted in accordance with the council-approved working hours and building permits. This is not a 24/7 project,” he said.

He said the builder is also running a community consultation board, agreed to break times for work, and established a shared office space for residents who have essential worker permits.

Yarra council said they continue to monitor the impact of construction in residential areas and are working with the construction site on this matter.

Mr Albiston says he sometimes has to stay up until midnight, or later, to catch up on work he can’t do while the drilling was happening.

There are things the builder could do, he says, like reducing the hours when this type of work is performed, using a chemical cracking agent rather than a drill, building a higher acoustic screening or distributing in-home interventions like noise-cancelling headphones to residents.

In Mr Albiston’s view, though, the noise is too loud for any of these to work.

Feeling like they have no other option, Mr Albiston, a lawyer, says residents are now weighing their chances if they drag the builder to court. But, after three months, residents feel like they’re not up for a fight or the cost of litigation. He worries their situation has fallen through the cracks.

“You’ve done absolutely everything you get the responsible body to engage with this, and they’re doing nothing,” he says, “How can you possibly disregard this?”

Stay across the most crucial developments related to the pandemic with the Coronavirus Update. Sign up for the weekly newsletter.