Washington: Like other Republican governors around the country, Tate Reeves of Mississippi reacted angrily to the coronavirus vaccine mandates President Joe Biden imposed on private businesses. Declaring the move “terrifying,” he wrote on Twitter, “This is still America, and we still believe in freedom from tyrants.”

There is a deep inconsistency in that argument. The state of Mississippi has some of the strictest vaccine mandates in the nation, which have not drawn opposition from most of its elected officials. Not only does it require children to be vaccinated against measles, mumps and seven other diseases to attend school, but it goes a step further than most states by barring parents from claiming “religious, philosophical or conscientious” exemptions. 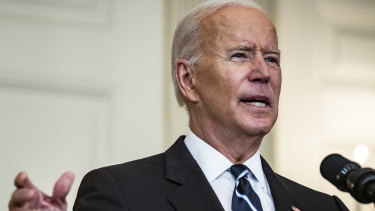 US President Joe Biden ordering all executive branch employees, federal contractors and millions of health-care workers to be vaccinated.Credit:Bloomberg

Resistance to vaccine mandates was once a fringe position in both parties, more the realm of misinformed celebrities than mainstream political thought. But the fury over Biden’s mandates shows how a once-extreme stance has moved to the centre of the Republican Party. The governors’ opposition reflects the anger and fear about the COVID-19 vaccines among constituents now central to their base, while ignoring long-standing policy and legal precedent in favour of similar vaccination requirements.

“Republicans care about getting beyond this pandemic every bit as much as Democrats do,” said Dr. Ashish Jha, dean of the Brown University School of Public Health. But, he added, “politicians are certainly happy to exploit this issue for political gain, which is why I think the Republican governors are up in arms.”

Biden also imposed vaccine mandates on federal workers and many health care workers. But Republican outrage is really boiling over his plan to require all private-sector businesses with more than 100 employees to mandate vaccines or weekly testing for their workforces.

Governor Greg Abbott of Texas called the president’s move “a power grab”. Governor Henry McMaster of South Carolina promised to fight Biden in court, to “the gates of hell”. Governor Greg Gianforte of Montana called it “unlawful and un-American.” Governor Kay Ivey of Alabama called the move “outrageous” and “overreaching”.

But each of these states — indeed, every state in the country — already mandates certain vaccinations for children and sometimes for adults, including health care workers and patients in certain facilities.

Experts in public health law agree that Biden is on solid legal footing because his actions are grounded in federal workplace safety laws. They say Republican governors who insist that vaccine mandates are an intrusion on personal liberty need a refresher on their own state policies.

“That is pure hypocrisy,” Lawrence Gostin, a public health law expert at Georgetown University, said of Reeves’ remarks. “Even religious exemptions are swept away in the state of Mississippi, so how can he say that an order that a president makes to keep workers safe, with authorisation by Congress, is an overreach or in any way unconstitutional?”

A spokesperson for Reeves, Bailey Martin, rejected Gostin’s assertion. “The only people being hypocritical are President Biden and his administration, who for months have said they would not mandate the vaccine,” she said in an email, adding that Reeves would use “every tool at his disposal” to block the mandates.

Republican suspicion of vaccines was building before the pandemic; when Donald Trump was running for president in 2016, he rejected established science by raising the debunked claims that vaccines cause autism. Now some of the governors argue that given the country’s outsize divisions and widespread suspicion of Washington, federal intervention would be counterproductive. It would be best, they say, to let state officials continue making the case that the vaccines are safe and effective and to allow people to make decisions themselves.

“I’m trying to overcome resistance, but the president’s actions in a mandate hardens the resistance,” Arkansas Governor Asa Hutchinson, a Republican, said Sunday on NBC’s Meet the Press. School mandates, he said, “have always come at the state level, never at the national level. And so this is an unprecedented assumption of federal mandate authority that really disrupts and divides the country.”

Jha said Biden had in fact done Republicans a favour.

“What the president does is, he creates political cover for Republican leaders, who will scream loudly because it’s politically expedient,” he said. “But I think many of them are actually feeling relieved, because now they don’t have to do the hard work of convincing their constituents.”

Indeed, when the highly infectious Delta variant began ripping through their communities and overwhelming their hospitals, many elected Republicans — notably, Senator Mitch McConnell, the minority leader — started pleading with people to get vaccinated. Most of the Republican governors criticising Biden have said much the same.

Even as Reeves blasted Biden on Twitter, he took care to declare the vaccine itself “lifesaving.” McMaster held a news conference last month to encourage South Carolinians to take the shots, saying, “Now is a great time to do it while we’re getting ready for the fall.” In Alabama, Ivey has adopted the same stance as Biden: “It’s time to start blaming the unvaccinated folks” for the deadly coronavirus surge, she said recently.

Three-quarters of American adults have had at least one COVID-19 shot, which suggests growing acceptance of the vaccine. Biden’s move is aimed at the roughly 80 million Americans who are eligible but remain unvaccinated. Experts call it an unprecedented exercise of presidential authority to encourage vaccination.

The Supreme Court has twice upheld vaccine mandates, beginning more than a century ago in the 1905 case of Jacobson v Massachusetts, in which Justice John Marshall Harlan reasoned that a “community has the right to protect itself against an epidemic of disease” — in that case, smallpox — “which threatens the safety of its members.”

Both cases upheld state or city mandates and do not apply to Biden’s actions, according to Gostin. Because public health powers are reserved to the states under the Constitution, he said, the Supreme Court would almost certainly strike down a national mandate.

But Biden did not impose a national mandate. He took a series of specific, limited actions that legal experts agree are within his purview as president. The mandates he announced — for the federal workforce and federal contractors, for employees of health care facilities and childhood education programs that accept federal funding, and for large businesses — are grounded in powers that Congress has granted to the president, including the authority to ensure a safe workplace under the law that established the Occupational Safety and Health Administration. 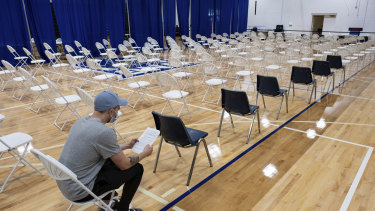 A man sits and waits after getting his first COVID-19 vaccine shot on the last day of the mass vaccination site at the University of North Georgia, Gainesville campus.Credit:AP

And Biden gave businesses an out. Employees who do not want to get vaccinated can undergo weekly testing — a fact that his critics fail to note. Reeves, for instance, asserted that the president had “no authority to require that Americans inject themselves because of their employment at a private business,” without mentioning testing as an option.

Vaccine mandates are not new, nor is resistance to vaccination. As far back as 1721 in Boston, a vaccine opponent threw a small bomb through the window of Cotton Mather, who was promoting inoculation against smallpox during a deadly outbreak. By the early 1900s, smallpox vaccination again emerged as a contentious issue in Massachusetts, giving rise to the Jacobson case.

By the 1920s, many schools in the United States required vaccination against smallpox, according to the History of Vaccines, a project of the College of Physicians of Philadelphia. When vaccines for diseases like pertussis, polio and measles became widely available in the 1940s and ’50s, the American public, inclined to have faith in science and government, voluntarily accepted them, said David Rosner, a Columbia University historian who specialises in the intersection of politics and public health.

The 1960s brought social upheaval and an anti-establishment mood — and with it, the beginnings of the anti-vaccine movement, which led many states to enact mandates, Rosner said. Often, there is pushback, especially with newly developed vaccines.

When the varicella vaccine was developed to combat chickenpox in 1995, for instance, Idaho refused to mandate it. But it was ultimately added to the state’s list of required vaccinations for children born after September 1, 2005.

One Republican governor, Pete Ricketts of Nebraska, drew a distinction between COVID-19 shots and childhood vaccines, insisting in an appearance on Fox News Sunday that childhood vaccine mandates do not violate personal freedoms because parents have had “a long history” with them.

Of COVID-19 shots, he said, “This is a process that’s going to take time to bring people along, and that’s why it should be a personal choice.”

But public health experts say the safety of the community supersedes personal liberty when everyone is at risk from a communicable disease.

But over time, he said, “people get vaccinated, and whatever infectious disease you are trying to deal with fades into the background, and people move on, and that’s what I expect to happen here.”

Still, never before has a vaccine been so caught up in partisan politics. Rosner sees something deeper at work.

“This is part of a much larger dissolution of American society,” he said. “It is part and parcel of the resistance to all forms of social harmony and sense of social purpose that the country is undergoing right now.”