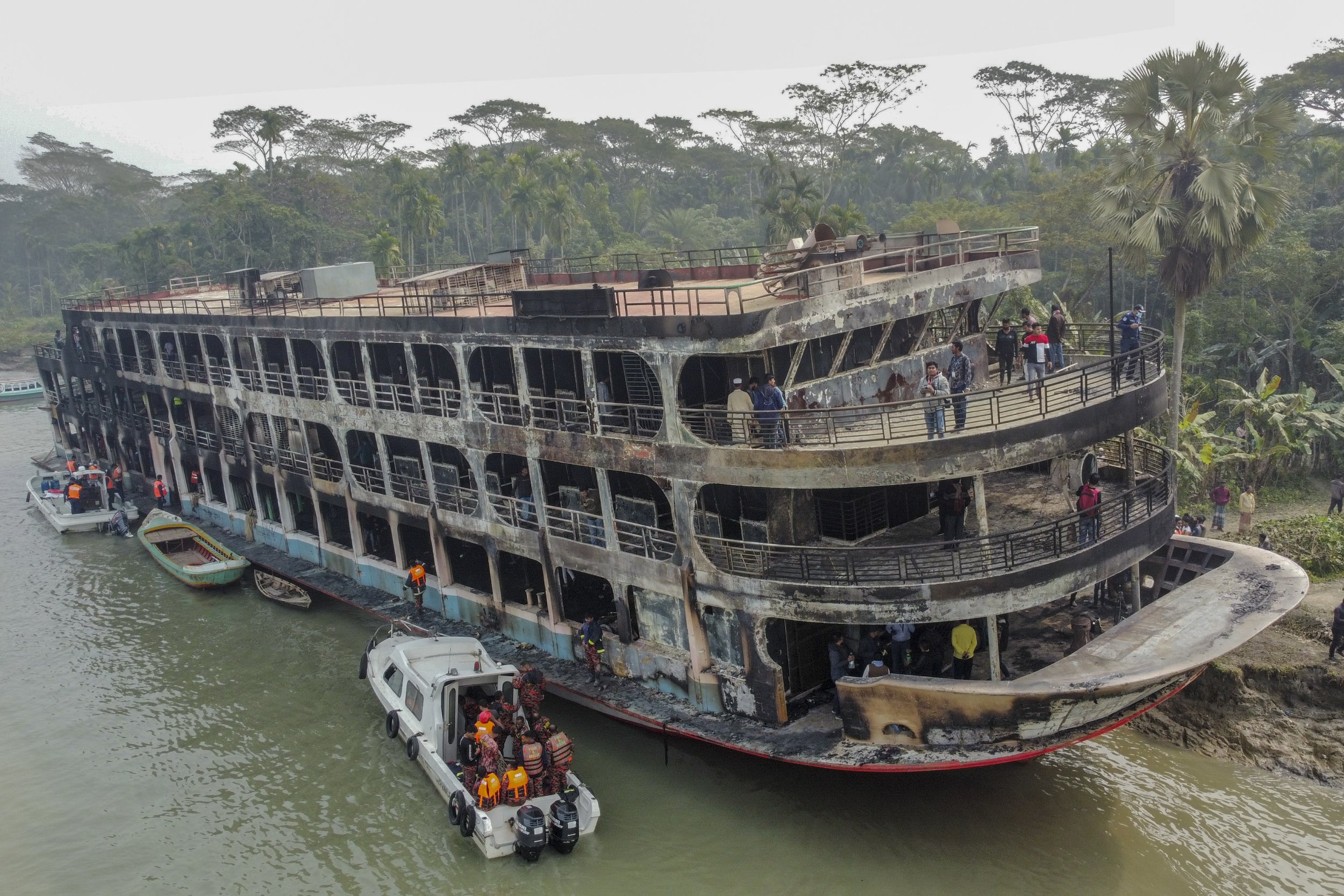 At least 37 people have died when a fire broke out on an overcrowded night ferry in Bangladesh.

The blaze tore through the vessel in the early hours of the morning, with many of those on board jumping into the river to escape the flames.

It happened near Jhalokathi, 160 miles south of the capital Dhaka. The ferry had a capacity of 310 but may have had double the amount of people on board.

Local police chief Moinul Islam said it is believed the fire started in the engine room and ripped through the ferry.

‘We have recovered 37 bodies. The death toll may rise. Most died from the fire and a few by drowning after many people jumped into the river,’ he told AFP.

‘We have sent some 100 people with burn injuries to hospitals in Barisal,’ he said.

Witnesses said the fire broke out at around 3am local time (2100 GMT) and quickly spread.

‘We were sleeping on a mat on the ground floor deck. All the passengers were sleeping. My nine-year-old grandson, Nayeem, was with me, he jumped into the river. I don’t know what happened to him,’ said an elderly grandmother.

Other survivors said they saw a small fire in the engine room as soon as the packed ferry set off from the Sadarghat river station in Dhaka at 9pm on Thursday.

‘A lot of people ran for safety as the fire spread. A lot of people could not get out of their cabins where they were sleeping. Many jumped into the river,’ said another survivor at Barisal Medical College Hospital.

Johar Ali, the local district administrator, said rescuers arrived at the scene within an hour after the fire broke out and rushed the injured to nearby hospitals.

‘We spoke to passengers. And they said there were between 500 and 700 passengers,’ he told AFP.

‘The fire went on for four or five hours before it was doused. The entire [ferry] has been gutted. But they managed to bring it to the shore,’ Ali said.

The coastguard sent small boats and divers to scour the muddy waters for any survivors.

Local television showed images of the charred remains of the boat moored on the riverbank, with burnt motorcycles on board and gutted cabins.

The accident was the latest in a string of similar incidents in the South Asian country which is crisscrossed by rivers.

Poor maintenance, overcrowding and lax safety standards of often blamed for such disasters.

In August at least 21 people were killed when a boat packed with passengers and a sand-laden cargo ship collided. In April and May, 54 were killed in two separate accidents.

In June last year, a ferry sank in Dhaka after it was hit from behind by another ferry, killing at least 32 people. In February 2015, at least 78 people died when an overcrowded ship collided with a cargo vessel.