A couple running a salon and barber in Melbourne's south-east say they have crowd-funded financial backing to fight a $10,000 fine for opening their businesses on Saturday against stage four lockdown rules.

In the second prominent example this week, Adam and Weave Barber and Salon in Hughesdale opened its doors to customers for haircuts on Saturday morning with the owners citing "financial ruin" if they were to remain closed any longer. 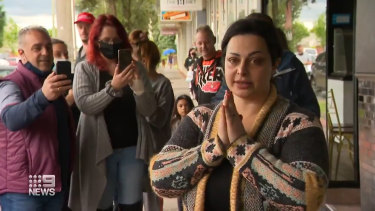 Police were waiting outside Jomana Najem and Rojih Alhallak's business at 8.30am on Saturday morning after Ms Najem spoke about her intention to open her business this weekend in media reports published on Friday.

She told The Age her husband, a recently-arrived immigrant from Syria, made the decision to open after being interviewed by right-wing media site Rebel News earlier in the week.

Ms Najem said at least six customers received a haircut before police threatened her with arrest and issued her a fine for $9913, with the salon closing by 11am.

Police say at least one other person was arrested and fined at the scene, but it is unclear whether that person was a customer.

"Victoria Police understands the difficulties facing many businesses at the moment and made every effort to see today’s matter resolved without the need for a fine to be issued," a Victoria police spokeswoman said.

"However, after repeated warnings and consultation with the Department of Health and Human Services the business owner was issued a fine for $9,913."

Ms Najem said the nearly $10,000 fine was not a major concern to her, stating she had commitment for crowd-funded financial backing for the costs of challenging the fine in court – but would not name which groups or individuals would be paying her fine.

She also said she had been offered legal representation for free, but would not name who from.

The salon owner stated she had no personal relationship with the found of Rebel News, who is running crowd-funding campaigns for a variety of anti-lockdown legal challenges – including a Supreme Court challenge on behalf of an anti-lockdown protester submitted earlier this week.

At least one person who went to the salon on Saturday morning was holding a 'Save Victoria' banner, the slogan for another crowd funding campaign by Rebel News.

Ms Najem said she was operating her salon in a COVID-safe way, but wasn't requiring every customer to wear a mask.

“They could if they wanted to, but I don't think it's my job to tell people what they should and shouldn’t do," she said.

"Nearly everyone was wearing a mask today."

It comes after a defiant Berwick retailer earlier this week vowed to trade indefinitely, despite facing a fine of almost $10,000 after throwing open his menswear store on Wednesday.

Harry Hutchinson said he was fed up with the state government's compulsory lockdown of retail outlets in metropolitan Melbourne and so had made his own decision to reopen his business, Harry's Clothing.

Premier Daniel Andrews said on Saturday he hoped no more businesses would follow in the wake of the Berwick and Hughesdale examples, and urged business owners to be patient.

"This is challenging and yes it’s painful, there’s a lot of hurt and there will need to be healing, and there will be, in a budget that will be unprecedented in the scale and the nature of the investments we’ll make," he said.

Mr Andrews said he felt for business owners who said they “had to open” because they were out of money, but they should “ring (the state government assistance lines) and we’ll look after you if we can”.

“But if you’re wanting to fill your till by opening up against the rules, you’re going to get a $10,000 fine. The maths of that doesn’t add up,” Mr Andrews said.

But Ms Najem said her business, which only opened three-and-a-half weeks before stage four lockdown began, didn't qualify for any business assistance and she felt that without a clear date for retail re-opening from the government, and mounting rent and invoices, she had no other choice but to open up.

“If there was a date, we wouldn’t have done what we did," she said. “We have no hope, we see no silver lining".

She said the family had been overwhelmed with support for re-opening, with people dropping off food, money and presents for her children on Saturday.

"We were inundated and we told people to come and we would do walk-in appointment for cuts," Ms Najem said. "The amount of support has been insane."

The couple, who have two young children, said they would decide tonight whether they would open again tomorrow and risk further fines or charges from police.

“We need to weigh up the scales," said Ms Najem.

The Victoria Police spokeswoman said the force "would like to commend the vast majority of Victorians who continue to adhere to restrictions".