Two Hungarian men who trafficked women into the UK to exploit them as prostitutes could have escaped justice because their victims were earning so much money they would not co-operate with cops.

Geza Horvath and Daniel Zemencsik’s brothels made a profit of more than £175,000 in the 12 months they operated their seedy business.

But it all came crashing down when a punter who paid for sex with one of the girls rang police to expose the ‘squalid’ conditions the girls were being kept.

That call set the wheels in motion an investigation that uncovered a large sex-trafficking ring in Derby. 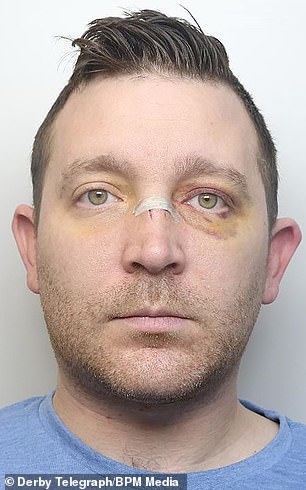 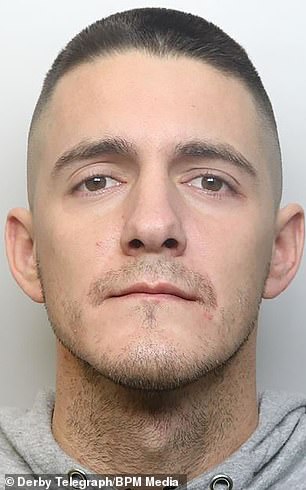 Geza Horvath, 33, left, trafficked the women into the UK while Daniel Zemencsik, 28, right, ran the brothels ‘day to day’ and drove the women to punters

When officers carried out coordinated raids on three properties, they discovered 20 girls had been flown into work in the sex trade with ‘the promise of a better life in the UK’.

Now the two men have been jailed for a total of eight years and two months after earlier pleading guilty to human trafficking offences.

They claimed in Hungary such a business operation is legal and taxed and they did not realise how serious employing women as sex workers are viewed in this country.

She said Horvath, a former University of Derby student, rented the properties and advertised on a Hungarian website for prostitutes to come and work in the city.

Miss Silver said Zemencsik would collect women from airports including East Midlands, Birmingham and Luton and they would be set up as sex workers in the properties. 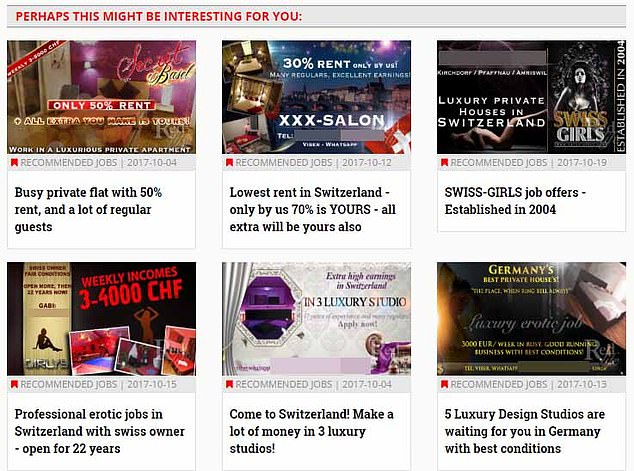 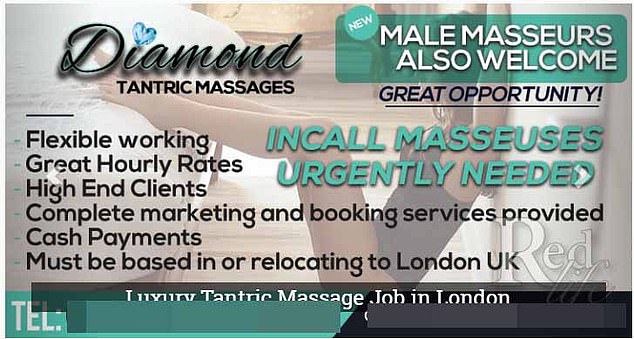 She said: ‘The turnover of women was high and some complained of the squalid conditions, with the hot water or heating sometimes not working.

One woman who worked at a flat in the city described it as ‘unkempt and stinky.’

Miss Silver said after police became aware of the operation, the properties were watched and around 20 girls are believed to have passed through the properties during the year the business ran.

As well as a house and flat a third address in Burton-on-Trent, Staffs, was being used as an office where Horvath and his co-conspirator Zemencsik spent £15,000 advertising the girls online.

She said the estimated profit made by the two men and their co-conspirators was £175,000.

Horvath and Zemencsik both pleaded guilty to conspiracy to facilitate the travel of others with a view to exploitation. 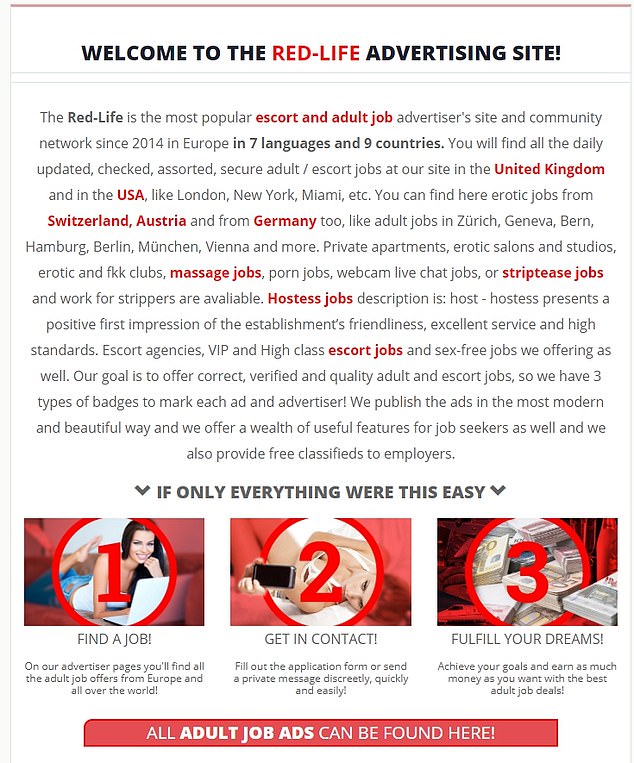 The Red Life website homepage offered this pitch to its users. The pair’s barrister pointed out there was no deception on their part and the women were not coerced

Philip Tulley, for Horvath, said his client came to the UK from Hungary in 2005 and had been educated here.

He said he studied at the University of Derby and had worked in both the automotive industry and as an IT programmer.

Mr Tulley said: ‘Although the women were trafficked here to work in the sex industry they did so in the full knowledge of what they were doing.

Roger Wilson, for Zemencsik, who has no previous convictions, said his client had arrived in the UK from Hungary in 2012 hoping for a better life.

He said: ‘Where he is from in Hungary operations like this are legal and taxed and he did not realise how serious this type of offence is viewed in this country.

‘He has used his time in custody well and has volunteered for the early deportation scheme which will see him sent back to Hungary when he is released. He has no intention of returning to the UK.’

Jailing Horvath, 33, of Burton-on-Trent, Staffordshire for five years and Zemencsik, 28, of Derby, for three years and two months, Judge Jonathan Bennett said: ‘It was a conspiracy and each person played their role over a period of time.

‘You, Mr Horvath, played a senior role, overseeing the operation, running the office, renting the properties and advertising the girls.

‘You, Mr Zemencsik had an essential role transporting the women and looking after the day-to-day operation and maintenance of the properties.

‘The condition (of the properties) was so bad, described as so ‘squalid’ that the women did not stay long and the turnover was high.’

More than 900 adverts to work in the sex trade in the UK, like this one for prostitutes in Manchester, were listed on the site which was aimed at Eastern European women

After the hearing, Derbyshire Police said one of the problems securing convictions was the lack of co-operation from the girls, who were earning more working at the brothels than they would in their home country.

Detective Inspector Andrea Parkin said: ‘It would have been great if these girls had come forward themselves but they simply did not want to engage with us.

‘Instead our investigation began when we received a call from a man who was visiting one of the girls who told us how concerned he was about her.’

DI Parkin said at the early stage of the investigation it became clear that Horvath was advertising for sex workers on a Hungarian website called Red Life.

In the adverts he promised girls a better life in the UK and invited them to come from Hungary, where prostitution is legal, with the promise of better earnings.

She said: ‘Between May 2017 and April 2018 around twenty girls came to Derby where Horvath set them up in brothels he created. Zemencsik was his number two, he would act as the runner. 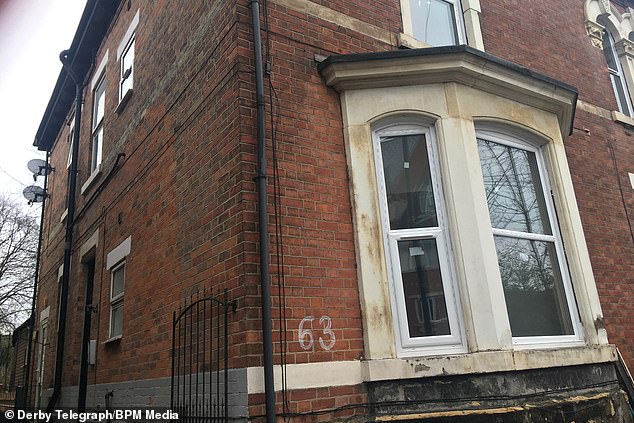 ‘He would be the one to arrange their flights, collect them from the airports and bring them here.

‘Once they were set up he would visit them every day to check on them.

‘He would leave envelopes into which each of the girls would put half their money and once every two-to-three days he would go and collect them up.’

DI Parkin was assisted by former police superintendent Andy Stokes, now working as an investigative support manager for the force.

He said computers were seized and analysed and it was discovered that the two brothels were being advertised online on UK websites.

Mr Stokes said: ‘They spent £15,000 on advertising which goes to show the scale of the operation.

‘When we carried out the warrants at the three addresses, we found all of the paraphernalia you would expect to find at a brothel.

‘We found out that the girls were being charged a daily rate by Horvath and Zemencsik, who were also taking half of the money.

‘The estimated profit figure we can put on the pair of £175,000, but that figure is possibly higher than that.

‘This was an organised crime group, there is no doubt of that, it had a high turnover of girls with a constant flow of customers.’

DI Parkin said detectives here in the UK worked with their counterparts in Hungary and investigations are still ongoing in that country into further possible suspects.

She said: ‘It is abundantly clear that these two men were not looking after the interests of the girls.

‘They were simply looking to make money through illegal means and we are pleased to see them brought to justice.

‘We hope that this sentencing will help stem the flow of girls being trafficked to Derbyshire from other countries and sends out a strong message that people trying to bring this type of criminality to our streets will be dealt with in the most severe way.

‘We would also like to say that there are avenues open for women being trafficked where they can talk to us about what is happening to them.’