Australian volunteer literacy teacher Tom Delaney isn’t fazed by the Morrison government’s ban on travel from India. He’s more worried about how his neighbours in an Indian slum will survive.

Delaney, 24, lives in a shanty community in Lucknow, the capital of the densely populated northern state of Uttar Pradesh. He teaches children how to read and write and helps locals gain access to healthcare and other services. 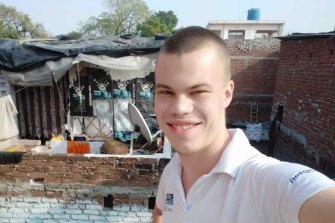 Tom Delaney on the roof terrace of his home in Lucknow, India.

Delaney has tested positive for COVID-19 twice – first in August and then again last month – although his symptoms were mild.

“I’m not concerned for my safety or wellbeing – I’m perfectly fine,” he says. “But I’m definitely very concerned about my neighbours.”

India is grappling with a surge in COVID-19 infection. Last week it became the first country to register 400,000 new cases in a day and health services have been pushed to breaking point.

In some cities lifesaving oxygen supplies are running low and cremation grounds have been overflowing. 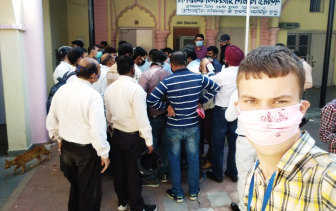 Tom Delaney outside a government office in Lucknow, India, in April 2020

The Morrison government has temporarily banned all travellers from India entering Australia including citizens who face big fines and even jail if they attempt to return home.

Delaney, whose family is from Brisbane, had not even heard about the controversial decision until he was contacted by The Sydney Morning Herald and The Age.

“I don’t feel stuck or stranded,” he says.

Although Delaney thinks banning all travel from India to Australia is “maybe an overreaction”.

The turmoil of India’s latest coronavirus wave is taking a huge economic toll.

Delaney’s neighbours, many of whom are daily labourers or self-employed vendors on very low incomes, have been hit especially hard.

“People are scrounging by on very little,” he says. “It is incredible how people have survived.”

Delaney has chosen to live in a slum neighbourhood where he shares a single room house with a friend. It has no fridge, no washing machine and water is carted from a tap on a level below. Meals are eaten sitting on the floor.

During last year’s lockdowns Delaney obtained a permit to move around the city in order to dispense aid. Since, he and his friends have organised several food distributions. 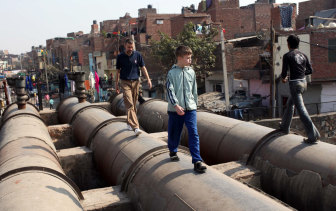 Tom Delaney with his father Mark near their Delhi home in 2009.Credit:Brendan Esposito

Tom Delaney is especially concerned about the pandemic’s effects on the education of school-age children in India, especially those from poor backgrounds.

“Most kids in the slum here have had virtually no formal education for much of the past year,” he says.

“That’s because government schools have not had the resources to transition well to digital learning away from the classroom. Even to the extent that they have, most kids in the slum can’t access the technology needed.”