Have you ever heard of padel? The international federation for this sport claims it has 18 million players, but it’s little known in Australia.

Dusty Allen, 38, of Richmond, a longtime casual tennis player, tried it out of curiosity six weeks ago.

“I got a little bit addicted,” he confessed. 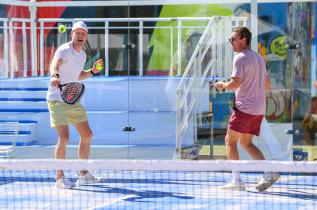 Mr Allen said padel was appealing socially . It’s usually played in doubles, and its smaller courts mean players are closer to their opponents than in tennis.

His friends, some of whom aren’t tennis players, like that players serve underarm.

“Padel is a lot easier than normal tennis and probably more accessible,” he said. “I’ve noticed that some different mates who I don’t normally play tennis with come down for a hit.”

This sometimes fast-paced sport, which incorporates elements of squash and tennis, involves slightly lower-compression balls being whacked with a solid paddle, instead of a stringed racquet.

British tennis star Andy Murray is among fans of the sport, and last year in Florida soccer legend David Beckham was videoed having a hit.

Now Tennis Australia has also taken on the game, aiming to build its profile locally.

A pop-up court has been built at Melbourne Park so the public can try the sport and watch exhibition games during the Australian Open. Other “come and try” sports at the Open include beach tennis and POP tennis. 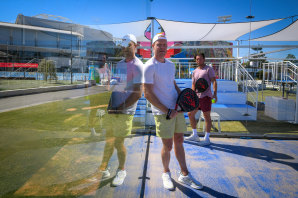 Pronounced “pa-DEL”, the sport has existed for more than 50 years.

Founded in Mexico in 1969, it’s popular in South America and in parts of Europe, including Spain and Sweden.

Spanish tennis star Rafael Nadal’s academy in Mallorca has 13 padel courts, according to its website. 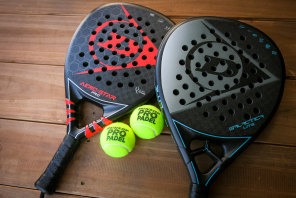 Mr Thomas, who will play in this month’s exhibition games, said among differences from tennis were that some walls were glass, that you could hit the ball off them, similar to squash.

He opened a padel club in Birmingham, in his native UK, then moved to Australia, opening the country’s first club in Sydney in 2015. There are now six clubs in Australia.

Tennis Australia has taken over national governance of padel.

Callum Beale, Tennis Australia’s head of game development partnerships, hopes that within three years, an international tournament will be played at Melbourne Park.

Mr Beale started playing padel five years ago in Sydney, which he found social but competitive. “I’ve been hooked ever since,” he said.

He said newcomers could “pick up the sport very quickly”.