Authorities have released the probable cause affidavit ahead of the 28-year-old hearing in Moscow, Idaho, later today.

It reveals how Kohberger turned his phone off on the night of the murders in an attempt to cover his tracks before the murders – turning it off before getting too close to the property.

Twisted Kohberger even returned to the scene of the crime at 9am on November 13 – just hours after he allegedly committed the quadruple murders. 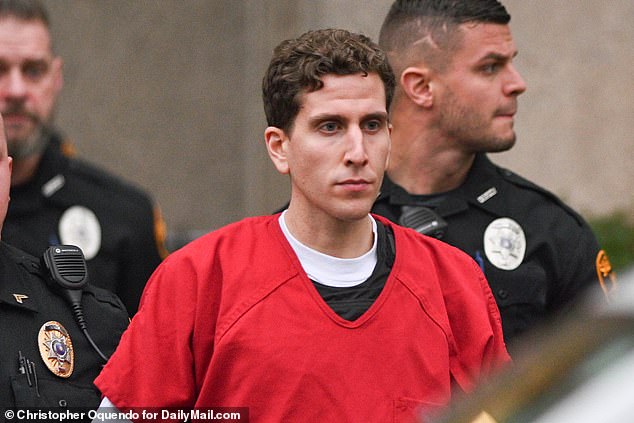 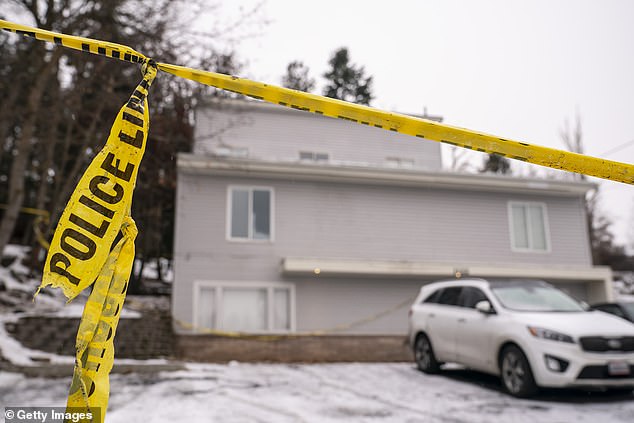 The documents say that the criminal justice graduate stalked the property in the late evening and early morning on each occasion – bar one.

Officials have not revealed the exact dates that he canvassed the three-story property but confirmed that in August, he was pulled over just two minutes after leaving the area covered by the cell phone tower closest to the home.

A Latah County Sheriff’s deputy pulled him over on August 21 at 11.37pm as part of a traffic stop – in which he provided his number.

During the stop, which was recorded on the officer’s body cam, Kohberger was driving his white Hyundai Elantra.

Documents show that officers believe Kohberger stalked the victims, staking out the house at least twelve times before the killings 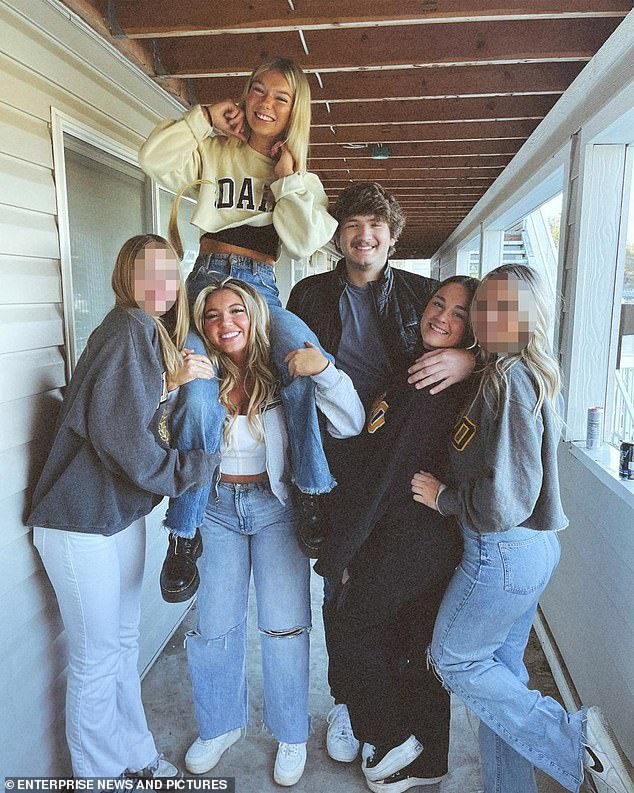 Officials have not revealed the exact dates that he canvassed the three-story property but confirmed that in August, he was pulled over just two minutes after leaving the area covered by the cell phone tower closest to the home 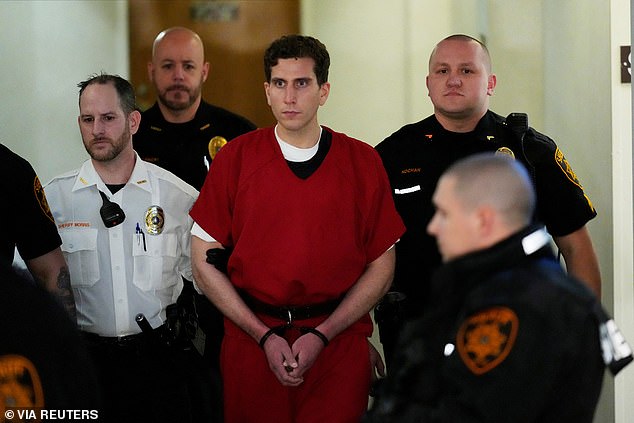 On the night of the murders, Kohberger’s phone pinged a cell tower close to his apartment in Pullman, Washington

Because of the series of traffic stops, officers were able to link both the car and the phone number to Kohberger – and look up each time his device pinged the tower closest to the property.

On the night of the murders, Kohberger’s phone pinged a cell tower close to his apartment in Pullman, Washington.

It then is seen leaving the area of his residence at 2:47am and traveling south through Pullman – which cops have confirmed lines up with the movements of his white Hyundai caught on camera.

His phone then stops reporting to the network, with FBI experts confirming that it is consistent with the phone being turned off, on airplane mode or in an area without phone coverage.

Court documents show that his phone is not active again until 4.48am, in the southbound lane of Highway 95 just south of Moscow.

Kohberger then travels towards Genesse, Uniontown and eventually back to Pullman between 4:50am and 5:26am.

The cell phone data then pings when he returns to his property, which is again caught on camera when the Elantra drives north on Stadium Drive at 5.27am.

His phone then left his apartment again at 9am and traveled towards Moscow, back towards the King Road residence and arrived between 9.12am and 9.21am. 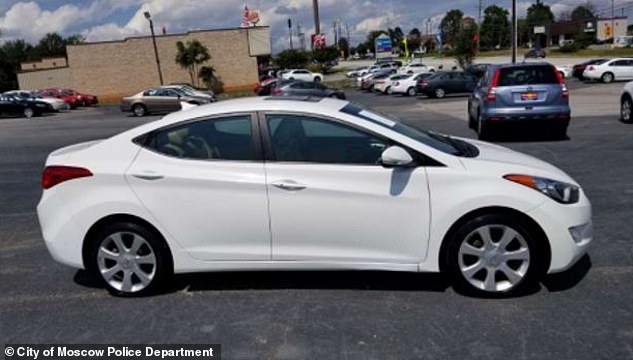 Police were on the hunt for Kohberger’s white Hyundai Elantra, which officials began tracking in November after identifying that it was in the area of the killings 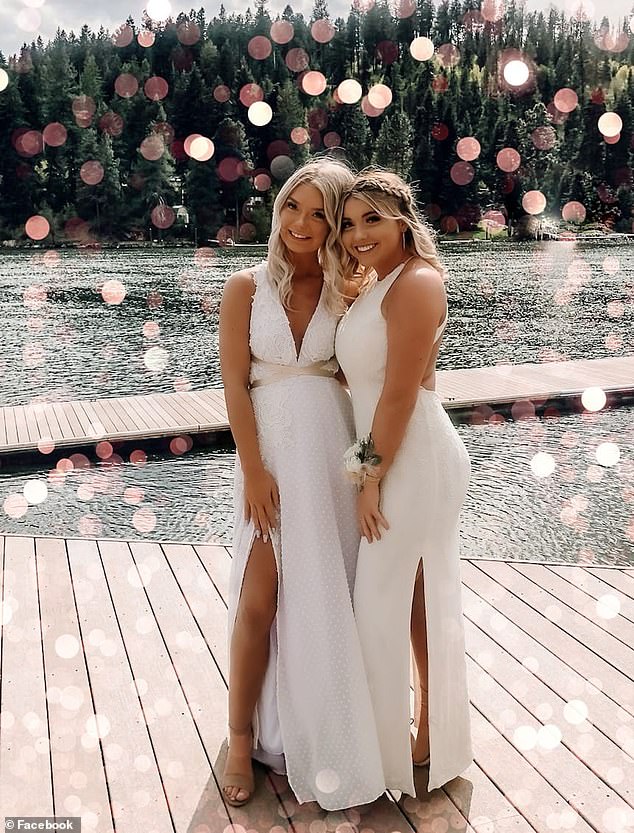 Kohberger then returned home to his apartment in Pullman at 9.32am, with further analysis showing that Kohberger stopped to have a coffee at 12.36pm after the murders.

He then went grocery shopping in Washington at 12.46pm, leaving at Albertson’s grocery store at 1:04pm.

The suspected killer was in the Johnson Idaho, between 5.32pm and 5.36pm – before appearing to be turned off again until 8.30pm.

His phone has remained off or not connected to the network since November 14.

The affidavit, written by peace officer Brett Payne, adds: ‘Based on my training, experience and facts of the investigation thus far, I believe that Kohberger was likely the driver of the white Elantra that is observed departing Pullman, WA and that this vehicle is likely Suspect vehicle 1.

‘Additionally, the route of travel of the phone during the early morning hours of November 13 and the lack of phone reporting to the tower between 2.47am and 4.48am is consistent with Kohberger attempting to conceal his location during the quadruple homicide that occurred at the King Road Residences.’

Kohberger was picked up by a cellphone tower near the property at least 11 more times before the murders on November 13. Cops have yet to share further details of those subsequent visits.

4:00-4:20am: Maddie Mogen, Kaylee Goncalves, Xana Kernodle and Ethan Chapin were all knifed to death at 1122 King Road, Moscow.

4:50am-5:26am: Phone pings show it traveling south on ID95 to Genessee, Idaho, them west towards Uniontown, Idaho, and back north into Pullman, Washington.

November 13, 9:00am: Kohberger’s phone is on the move again, and travels back to the vicinity of the King Road murder house. It is picked up by a nearby cellphone tower between 9:12am and 9:21am.

9:32am: Kohberger’s phone indicates that he’s arrived back home in Pullman again.