Impact of continued lockdown on poor people’s health will be balanced against the risks from allowing people out when it comes to finalising an exit strategy, Chris Whitty says

The impact of the lockdown on poor people’s health will be balanced against the risks from allowing people out when it comes to finalising an exit strategy, the chief medical officer has revealed.

Professor Chris Whitty said on Monday the government was weighing the impacts of its social distancing rules on mental illness and finances, with the more direct health implications.

Dominic Raab, the foreign secretary who is serving in Boris Johnson’s stead, has tried to avoid talk of the next phase, saying it risks distracting so ‘we won’t get through the peak as fast as we need to.’ He and other ministers have said the priority for now is to limit the spread.

But Prof. Whitty said that while it was not yet possible to ‘call the point’ at which the UK could move forward from the lockdown, there had to be planning after we reach the peak, which has been tentatively forecast for the end of this week. 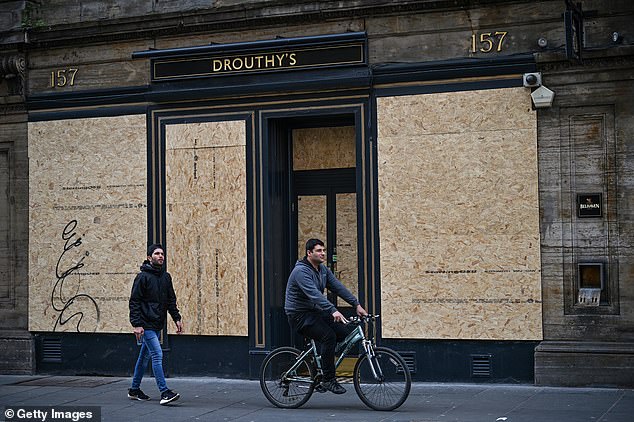 Prof. Whitty said that while it was not yet possible to ‘call the point’ at which the UK could move forward from the lockdown, there had to be planning after we reach the peak, which has been tentatively forecast for the end of this week.

Prof. Whitty said: ‘We’ve got to remember, just from the health point of view and clearly there are wider social and economic issues as well, that there are at least four different kinds of mortality and ill health we need to take into account over the period of this epidemic.

‘There’s the direct effects of people dying from coronavirus, there’s the indirect effects of the NHS, if it were to become overwhelmed and therefore unable to provide emergency care for either coronavirus or other areas, and all the activities we’re doing at the moment are to make sure that both of those are minimised.

‘But it is really important also to remember that there will be effects from the fact that some healthcare has had to be postponed to make room for this within the NHS and of course anything that has an impact on the socio-economic status, particularly of people who are more deprived, will have a long-term health impact as well and we have to, in our exit strategy, balance all of these different elements which to some extent can be in tension.’

Earlier Robert Jenrick, the communities secretary, said Downing Street was looking to ‘consider when the time is right … how one might start to ease those [lockdown] measures in a way which works in terms of public health and which works for the economy.’ 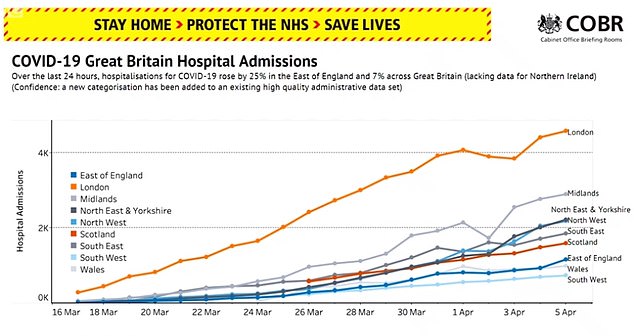 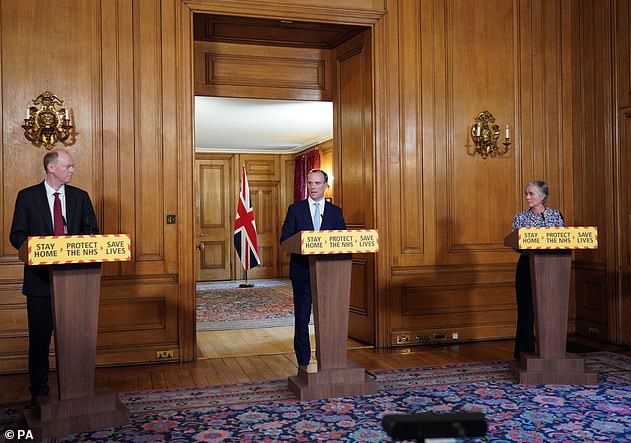 Addressing the public this afternoon after completing his own coronavirus self-isolation, Prof Whitty, an epidemiologist, said: ‘At this point in time we would expect quite a small proportion of the population has probably got antibodies

Indeed, it was reported over the weekend that Health Secretary Matt Hancock and Chancellor Rishi Sunak were at war over the devastating economic effects of the lockdown.

Mr Sunak has made ‘robust’ arguments to his colleague that a path to normality had to be mapped to avoid irreparable damage to the nation.

Critics of Mr Hancock told the Mail on Sunday that his ‘careerist’ fear of being held responsible for the NHS was blinding him to the imperative.

However, with another 439 deaths recorded on Monday, the end of the lockdown does not yet appear to be on the horizon.