US Secretary of State Mike Pompeo has heaped praise on Indonesia for taking "decisive action to safeguard its maritime sovereignty" over the Natuna Islands, while criticising China's for its "unlawful" claims in the South China Sea.

Speaking alongside Indonesian Foreign Minister Retno Marsudi, and after meeting President Joko Widodo, Pompeo also talked up the prospect of greater economic ties between the two nations, a closer defence relationship and the $US11 million in COVID-19 assistance Washington has sent Jakarta. 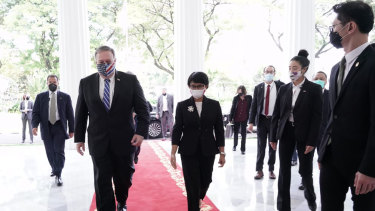 Walk this way: US Secretary of State Mike Pompeo with Indonesia’s Foreign Minister Retno Marsudi in Jakarta on Thursday.Credit:Indonesian government

"We spent time, after talking about the economy, on security. All law-abiding nations reject the unlawful claims made by the Chinese Communist Party in the South China Sea, as it's clear from Indonesia's courageous leadership on the subject within ASEAN and at the United Nations. It's a cause worth pursuing in multilateral settings and the Trump administration very much supports this," he said.

"We also welcome the example Indonesia set with decisive action to safeguard its maritime sovereignty around the Natuna Islands. I'm looking forward to cooperating together in new ways to ensure maritime security and protect some of the world's busiest trade routes."

Retno, for her part, stressed Indonesia's desire for an Indo-Pacific that is open, inclusive, transparent and rules-based. 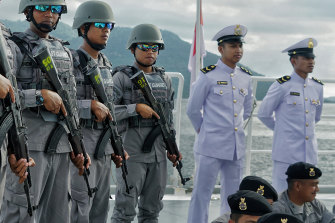 This statement is similar to ones made by the foreign minister many times before and gives no indication that Indonesia is likely to disengage from its deep trade and investment relationship with China.

"I encouraged US businesses to invest more in Indonesia, including for projects in the outer islands of Indonesia, such as Natuna Island," she said. The call to invest in Natuna is not new but is significant because of the island's strategic importance.

China does not include the Natuna Islands as part of its claim to more than 90 per cent of the South China Sea – a claim disputed by Vietnam, the Philippines, Malaysia, Brunei and Taiwan – but it does claim part of what Indonesia calls the North Natuna Sea. 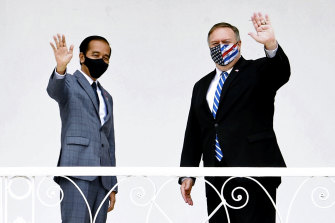 Indonesian President Joko Widodo, left, and US Secretary of State Mike Pompeo wave at the Presidential Palace in Bogor, West Java, on Thursday.Credit:Palace/AP

In December and January Indonesian naval and coast guard vessels faced off against Chinese ships which had encroached on the territorial waters.

In an opinion piece in the Jakarta Post on Wednesday, China’s ambassador to Indonesia Qiao Xian stressed the close ties and "true friendship" between the two countries, China's position as Indonesia's top trade partner and – most significantly – the joint work they are doing on a COVID-19 vaccine, which will "make Indonesia among the first countries to gain access to [a] vaccine".

Pompeo has added Vietnam to the end of his swing through south and south-east Asia, which comes on the eve of the US election.

He is due to speak to Ansor, the youth wing of the country's Nahdlatul Ulama organisation, a moderate Muslim movement which claims 90 million members, on Thursday evening about the importance of religious freedom and plurality.

Indonesia is a secular majority-Muslim nation but has sizeable Christian, Buddhist and Hindu minorities.

Yenny Wahid, the director of the Wahid Institute and senior member of the organisation's women's wing, said the visit was strategically important but cautioned against reading too much into it.

Wahid is the daughter of the deceased religious leader Abdurrahman Wahid (commonly known as Gus Dur), who Indonesia's president from 1999 to 2001.

"Of course we are honoured that Secretary Pompeo decided to visit Indonesia and address our organisation. I hope that this will create more understanding between the Islamic community and President Trump's administration.

"Some people read this visit as a way to counter the China’s growing influence in Indonesia’s NU community. We remain committed to having to open relationships with both the US and China and to foster understanding with all nations," she said.