A teenage boy was pulled from a massive 10ft deep avalanche which killed his parents and younger sister when it buried accommodation in a Arctic ski resort.

Six more people were feared buried beneath the deep snow in temperatures of -13F (-25C) in Norilsk, Russia.

The tourists were sleeping in small houses when the avalanche struck blanketing an area of 6,500 square feet at the winter sports base. 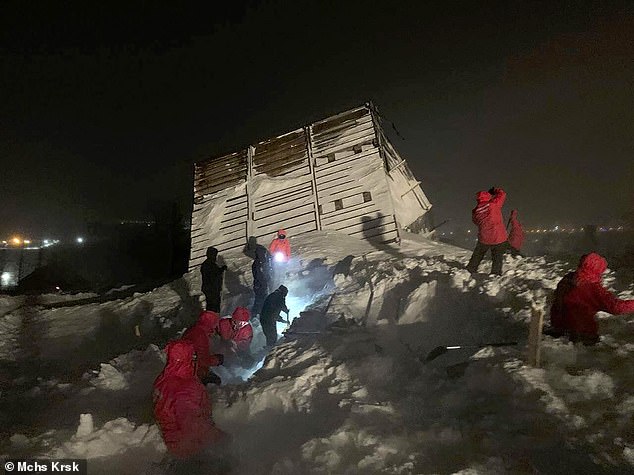 A 14-year-old boy survived a giant avalanche in Norilisk, northern Russia today after the snow slide blanketed 6,500 square feet of a ski resort 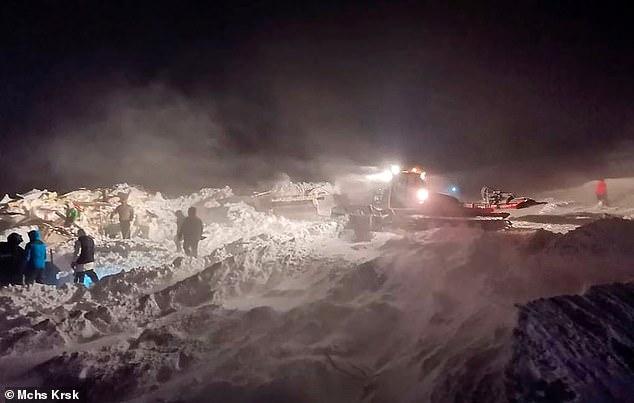 The schoolboy, named Makar Popov, is said to be badly frostbitten and to have sustained multiple fractures 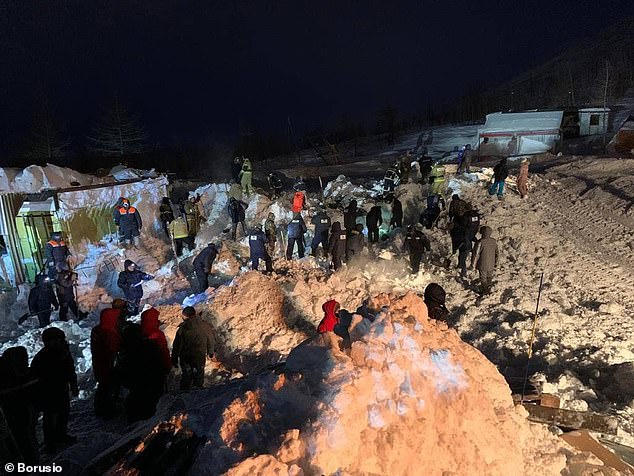 Medics were today working to save his life and he was described as being in a grave condition in hospital in Norilsk.

A video shows the moment Makaer was miraculously found alive, buried under the avalanche, caused when a mountaintop snow cap crashed down in an area deemed to be safe from snow slides at Gora Otdelnaya resort.

His 38-year-old mother – not yet named – was pulled dead from the carnage.

As searches continued in darkness and blizzard conditions, the body of his father Vlad Popov, 45, was found along with his 18-month-old brother. 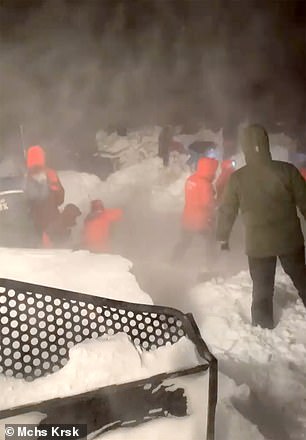 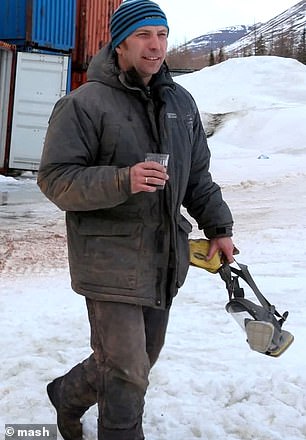 The body of the boy’s father, Vlad Popov, 45, (right) was discovered as people searched the area. Pictured left: People help in the search for missing people 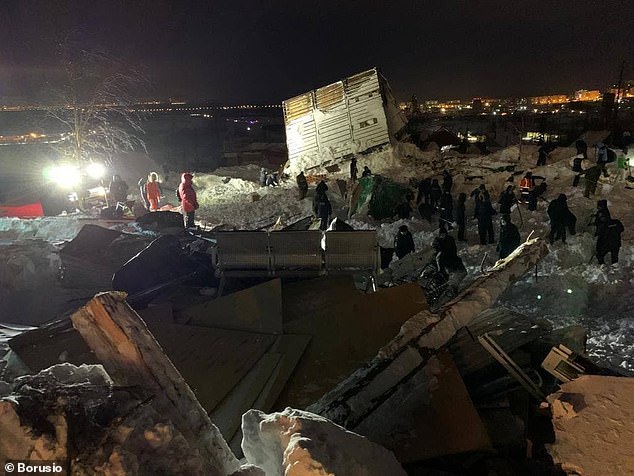 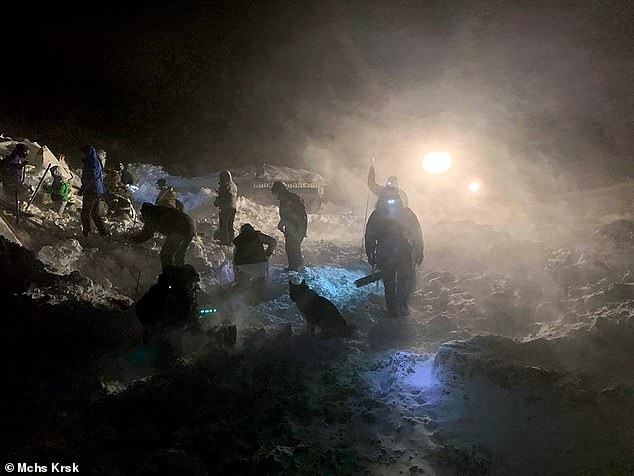 Young Makar’s 38-year-old mother, who has not yet named, was also pulled dead from the carnage

Ski resort boss Igor Shatalov said he feared half a dozen more tourists were buried by the avalanche.

This was not immediately confirmed by the Russian authorities, which said the searches had finished.

Rescuers had worked amid fears of a new deadly snow slide.

An emergency source said: ‘The threat of a repeated avalanche collapse currently exists. All security measures are being taken.’

Volunteer rescuer Maksim Innikhov said: ‘We found parts of the houses where the family of four …were staying for a holiday.’ 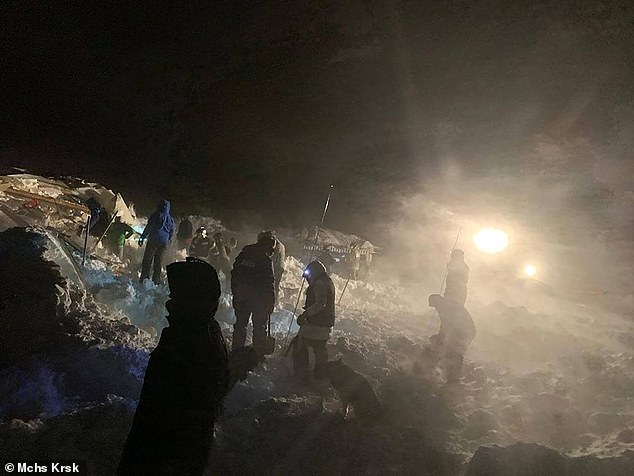 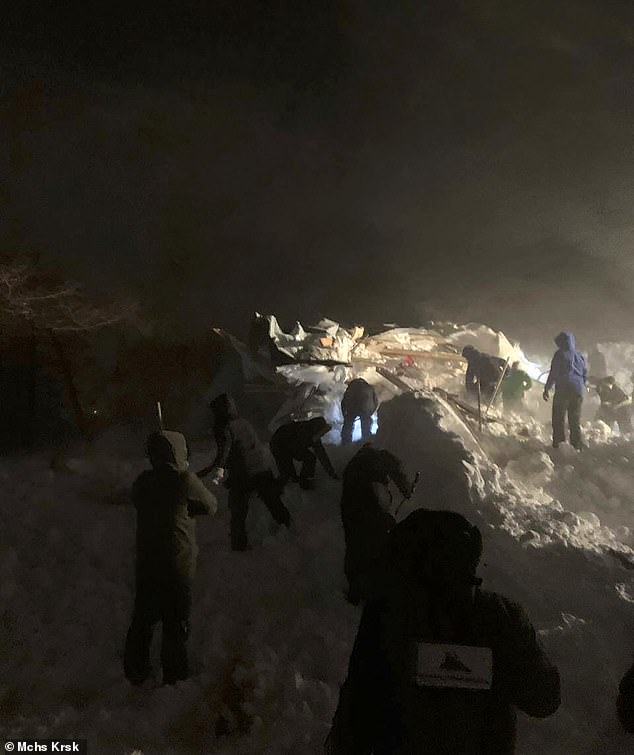 Despite fears of another avalanche, rescuers worked through the night to try and get other people out to safety

They were desperately digging to locate a singing mobile phone under the snow.

‘Rescuers are trying to figure the exact area where the signal is coming from,’ he said.

‘People are continuing to come to help, many are walking to the site with their own shovels.

‘A huge amount of equipment is used at the site, everyone is doing their absolute best to find the people.

‘I came to the site as soon as I heard about the avalanche. Our house is at the site, the snow stopped some five metres from our door.’

A criminal case has been opened.