Student gets 360 DEGREES! Incredible moment teenager draws the PERFECT circle on a white board at school talent show… then walks off stage like a pro

A student showcased his impressive talent of drawing a perfect circle at a talent show.

Lucas Burt took to the stage to show the world his incredible skill during the show at his school in Bangor, Maine on April 4 last year.

Fellow student Caleb Bois, 18, captured the moment Lucas took to the stage to wow the crowd, sporting black sunglasses and two people to hold the whiteboard.

The clip begins with Lucas, wearing a vest with no shirt, saying ‘hit it’ as the song ‘Ultimate’ by Denzel Curry begins to play.

He is handed the pen and approaches the board before mimicking a miniature circle with one of his hands, foreshadowing the main event.

Swinging his arm in a counter-clockwise motion, he outlines an inch-perfect circle, causing one of his assistants to ‘faint’ in seeming rapture at the performance. 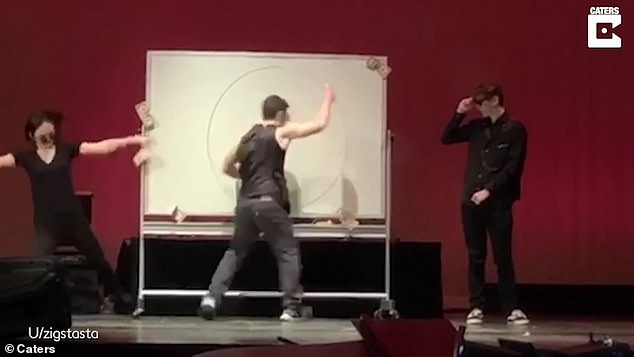 Swinging his arm in a counter-clockwise motion, he outlines an inch-perfect circle, causing one of his assistants to faint in seeming rapture at the performance

The crowd applaud as Lucas walks offstage and the curtains close – while the rest of his team pick up the woman who ‘fainted’ and carry her away.

The clip was uploaded to Reddit in October this year.