Two luxury waterfront high-rises in southern India were reduced to rubble in controlled explosions Saturday in a rare example of authorities getting tough on builders who break environmental rules.

The 19-floor H2O Holy Faith complex of 90 flats – overlooking Kerala state’s famous lush backwaters – was the first to go down, collapsing in just a matter of few seconds.

A thick grey cloud of dust and debris cascaded down after officials detonated explosives drilled into the walls of the building, which had been occupied for several years until the Supreme Court ruled last May that it was constructed in violation of coastal regulations. 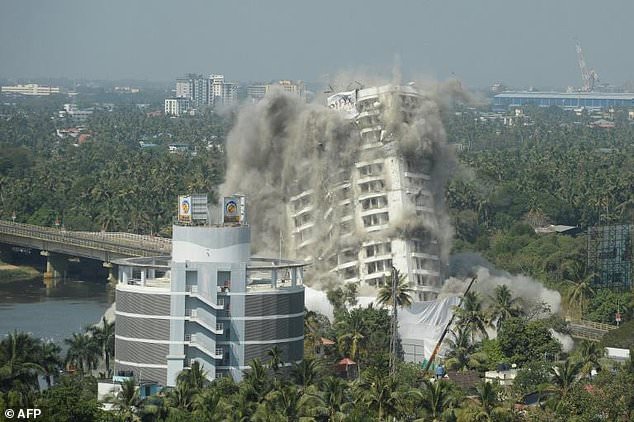 Minutes later, the twin towers of Alfa Serene tumbled down with an ear-splitting noise. The remaining two complexes will be razed on Sunday.

A crowd of onlookers who flocked to nearby terraces and roads watched the demolition, after officials in helicopters conducted aerial surveys.

India has seen a construction boom in recent years but developers have often ridden roughshod over safety and other regulations, with the connivance of local officials.

The inhabitants of the apartment blocks in the well-off Maradu district of Kochi city had bought their 343 flats in good faith and now face a lengthy legal fight to recoup their money. Some had invested their life savings. 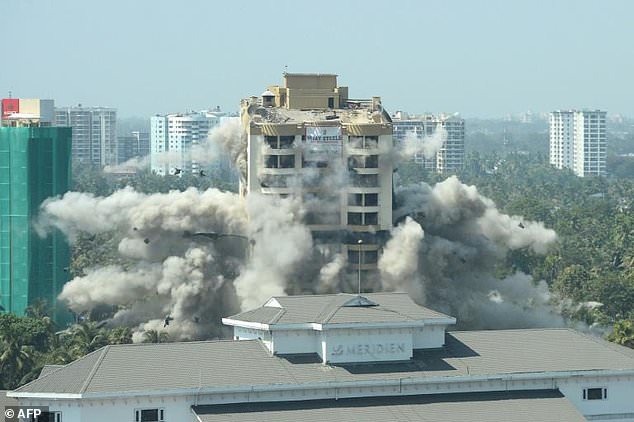 Sirens went off on Saturday warning people gathered for the demolition to remain at a safe distance while ambulances and fire engines stood on standby.

Ahead of the work, nearby residents told AFP they were worried about the impact of the demolition on their homes.

‘When they were demolishing the swimming pool, some of the houses in our neighbourhood developed cracks, we are really worried,’ said Divya, who has moved into temporary accommodation.

Over 2,000 residents living in the neighbourhood were evacuated as a part of safety measures.

The demolition capped a saga that began in 2006 when a local governing body granted permission to private builders to erect the high-rises.

But last year, the Supreme Court ruled that the builders were in breach of rules about construction in an ecologically sensitive coastal zone, calling it a ‘colossal loss’ to the environment.

‘It’s a high-tide area and hundreds of illegal structures have come up in the coastal zone,’ the court ruled as it ordered the buildings razed.

On Friday the court also ordered the demolition of a resort in neighbouring Alappuzha district after its owners lost the appeal of a 2013 ruling that said the structure violated environmental regulations and must be demolished. 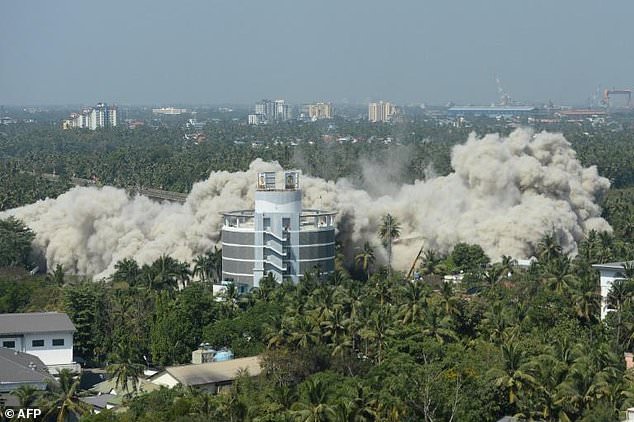 Kerala is famed for its brackish lagoons and lakes that run parallel to the Arabian Sea — creating an environmentally fragile region.

In 2018, the state was battered by its worst floods in almost a century that killed more than 400 people.

Experts blamed the disaster on the government’s eagerness to build houses, hotels and resorts with little regard for coastal planning regulations.

The residents of the Maradu apartments initially refused to vacate but moved out after local authorities cut water and power supplies.

They have been given interim partial compensation by the state government while the builders are in the process of providing a refund.

Shamshudeen Karunagapally, who bought a flat for $145,000, said his wife and children did not watch the buildings go down as it was ‘too painful for them to see their dreams shatter before their eyes’.

‘We are suffering without any fault,’ he told AFP.