A cyclonic storm equivalent of a category 4 hurricane is gathering speed and is set to hit India on Friday morning as almost one million people are being evacuated in the eastern state of Odisha.

Cyclone Fani is forecast to be the worst storm since 2014. The navy and the coast guard have deployed ships and helicopters for relief operations, according to a government statement. 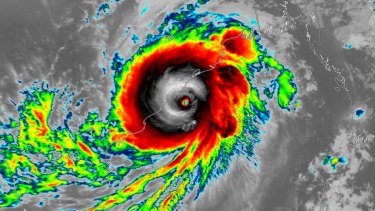 Tens of millions of people are potentially in the path of what the India Meteorological Department called an "extremely severe cyclonic storm".

Not long after 11.30 pm local time on Thursday in Puri, India (4am AEST on Friday) satellite data from the department showed outer bands of the storm battering the Indian coastline as the storm's eye moved north.

Odisha is battered by cyclonic storms every year with some intense enough to damage crops, plantations, trees, mud houses and communication and electric poles, as well as disrupt road traffic and transportation of essential goods. Severe storms also affect operations at oil and gas fields in the region and threaten lives of people and animals.

Sea levels may rise about 1.5 metres above astronomical tide, said Madhavan Nair Rajeevan, secretary at India's Ministry of Earth Sciences. Wind speeds will likely reach as high as 200 km/h at the time of the landfall in Odisha, he said. 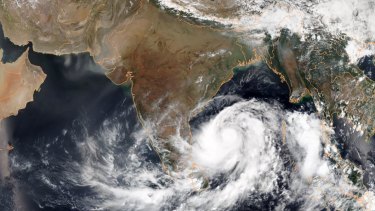 A satellite image of Cyclone Fani in the Bay of Bengal on Wednesday.Credit:National Oceanic and Atmospheric Administration

The state was battered by a super cyclone in 1999 with wind speeds that were estimated to have reached a maximum 270 km/h leaving almost 10,000 people dead. The ensuing rains caused flooding and temporarily cut off the state from the rest of the country.

"We are on the job and have sufficient time to evacuate people from the coastal areas," said Bishnupada Sethi, special relief commissioner with the Odisha government. About 150,000 people have already been relocated and contingency plans are in place to deal with heavy flooding, he said.

The administration has stocked up medicines and food supplies in preparation, said N.C. Marwah, a member of the National Disaster Management Authority. As many as 48 National Disaster Response teams are ready to be deployed, he said.

Prime Minister Narendra Modi, who held a meeting on Thursday to review the preparations, has asked top officials to take preventive measures as well as make preparations for relief and rescue operations, according to a government statement. 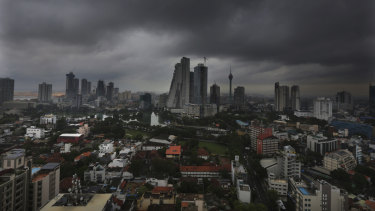 The cyclonic storm Fani over the south-east Bay of Bengal to the east of Sri LankaCredit:AP

In the beach village of Chandrabhaga, police helped residents move from thatched-roof homes to a nearby storm shelter on Thursday afternoon. They sat on the floor of the shelter or in plastic chairs awaiting the arrival of the storm. By evening, the sea had turned rough and strong winds were lashing buildings along the coast.

The meteorological department warned of the "total destruction" of thatched huts in some districts, major damage to roads, the uprooting of power poles and potential danger from flying objects. 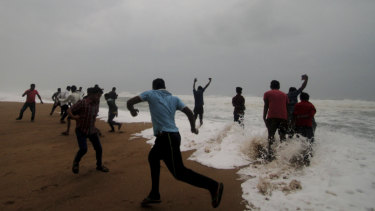 People run away from high tide at a beach in the Puri district of eastern Odisha state, India.Credit:AP

Fishermen have been asked not to venture into deep seas and those who are already there have been advised to return to the coast. Indian Railways has cancelled more than 100 trains in the region and diverted several others to avoid damage to passengers and goods, a spokesman for the ministry said.

Neighbouring Bangladesh also issued a weather warning. Mongla and Payra ports have been asked to hoist danger signal number seven on a scale of 10, according to the Bangladesh Meteorological Department. The country has suspended river transport on all routes, State Minister for Shipping Khalid Mahmud Chowdhury said in Dhaka.

The cyclone forecast has prompted several companies with operations in the region to take precautionary measures. 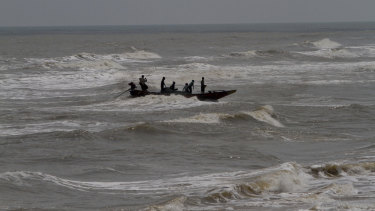 Indian fishermen attempt to bring their boat ashore amid strong winds at Chandrabhaga beach in the Puri district of eastern Odisha state, India.Credit:AP

"Weather is clear as of now and operations are all normal," he said. "Paradip refinery is designed to withstand cyclones with speed of more than 200 kilometres per hour."

Oil & Natural Gas said it has towed five of its six drilling rigs operating in the Bay of Bengal to the coast as a precautionary measure, and evacuated almost 500 people working at its offshore oil and gas fields in the region. State-run National Aluminium said a cable belt conveyor from the mines to its refinery will be stopped in the event of heavy gusts, while heavy equipment operating in the field will get proper anchoring and locking.

Airlines are also preparing to deal with the situation. Vistara, a joint venture between Singapore Airlines and India's Tata Group, said in a Twitter post it will waive cancellation charges for flights to Bhubaneswar, capital of Odisha, and Kolkata, capital of West Bengal, for travel between May 2 and May 5. Market leader IndiGo cancelled all flights to Visakhapatnam, in Andhra Pradesh, for Thursday and will cancel all flights to and from Bhubaneswar on Friday. 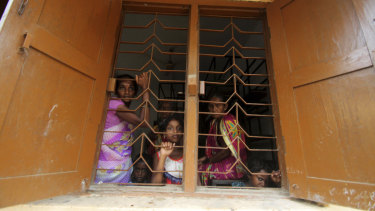 Villagers of Chandrabhaga fishing village take shelter at a government run school building after they were evacuated by the authorities in the Puri district of eastern Odisha state, India.Credit:AP

Cyclone Fani is likely to have a sustained wind speed of 170-180 km/h when it hits the coast on Friday. That compares with Hudhud storm's wind speed of 180 km/h in 2014, according to data from the weather office. Cyclone Phailin, that battered Odisha and parts of Andhra Pradesh in 2013, saw surface wind speeds of about 215 km/h.

Bloomberg with The New York Times