Agra: From a rickety fishing boat on the Yamuna River, Sumit Chaurasia points out how the setting tangerine sun catches the sparkle of the mother-of-pearl embedded in the Taj Mahal, India’s majestic monument to love.

For a decade, Chaurasia, 35, has made such poetic observations to tourists. But since March 2020, when his country imposed a nationwide lockdown to curb the coronavirus, its monuments have been largely closed. Visas for foreign tourists have been suspended, and he and legions like him have been out of work. 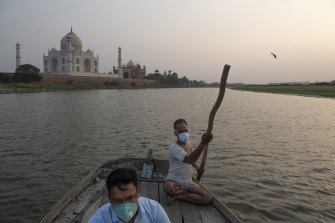 Sumit Chaurasia, left, a guide at the Taj Mahal, in front of the monument in Agra, India, in June, while on the Yamuna river, after the monument reopened. Credit:Saumya Khandelwal/The New York Times

While the Taj Mahal partially reopened in mid-June — with strict limits on the number of visitors — Chaurasia’s life, like much of the country, remains in limbo: no longer totally shut down, but far from fully normal or safe.

“The corona is still with us,” said Chaurasia, pointing out the flames licking the riverbank from a crematory next to the monument. This northern spring Agra, like India’s capital, New Delhi, ran out of space to cremate its dead, with thousands a day dying from COVID as India experienced one of the world’s most catastrophic encounters with the disease.

The crowds that usually throng the Taj at sunset have been reduced to a handful of mostly local residents, roaming around the 10-hectare complex for just under $US4 a ticket.

This near-emptiness makes Chaurasia cry, but he prefers it to the alternative despite the hardships it imposes on him and the family he supports: elderly parents, a wife and two young daughters. 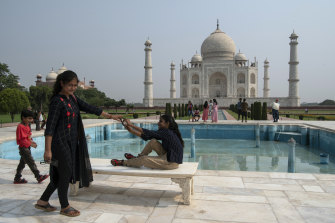 Families at the Taj Mahal in Agra, India, in June. Rather than the typical global mix of travelers, it is now visited mostly by local residents. Credit:Saumya Khandelwal/The New York

“Don’t sacrifice your life to visit the Taj Mahal,” he said as the boat gently bobbed on the holy Yamuna while monarch butterflies fluttered and pelicans soared over the trash-clogged shores.

India is only now emerging from its traumatic spring, when a devastating second wave of the coronavirus hit, imprinting grim memories of frantic searches for hospital beds, medicine and oxygen — and of funeral pyres that burned day and night, turning the skies an ash grey.

As case numbers have fallen, authorities have cautiously reopened the country, including monuments like the Taj Mahal. But just 4 per cent of the country’s 1.4 billion people are fully vaccinated, and health officials warn another wave may be looming, casting a pall over the life that is starting to return.

“We don’t go out unless it’s necessary,” Chaurasia said. 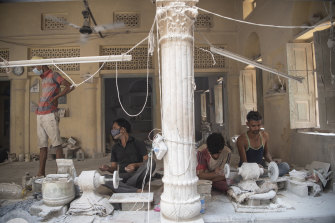 Craftsmen work at a marble inlay factory in Agra, India, June 24, 2021. The scarcity of visitors is a problem not only for Agra but also for the Archaeological Survey of India, the government agency that uses its share of the ticket sales to the Taj Mahal to restore and maintain many of the 3500 lesser-known but historically significant monuments from India’s long, epic history. Credit:Saumya Khandelwal/The New York Times

Agra, with a wealth of Indo-Islamic architectural treasures including the Taj, is usually cacophonous and traffic choked. It is now quiet and uncrowded, and so too are the stores selling the inlay marble handicrafts and treacly sweets for which the city, the onetime capital of the Mughal empire, is famous.

Agra is an essential stop for anyone visiting India, from backpackers to presidents — Donald Trump visited in February 2020 during a state visit — and about 800,000 people in the city, half its population, are dependent on tourism.

Virtually all of them have been affected, said Pradeep Tamta, a city tourism official. Many of the artisan workshops that populate Agra’s ancient streets have not survived 15 months of intermittent lockdown, and most of the rest are struggling.

In an open-air building along a narrow alley, Irfan Ali, 51, hunches over a machine used to file down shards of mother-of-pearl into moons, stars and other shapes that will later be adhered to marble in intricate patterns on tiles, tabletops, vases and trays.

Foreign tourists, Ali said, have over the years driven up demand for the art form, which represents the materials and motifs of Agra’s most famous monument.

“They wanted a piece of the Taj Mahal,” he said. “Now there’s only silence.”

Across town, Gaurav Goel, the co-owner of a family sweets business, still bears the shaved head of a Hindu mourner.

The shop, Panchhi, was named for its founder, Goel’s great-grandfather, Pancham Lal. The family specialises in petha, a syrupy sweet Agra delicacy made from ash pumpkin, a grayish gourd, boiled in lime water and sugar. According to folklore, petha was invented in the 1630s while the Taj Mahal was being built, to keep the 20,000 labourers energised through Agra’s intense summer heat.

Goel’s grandfather, Kanhaiya Lal Goyal, greatly expanded the business by experimenting with new flavours like saffron and cardamom and slicing blocks of petha into different shapes. A cancer patient, he died of complications from COVID-19 in May.

In normal years, Goel’s five shops sell about $US1.3 million worth of sweets. In 2020, his sales fell by 40 per cent. But he feels ambivalent about customers returning.

“The loss of business doesn’t hurt us emotionally,” he said. “It’s more that we don’t lose someone.”

The scarcity of visitors is a problem not only for Agra but also for the Archaeological Survey of India, the government agency that uses its share of the Taj’s ticket sales to restore and maintain many of the 3500 lesser-known but historically significant monuments from India’s long, epic history.

The pandemic is not the only challenge facing the Taj.

Leaders of India’s governing party, the Hindu nationalist Bharatiya Janata Party, have sought in recent years to recast the Taj — built by the Mughal Emperor Shah Jahan to entomb his beloved queen, Mumtaz Mahal — as a symbol of the Muslim invasion of India.

Yogi Adityanath, a Hindu monk and the top official in the state of Uttar Pradesh, where Agra is, took the monument off a state list of tourist sites, and has said it does not “reflect Indian culture.”

Sumit Upadhyay is a member of the ruling party, known as the BJP. But he is also an Agra-based travel agent, and as he strolled the Taj’s grounds, his loyalties to his hometown and his business seemed to take precedence over the party.

He said the Taj has been neglected while its revenues have been partially channelled by Adityanath’s government into “enhancing their own monuments,” including a temple elsewhere in Uttar Pradesh devoted to the Hindu god Ram. The temple is being built over the rubble of a mosque that a Hindu mob destroyed in 1992.

“They are not doing anything for the Taj Mahal,” he said of the state government. “You have to take care of this monument if you want people to come into India.”

On its busiest days since reopening, the Taj Mahal is hosting 2000 visitors — less than one-tenth its capacity.

For the people who dare visit, however, it’s an extraordinary experience. The texture lost in a crowded space emerges like bas-relief when it is empty.

Lime-green parakeets dart across the Mughal gardens and reflective pools. Inside the mausoleum, the typical jostling for a close-up look at the detail of the carved amber, jade, coral and lapis lazuli is replaced by a sense of the tomb’s scale and solemnity.

A normally hectic and very public place has become a kind of private refuge.

Hara Khan and Satyam Singh, a couple in their 20s who connected online during the pandemic last year, sought out the shade of one of the mausoleum’s arched balconies. Singh had travelled by train from Delhi to meet Khan for her birthday.

They lost a mutual friend to COVID-19 this spring.

“It’s amazing,” Khan said of the monument reopening. “We were planning for a whole one year,” she said shyly, stealing a glance at Singh. “This is the first time we meet.”