Jakarta: Authorities have shut most schools in parts of Indonesia's Sumatra island to protect children from a thick, noxious haze as deliberately set fires burn through peatland forests, officials said.

The country's Disaster Mitigation Agency said more than 3600 fires have been detected on Sumatra and Borneo islands by weather satellites, leading to very poor air quality in six provinces with a combined population of more than 23 million. 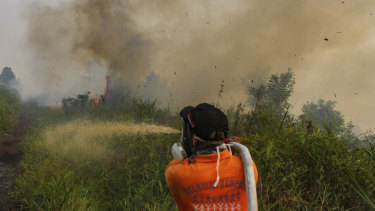 Nearly every year, Indonesian forest fires spread health-damaging haze across the country and into neighbouring Malaysia and Singapore.

The neighbours regularly complain about the smog but Indonesia said this week it was not to blame and fires had been spotted by satellites in several neighbouring countries.

“The Indonesian government has been systematically trying to resolve this to the best of its ability. Not all smog is from Indonesia,” Environmental Affairs and Forestry Minister Siti Nurbaya Baka said, while urging Malaysia to be more transparent about the situation, state news agency Antara reported.

Several parts of Southeast Asia have seen unusually dry conditions in recent months including Indonesia, which has seen very little rain because of an El Nino weather pattern, its meteorological department has said.

Authorities have deployed more than 9000 people to fight the fires, which have razed more than 162,000 hectares of land in the provinces of Riau, Jambi, South Sumatra, West Kalimantan, Central Kalimantan and South Kalimantan. 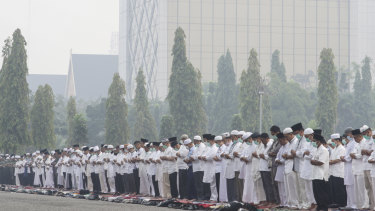 Riau provincial secretary Ahmad Syah Harofie said air pollution hit hazardous levels in the provincial capital, Pekanbaru, and was very unhealthy in many other areas. Several thousand schools in the capital and three other cities and districts have been closed since Tuesday.

He said nearly 300,000 people in the province have suffered respiratory illnesses since January, when it and the five other provinces declared states of emergency due to the forest fires.

The fires burnt parts of the Tesso Nilo National Park in Riau, home to about 140 endangered wild elephants, according to Edward Sanger, the local disaster agency spokesman.

Thousands of Muslims, many wearing face masks to protest themselves from the smoke, joined mass prayers for rain in Pekanbaru.

Mosques in Malaysia have also been encouraged to hold prayers for rain, said the head of Malaysia's Islamic Development Department, Mohamad Nordin, according to the state news agency Bernama.

About 8000 people have suffered respiratory problems in the past week alone, according to Jambi's health office.

The Disaster Mitigation Agency said satellites had detected about 5062 hotspots nationwide on Wednesday morning, with the largest number in Central Kalimantan on Borneo island. It said 37 helicopters have dropped nearly 240 million litres of water as part of the firefighting efforts.

The number of hotspots declined significantly to 2388 on Wednesday afternoon, the agency said.

The haze is an annual problem for South-east Asia. Record Indonesian forest fires in 2015 spread haze across a swath of the region, and according to a study by Harvard and Columbia universities, hastened 100,000 deaths.

The fires are often started by small landholders and plantation owners to clear land for planting. Many areas of are prone to rapid burning because of the draining of swampy peatland forests for pulp wood and palm oil plantations.

Criminal cases have been initiated against 175 people in different places on suspicion of starting fires while four palm oil companies were facing charges of negligence, police told media.

The Indonesian Forum for the Environment said small-scale farmers were being blamed for fires started by palm oil plantation companies.

"Actions by the central and local governments have not been strong enough against companies in industrial forests or palm plantations on peat lands. They always blame the community," said Muhammad Ferdhiyadi of the group's South Sumatra branch. 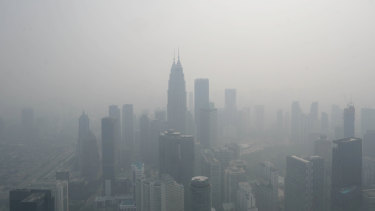 The Petronas Twin Towers, centre, and other buildings stand shrouded in haze in Kuala Lumpur, Malaysia, on Wednesday,Credit:Bloomberg

In Malaysia, Kuala Lumpur and the government administrative centre of Putrajaya were among the areas shrouded in thick smog. On Tuesday, hundreds of schools in eastern Sarawak state bordering Kalimantan province were closed for a day after air quality spiked to unhealthy levels.

Malaysian authorities plan to conduct cloud-seeding activities to induce rain to ease the haze. The government has said it will press Jakarta to take immediate action to put out the burning forests and ensure the fires won't occur again.