Is this the super-size classroom of the future? Inside primary school’s ‘lecture’ theatre where a single teacher oversees 67 pupils

Pupils at a primary school in Devon are being taught in super-size classrooms where a single teacher oversees 67 pupils in one lesson.

Broadclyst Community Primary School has one of the highest average class sizes in the country, where 42 pupils will sit in on each session.

Current rules state that children under the age of seven shouldn’t be in classes with more than 30 pupils.

This is while there are no rules for those over that age and Broadclyst’s headteacher Jonathan Bishop has slammed claims that these class sizes could be hindering the education of students. 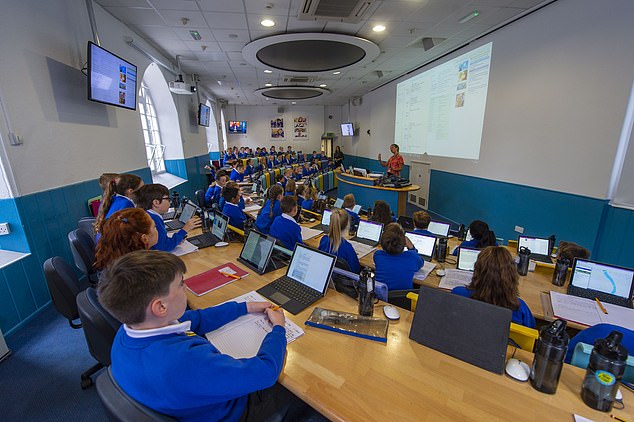 The lecture theatre style room at Broadclyst Primary School in Devon, which can seat up to 67 pupils

Speaking to The Sunday Times he said he didn’t feel 30 was a ‘magic number’ to get better quality education.

‘Our year 6 classroom has got 67 children in once room. There are times when one teacher teaches those 67 children. Is that wrong, of course it’s not wrong.

‘Our year 6 classroom is designed like a lecture theatre, I can seat 67 children in there, I know I will be public enemy No1 by saying this.’

The school currently has a ‘outstanding’ rating by Ofsted, but despite this experts have said that people who believe high quality education can be adhered to in such an environment as similar to that of Broadclyst are ‘mistaken’.

Pupils at Broadclyst are part of more than 559,000 primary school students in the UK which have been taught in the so-called super-size classes, compared to 501,000 just five years before.

On average school receive a budget of £3,500 to £5,000 per pupil, and it’s thought that arrangements such as lecture style teaching have been put in place to hep schools boost their budgets.

Concerns have been raised that the UK educational system could be moving towards that of one similar to Asia where children are taught in large classes.

Professor of education at Buckingham University, Alan Smithers said classes like the ones in Devon were damaging and were one of the reasons why some parents were choosing to have their children privately educated.

He said that funding cuts were pushing schools to large class sizes and that younger children needed personal attention.

Despite this, other schools in the UK are also using similar methods to that of Broadclyst, and Dr Challoner’s Grammar School in Buckinghamshire has also adopted larger classes in the hope it will prepare its students for university.

Headmaster David Atkinson said the average size of a class at the school is 32 and that sixth-formers have more than 210 pupils per class.

In England class sizes have continued to grow over the last five years.  In secondary schools there were around 402,000 pupils in classes of more than 30, a 44 per cent rise from five years ago.