Houston, we have a problem! Inside the biggest battle for cislunar space – the area between Earth and the moon – since the Cold War era as nations and private companies plan 100 lunar missions in the next decade

Space is about to get crowded with up to 100 lunar missions set to be launched within the next decade.

Far from being empty blackness, space looks to become busier than ever, surpassing the level of interest in the moon since the Cold War space race of the 1950s and 60s.

But rather than well known companies such as Jeff Bezos’ Blue Origin or Richard Branson’s Virgin Galactic taking part, who have so far launched rockets in low-Earth orbits, there are a host of several other nations and private companies that are planning missions to the Moon.

So many companies are lining up experts are predicting the area between Earth and the moon, specifically known as cislunar space, to become strategically important.

There is also concern that as the area becomes busier it could potentially lead to greater competition over resources and positioning, as well as geopolitical conflicts. 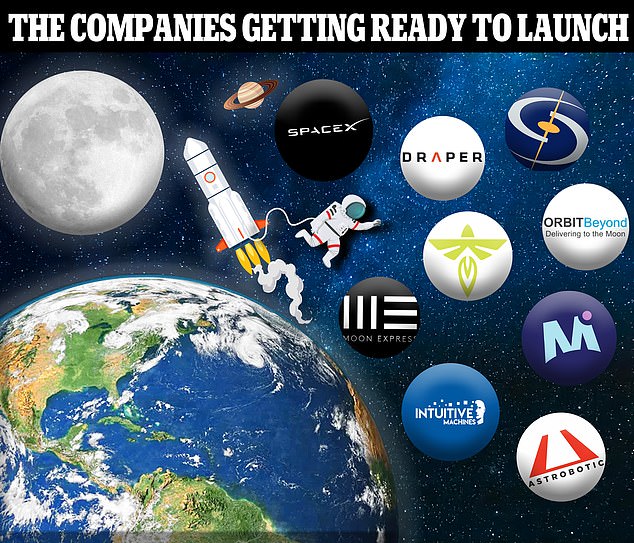 Space is about to get crowded with up to 100 lunar missions set to be launched within the next decade. Above, the companies who are planning to take part – 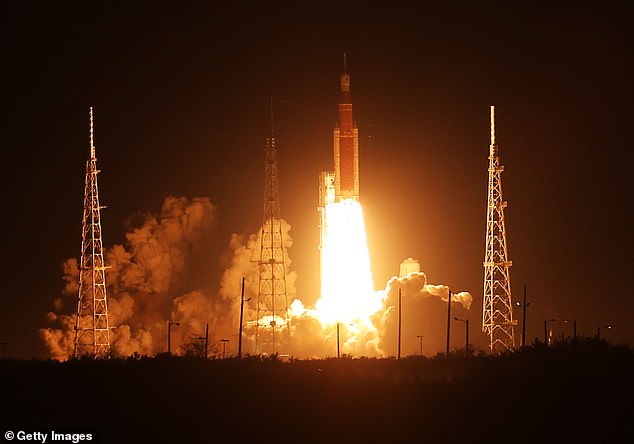 NASA’s Artemis I Space Launch System (SLS) rocket, with the Orion capsule attached, launches at NASA’s Kennedy Space Center in November. The Artemis I mission will send the uncrewed spacecraft around the moon to test the vehicle’s propulsion, navigation and power systems as a precursor to later crewed mission to the lunar surface 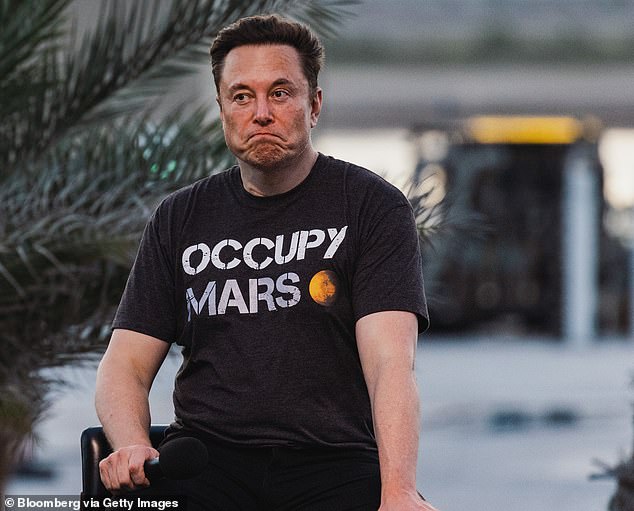 Elon Musk, co-founder and chief executive officer of SpaceX started the company in 2002 with the goal of reducing the cost of space launches and making it possible for humans to live on other planets

To the Moon and back?

NASA has identified nine companies it believes are up to the task of getting its experiments to the Moon (and maybe back):

Both the US and China have ambitious lunar exploration programs in the works, with plans to land astronauts on the moon and build habitats and infrastructure in orbit.

In April 2021, NASA selected Elon Musk’s SpaceX to develop a human landing system variant of its Starship vehicle to take astronauts to the lunar surface during NASA’s Artemis-III mission.

As part of that contract, SpaceX will conduct an uncrewed demonstration mission to the Moon prior in the near future.

With the conclusion of Artemis I in December, attention will now shift toward SpaceX. NASA is relying on a version of Starship, the company’s next-generation spacecraft that has not yet flown to space, to land astronauts on the moon.

SpaceX also plans to launch a private crew on a tourism flight in lunar orbit.

Other countries, such as South Korea, the UAE, India, and Russia also have planned robotic missions to the Moon while private companies in the U.S., Japan, and Israel are also racing to the moon.

‘We’re already seeing this competing rhetoric between the U.S. government and the Chinese government,’ said Laura Forczyk, executive director of Astralytical, a space consulting firm based in Atlanta told NBC.

‘The U.S. is pointing to China and saying, “We need to fund our space initiatives to the moon and cislunar space because China is trying to get there and claim territory.” And then Chinese politicians are saying the same thing about the United States.’

While increased access to space brings many benefits, it also raises the potential for tensions over competing interests which could have significant economic and political consequences.

‘During the Cold War, the space race was for national prestige and power,’ said Kaitlyn Johnson, deputy director and a fellow of the Aerospace Security Project at the Center for Strategic and International Studies to NBC News. ‘Now, we have a better understanding of the kind of benefits that operating in cislunar space can bring countries back home.’

Cislunar space generally refers to the area between Earth and the Moon, including the moon’s surface and orbit.

Lunar missions and activities including landing on the Moon, launching from the Moon, and building habitats and infrastructure on or around the Moon together with communication and navigation satellites would all be considered to be taking place in cislunar space.

In November, the White House released its own strategy for interagency research on ‘responsible, peaceful, and sustainable exploration and utilization of cislunar space.’

The space agencies and commercial companies looking to launch will be wanting specific strategic orbits and trajectories,

The sudden increase in traffic is due to launch costs becoming cheaper thanks to better technology and more competition driving down the price of firing objects into orbit.

The potential is yet untapped by there appear to be resources out in space that could help human missions whether it be ice deposits on the Moon to precious metals in asteroids. 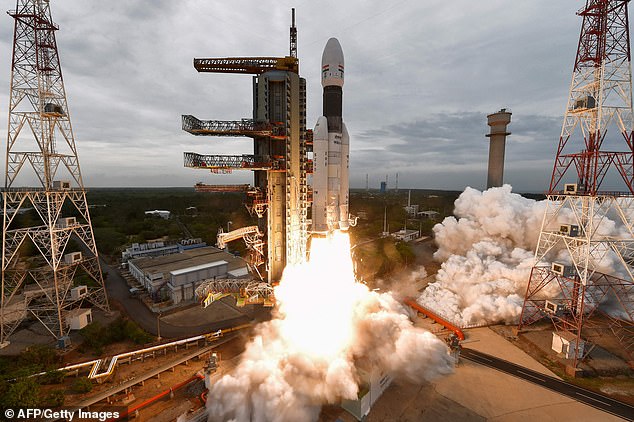 A rocket launched by the Indian Space Research Organisation, Chandrayaan-2 (Moon Chariot 2), is seen in 2019

‘Once people started really thinking through that, they realized that that water-ice can provide substantial resources or enable the gathering or collection of resources elsewhere in the solar system,’ said Marcus Holzinger, an aerospace engineering professor at the University of Colorado.

Water ice could help sustain human colonies on the Moon, or be split into oxygen and hydrogen to fuel rockets heading into deep space.

In 1967 the Outer Space Treaty saw more than 110 countries counted signing on declaring outer space should be used to benefit all of humankind with no one country able to claim or occupy the cosmos.

In 2020, the Artemis Accords established nonbinding multilateral agreements between the U.S. and more than one dozen nations to maintain peaceful and transparent exploration of space.

‘Now we’re sort of seeing the rubber hit the road because all of a sudden there are potentially geopolitical interests or commercial interests,’ Holzinger said. ‘We have to maybe come up with a more nuanced approach.’

Another tricky part of cislunar space is the number of objects already up there including satellites in low-Earth orbit and geostationary orbit.

Their paths are often not circular making them harder to find and keep track of, thus presenting their own challenges.

The farther from Earth satellites and other spacecraft may be, the harder it is to predict their paths with their trajectories influenced by the planet, Sun and Moon.

But if humans want to venture beyond the Moon and head to Mars safety and transparency will be key.

‘Those elements have to be there,’ Jim Myers of research organization The Aerospace Corporation said. ‘Unless we do this in a very thoughtful way, unless we plan, we’re going to run into all sorts of trouble.’