Why we joined the coast to coast clean-up: The inspiring stories of those who spearheaded the war on litter last year

Last May, volunteers from across the UK turned out in force for the Daily Mail’s Great Plastic Pick Up. Some were so inspired by our campaign that they’ve been meeting up for regular events of their own, gathering friends, colleagues, relatives and neighbours to join the fight. But all are united in the conviction that this year’s Great British Spring Clean will be the biggest yet.

We catch up with some of the litter heroes who’ll be returning for this year’s campaign. Why don’t you join them?

‘People drink on the hoof and, if there’s not a bin, they’re thrown out of cars. There needs to be more litter bins along routes.’ 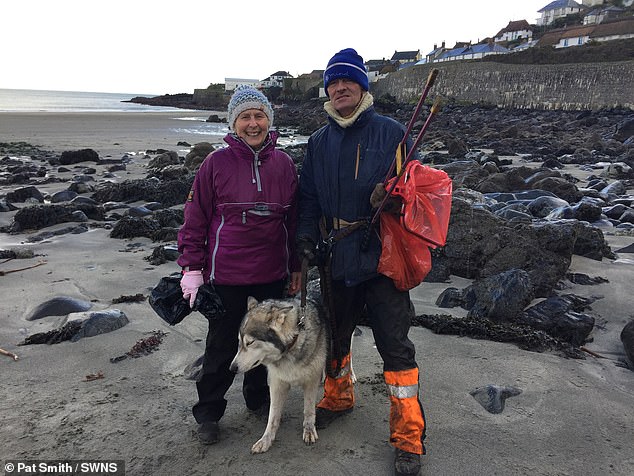 Wayne Dixon is half way through an 8,000-mile walk around Britain’s coastline with his dog, Koda. The Army veteran, 47, is litter-picking on his way to raise money and awareness 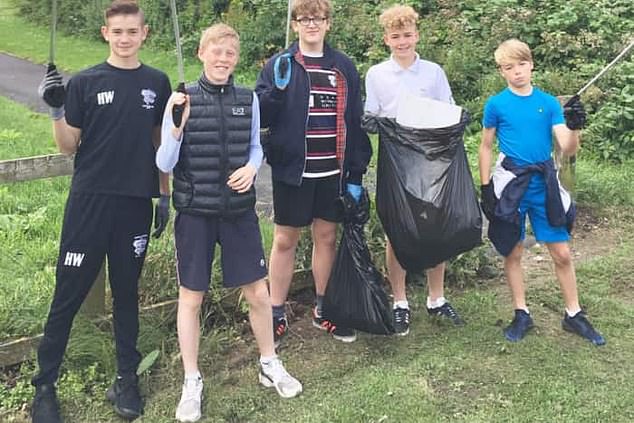 Stewart Hind drummed up support at Hartlepool Rugby Club, recruiting up to 40 people to pick up litter last year

‘We have never stopped meeting regularly and clearing up the town we all love,’ she says. ‘I want our community to be proud of the work we do and, in turn, be proud of where they live.’

Retired police officer Andy Wright, 48, organised a pick-up at Fred Longworth High School in Tyldesley, near Wigan, during a ‘fun day’ last year that ‘no doubt’ raised awareness of litter.

He says: ‘There were hundreds of families there and we filled bags and bags of plastic.’

Wayne Dixon is half way through an 8,000-mile walk around Britain’s coastline with his dog, Koda. The Army veteran, 47, is litter-picking on his way to raise money and awareness.

He says: ‘It doesn’t matter if it’s near a big city or a beautiful place — it will have the same type and amount of litter.’ 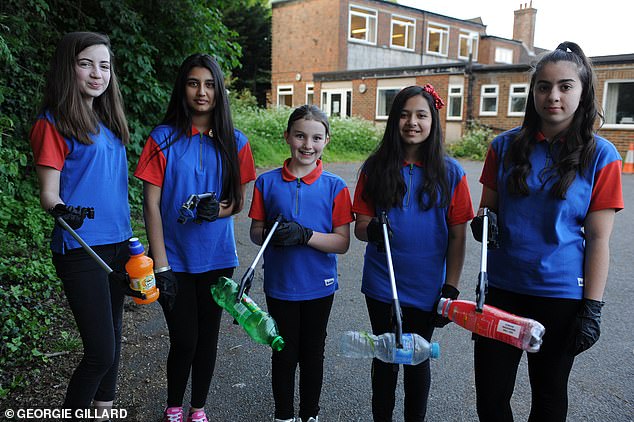 Stewart Hind drummed up support at Hartlepool Rugby Club, recruiting up to 40 people to pick up litter last year.

‘We had a number of volunteers who were willing to help the community,’ he says. ‘We’ve picked up food packaging from takeaways, plastic bottles, even metal and tyres.’

Teacher Dawn Watson, 37, says: ‘We were really pleased with how it went. We’re a school for children with severe special needs, so going out into the community can be traumatic. But even our most profoundly disabled students really enjoyed it.’

Cathy Brotherton held a clean-up last year after becoming frustrated at the piles of rubbish left on roads between Dewsbury and Huddersfield.

‘The amount of takeaway containers, beer cans and bottles thrown out of car windows on to verges and into fields, which then get smashed, injuring the animals, is unbelievable,’ she says.

‘We encourage people to go into the countryside, which always gets neglected.’

Chris Dunster, 50, from Olton, near Solihull, says: ‘The Spring Clean enables us to do a targeted approach and collect en masse a whole lot more litter than normal.

‘In Solihull, litter-picking is going from strength to strength, so residents are really getting behind it and taking ownership of their local areas. It’s very encouraging.’ 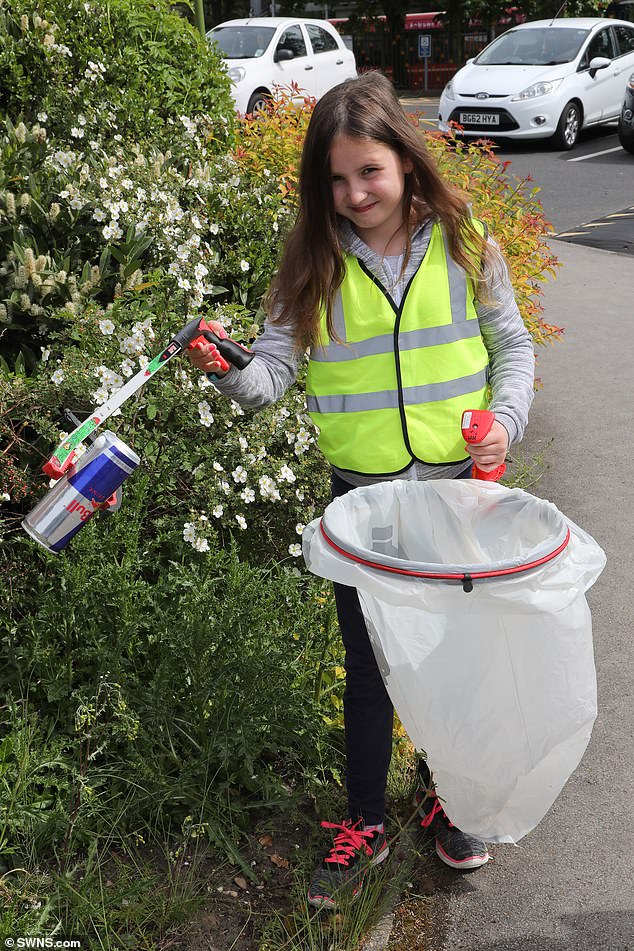 Pictured: Connie Sheridan, aged nine, who helped out with a little pick at Olton Library

Alan Preece, senior warden at the Saltwells Local Nature Reserve in Dudley, will be rallying volunteers to take part this year.

‘As an urban nature reserve, we do get litter and fly-tipping, ranging from cigarette butts to three-piece suites,’ he says.

‘Luckily, we are assisted by two great teams of volunteers who join us to make a difference.’

‘I’m interested in protecting the environment and clearing up plastic,’ says Miss Cain, who this year will be joining The Great British Spring Clean.

Dundee-based Shoaib Khan, 37, is a regional youth leader for the Ahmadiyya Muslim Youth Association. During the Great Plastic Pick Up, he took volunteers to Corrie Fee, Angus.

He says: ‘Last year, we did one clean-up as part of the campaign. Hopefully, this year, we’ll do two or three.’

Recruited via a community Facebook page in Barry, South Wales, members raised money in order to buy their own litter-picking equipment. 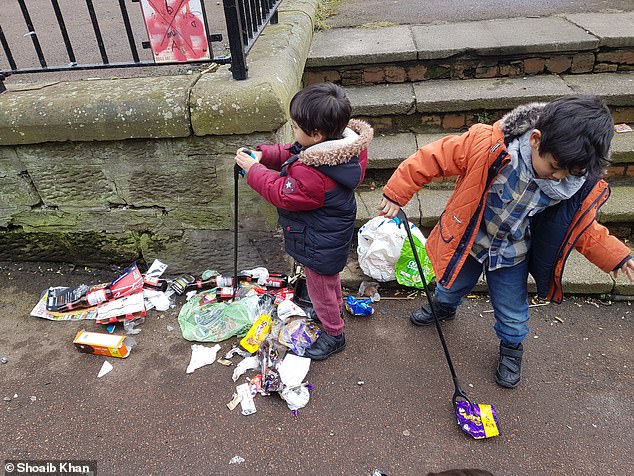 Dundee-based Shoaib Khan, 37, is a regional youth leader for the Ahmadiyya Muslim Youth Association. During the Great Plastic Pick Up, he took volunteers to Corrie Fee, Angus

The retired conference manager, 65, says that for her five-year-old grandson, picking up rubbish has become second nature.

‘My grandchildren took it really seriously,’ she explains.

‘It was really successful from our point of view,’ says teacher Karen.

‘We got a whole unit involved and the girls really enjoyed doing it. We also got a lot of positive comments from local people when they saw what we were doing.’

For former bank manager David Hewett, litter-picking is a retirement project. The 76-year-old walks between Putney Rowing Club and Kew Bridge Road once a week collecting rubbish on the pedestrian path, where dog litter bags, bottles and plastic bags are commonplace.

He says: ‘Such items spoil the picturesque pedestrian path beside the Thames River.’

After last year’s successful plastic campaign, his team is aiming to make an even bigger impact in their area, starting with local schools.

They are visiting six in the town and encouraging them to get involved in The Great British Spring Clean. ‘We’ll really push it this year because we did so well last year,’ he says.

‘Litter is a big part of the community in Sudbury — it’s something we are all passionate about clearing.’ 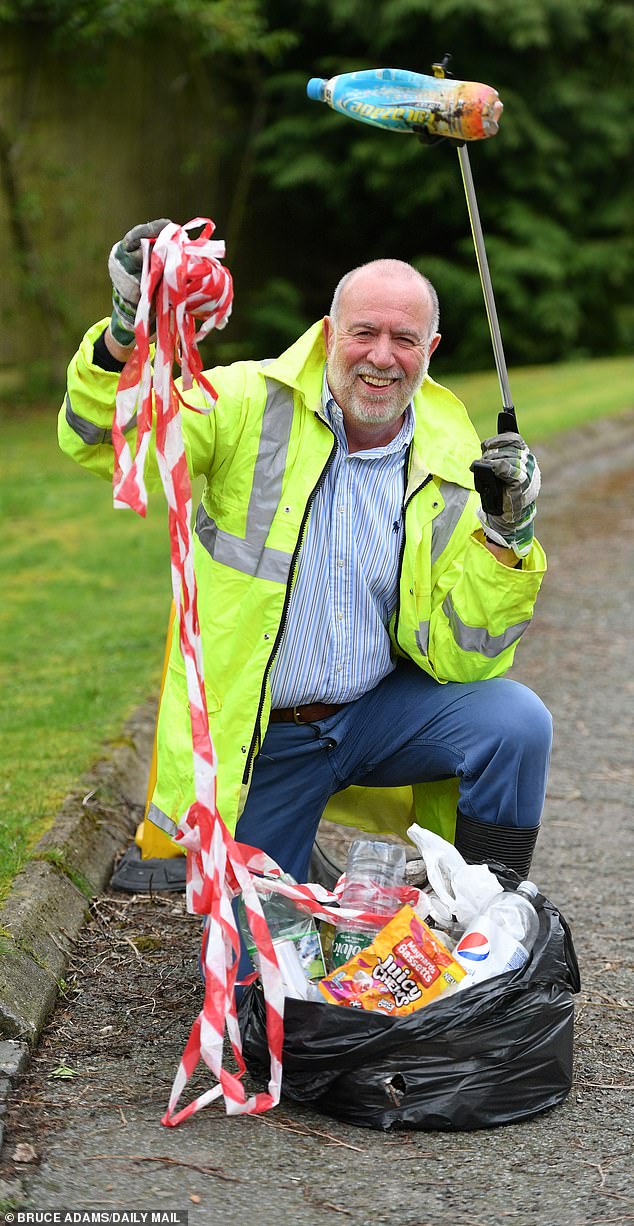 Ian Hudson, 66, organised a pick-up in Bishops Stortford, Hertfordshire, last year and will be holding another in March as part of The Great British Spring Clean.

‘We’re going to meet at the local football club and do a couple of the main roads that are pretty grotty,’ he says. ‘Part of the area we covered last time was the community hospital. I reckon we picked up about ten bags just from the car park.’

Art worker Owen Burton, 20, gathered together 12 members of his family to clean an area of Shoeburyness, on the Thames Estuary, last year and he says that he will be joining The Great British Spring Clean campaign this year, too.

‘Picking up litter is actually fun!’ he says. ‘I got my family involved as I didn’t want to do it alone. The Mail’s campaigns on this are brilliant.’

Last year, Jean-Louis Button incorporated litter-picking into his fitness regime, stopping to pick up rubbish every time he went running in Bletchley in Milton Keynes.

The 26-year-old says: ‘The campaign definitely helps. It motivates people.’

David Rawle, 67, organised a 20-man pick-up with Cranfield Tae Kwon Do Club last year and is keen to get behind this year’s campaign as well.

‘I can’t think of any reason why not!’ he says. ‘I know a lot of people who couldn’t make it last time — they would certainly join us.

‘We found the usual things — crisp packets, rusty bottles — and then more unusual items such as a chair and half a motorbike.’ 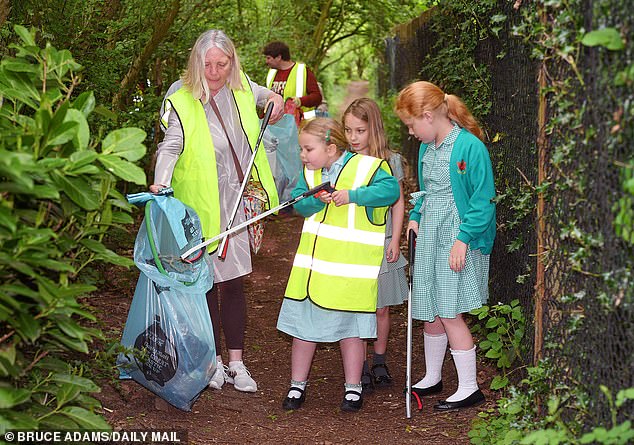 ‘Tiny microparticles of plastic are part of the sea now and affect everything that comes out of it, anywhere,’ she says.

Property developers Steven and Carolyn Sparks recruited 22 volunteers for a litter-pick on the south side of Lewes last year and are joining The Great British Spring Clean crusade this year.

‘With local authority cutbacks, there are fewer litter bins in Lewes,’ says Steven, 50.

Angie Cheshire, a retired secretary from Uffculme in Devon, is excited about getting her village involved.

‘We want our shops to stop selling single-use plastics — we don’t want them in the village,’ says the 71-year-old.

Former teacher Paul Bridgewater has continued to collect litter since the Mail’s Great Plastic Pick Up.

The 67-year-old from Portway says: ‘It’s difficult to measure the impact of last year’s clean- up because it seems to be an ongoing problem in my rural area.

‘As a result, I have continued with my weekly litter pick on Fridays.’

‘We would love to be involved again with the upcoming campaign,’ she says. ‘The girls use the beaches a lot, so it’s great to get them caring more and thinking more about how to look after the area.’