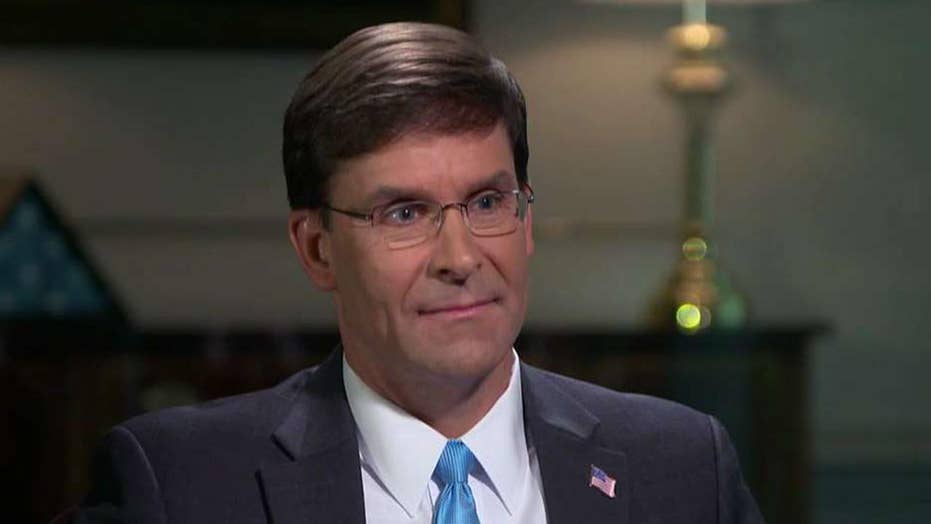 Defense Secretary Mark Esper sits down with Fox News national security correspondent Jennifer Griffin for his first interview since taking over at the Pentagon.

Iran on Monday announced that the 2.1 million barrels of crude aboard an Iranian oil tanker pursued by the U.S. has been sold to an unnamed buyer as the ship, at the center of a crisis roiling the region, continued its voyage in the Mediterranean Sea.

The announcement by government spokesman Ali Rabiei represent just the latest twist in the saga of the Adrian Darya 1, which had been known as the Grace 1 when authorities seized the vessel off Gibraltar on July 4, on suspicion of breaking European Union sanctions targeting Syria.

The seizure of the ship, and Iran's subsequent seizure of a British-flagged oil tanker, came amid heightened tensions between the U.S. and Iran over the collapse of Tehran's nuclear deal with world powers.

Speaking to journalists Monday in Tehran, Rabiei declined to name the oil's buyer, nor terms for the sale. At market rates, the crude oil aboard the Adrian Darya would be worth about $130 million. However, anyone buying it likely would be targeted by U.S. financial sanctions.

"The buyer of the oil decides where its destination is," Rabiei said, adding that the world is "witnessing the wrong policy by the U.S. in monitoring and intervention in others' internal affairs."

The Adrian Darya's detention and later release by Gibraltar have added fuel to the growing tensions between Washington and Tehran, after President Donald Trump unilaterally withdrew America from Iran's 2015 nuclear deal with world powers over a year ago over concerns about Iran's ballistic missile program and regional influence.

In the time since, Iran has lost billions of dollars in business deals allowed by the deal, as the U.S. re-imposed and escalated sanctions largely blocking Tehran from selling crude abroad, a crucial source of hard currency for the Islamic Republic.

The U.S. declared the Revolutionary Guard a foreign terrorist organization in April, the first time America named a military force of a nation as such, giving it the legal power to issue a warrant for the vessel's seizure. However, that would require another nation to acknowledge the writ.

The Adrian Darya initially put its intended destination as Kalamata, Greece, and later as Mersin, Turkey. The State Department has pressured nations not to aid the vessel.