Beirut: Iraq said on Thursday that its military has resumed operations with the US-led coalition against the Islamic State, after their joint mission was suspended amid calls for foreign troops to leave.

A statement from the office of Prime Minister Adel Abdul Mahdi said the missions have resumed in an attempt to maximise progress against the regrouping jihadists ahead of a new US-Iraqi agreement that could lead to a significant reduction of the US-led coalition's troops. 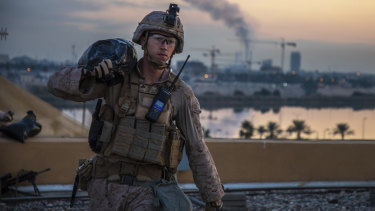 A US Marine carries a sand bag during the reinforcement of the US embassy compound in Baghdad, Iraq in January. Credit:AP

"In view of the continued activity of ISIS terrorist gangs in many regions of Iraq and for the purpose of exploiting the remaining time for the international alliance," Abdul Mahdi's office said, "it was decided to undertake joint actions that provide facilities for our forces."

Although Thursday's announcement did not come as a surprise, it underscored growing sensitivities surrounding the mostly US troop presence. While US and Iraqi officials have admitted in private that the resumption started weeks ago, in public they have either denied it or remained tight-lipped. 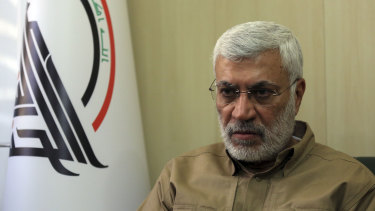 Abu Mahdi al-Muhandis a commander in the Popular Mobilisation Forces in Iraq. Credit:AP

Baghdad and Washington have tussled openly on the matter, and Abdul Mahdi's request that US diplomats provide a timetable for a full departure was dismissed out of hand by the Trump administration.

Abdul Mahdi is under increasing pressure to end, or at least renegotiate, the agreement that allows more than 5200 US troops to help fight the Islamic State's remnants in Iraq. Last week, as many as 200,000 Iraqis joined a march backed by an influential Shiite cleric to call for a US pullout.

Iranian-backed militia groups have also targeted US military and diplomatic installations, raising the cost of Washington's presence in Iraq for politicians back home.

But Western officials fear that a hasty drawdown might allow Islamic State fighters to rally. In parts of the territory the group once controlled, militants are now scrambling to reassert their presence, particularly in hard-to-govern spaces such as Iraq's desert and its no man's land between areas controlled by Kurdish and Iraqi forces.

In northeastern Syria, coalition operations against the Islamic State have also resumed in recent months, after they were significantly curtailed by a Turkish invasion there. Low-level attacks are common in villages and along roadsides. In cities such as Raqqa, captured militants claim that sleeper cells could be activated with a single phone call.

"The loss of their caliphate was huge, but it was never the end goal. The main goal was defeating the movement," said one Western official, speaking on the condition of anonymity because he was not authorised to discuss the situation with journalists.

"Taking our foot off the gas at this stage could birth a big problem in years to come," he said.

With that view increasingly common among Iraqi and Western officials, discussions over the coalition's role are ongoing. Options submitted to Abdul Mahdi's office include an expanded NATO presence, or a coalition without a US presence, according to local officials and diplomats. But other leading nations in the coalition have shown little appetite to stay in the event of a full US withdrawal.