Leo Varadkar has stoked the Brexit row by dismissing Boris Johnson’s claim the UK has made ‘fair and reasonable’ concessions.

The Irish PM said there had been no ‘real’ compromises from Britain and getting an agreement before a crunch summit next week will be ‘very difficult’.

The comments came as the leaders prepare for a crucial face-to-face meeting in Dublin in the coming days – with negotiations on life support.

Tensions threatened to spiral out of control yesterday when Mr Johnson had a brutal clash with Angela Merkel in a telephone call yesterday.

Downing Street briefed that the German Chancellor had told the PM that Northern Ireland had to stay in the EU’s customs union and aligned to its regulations ‘forever’.

A No10 source said that made the task of getting a deal ‘essentially impossible’, as the UK would never accept being divided. 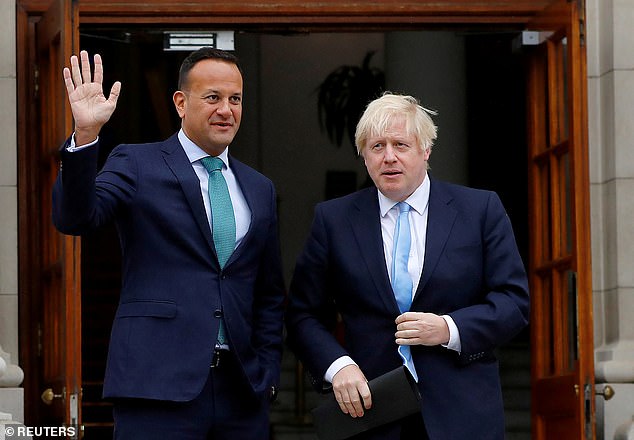 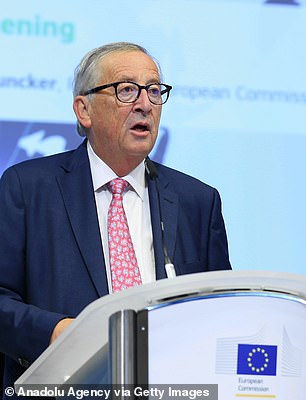 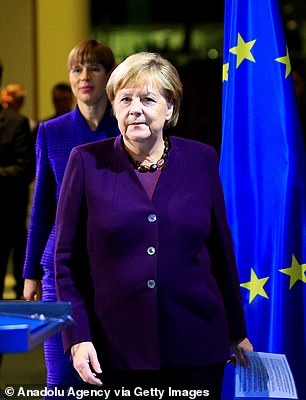 Jean-Claude Juncker (pictured in Brussels last month) has dismissed claims that the EU will be to blame for failure to get an agreement. No10 briefed that Angela Merkel (right in Berlin yesterday) warned Mr Johnson Northern Ireland must stay in the EU customs union ‘forever’

But in an interview, Mr Varadkar said Ireland and the EU would not accept an agreement at ‘any cost’.

‘There are some fundamental objectives that haven’t changed for the past three years and we need them guaranteed,’ he told RTE news.

What happens next in the Brexit crisis?

Here is how the coming weeks could pan out:

October 14: Parliament is due to return for the Queen’s Speech.

October 17-18: A crunch EU summit in Brussels, but Mr Johnson now seems certain to boycott the event in protest at the bloc’s intransigence.

October 19: If there is no Brexit deal by this date Remainer legislation obliges the PM to beg the EU for an extension to avoid No Deal.

Jeremy Corbyn has said that he will only let Mr Johnson trigger an election after an extension has been secured.

If there is a deal, it will start being rushed through Parliament immediately.

October 31: The current deadline for the UK to leave the EU.

‘I think it is going to be very difficult to secure an agreement by next week, quite frankly.

‘Essentially what the United Kingdom has done is repudiate the deal that we negotiated in good faith with Prime Minister (Theresa) May’s government over two years and sort of put half of that now back on the table and are saying, ”That’s a concession”.

‘And of course it isn’t really.’

Meanwhile, Jean-Claude Juncker has warned that No Deal Brexit will ‘lead to the collapse of the United Kingdom’ as the EU heaped pressure on Mr Johnson to bow to its demands.

The commission president dismissed suggestions that the bloc will be to blame for failure to get an agreement, jibing that Britain had committed the ‘original sin’ of trying to leave.

The intervention came amid claims the EU is considering offering the UK an extension lasting just weeks, rather than the three months that had been mooted.

Some member states want to deprive Mr Johnson of the time to hold an election, arguing that if he secures a majority it will put him in a stronger position.

Creating a No Deal ‘cliff edge’ could maximise the bloc’s leverage to force Mr Johnson into an humiliating climbdown.

Both sides are now desperately scrambling to find a way through the impasse, buit with little hope of success before a crunch summit next week.

Mr Johnson will hold face-to-face talks with Leo Varadkar in Dublin the coming days, but the Irish PM has accused him of only pretending to make concessions, saying it would be ‘very difficult’ to get a deal soon.

European Council president Donald Tusk ranted at Mr Johnson on Twitter yesterday in the wake of the row with Mrs Merkel, saying he was playing a ‘stupid blame game’ and risking the safety of citizens.

And in an interview in French newspaper Les Echos, Mr Juncker said it would be the UK’s fault if Brexit turned sour.

‘If that’s the case the explanation is actually in the British camp because the original sin is on the islands and not on the continent,’ he said.

‘A no-deal Brexit would lead to a collapse of the United Kingdom and a weakening of growth on the continent.’

Downing Street last night insisted that hopes of a deal were still alive.

But ministers were gloomy, and the PM’s official spokesman said negotiations were at a ‘critical juncture’.

Government sources said Mr Johnson could even boycott next week’s crunch EU summit rather than suffer a ritual humiliation of the kind dealt out to Theresa May.

The collapse of the talks would put Mr Johnson on a collision course over whether he can keep his ‘do or die’ pledge to leave the EU by the end of this month.

No10 sources said if Brexit was delayed again by Parliament and the courts, the Tories would have ‘no choice’ but to fight an election on a No Deal ticket to prevent votes haemorrhaging to Nigel Farage’s Brexit Party.

The clash with Mrs Merkel came as a major setback to Mr Johnson, who believed he had an understanding with EU leaders that they would engage positively with his compromise proposals.

The PM had hoped that Europe’s leading powerbroker would assist in breaking the deadlock, urging her to ‘help get this boat off the rocks’.

But Mrs Merkel told him he would have to settle his differences with Brussels and Ireland.

The PM’s spokesman said the two leaders had a ‘frank exchange’ – diplomatic code for a blazing row.

Mr Johnson is said to be furious that EU leaders have simply ‘banked’ his compromises – which include keeping Northern Ireland in the single market for goods – without offering any of their own.

Irish foreign minister Simon Coveney said: ‘I don’t think things have reached an impasse but there are certainly significant gaps to close.’ 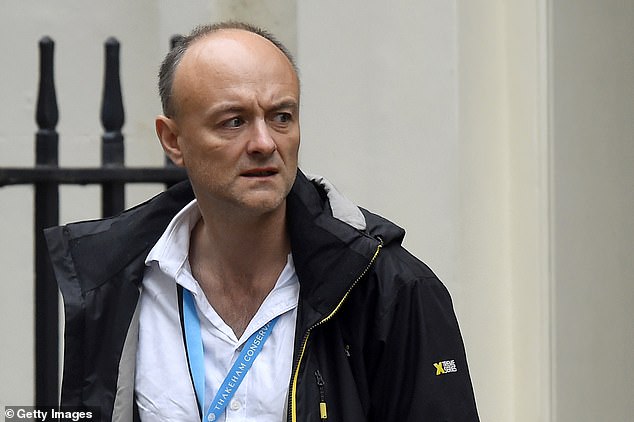