The attack came as one of Gaza’s larger armed factions, the Palestinian Islamic Jihad, threatened to retaliate after Israeli troops killed two of its leaders in the West Bank town of Jenin on Thursday.

‘In response to the rocket fired toward Israeli territory, IDF fighter jets targeted overnight (Sunday) a weapons manufacturing site belonging to the Hamas terrorist organisation,’ the Israeli military said in a statement.

The target was a site ‘where the majority of the organisation’s rockets in the Gaza Strip are being manufactured’, it added. 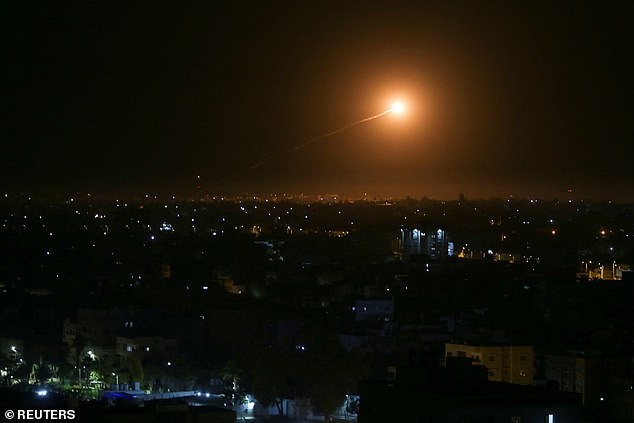 A rocket is fired from the Gaza Strip, in the early hours of this morning, December 4, 2022 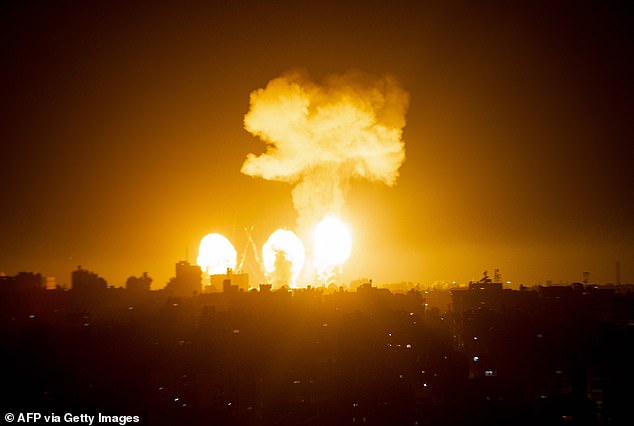 A ball of fire and a plume of smoke rise above buildings in the south of the City Strip as Israeli warplanes target the Palestinian enclave, early on December 4, 2022 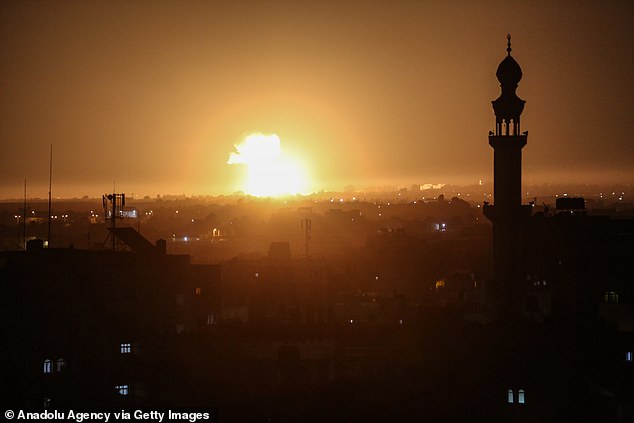 Smoke rises from Khan Younis following an Israeli bombardment in Gaza on December 04, 2022 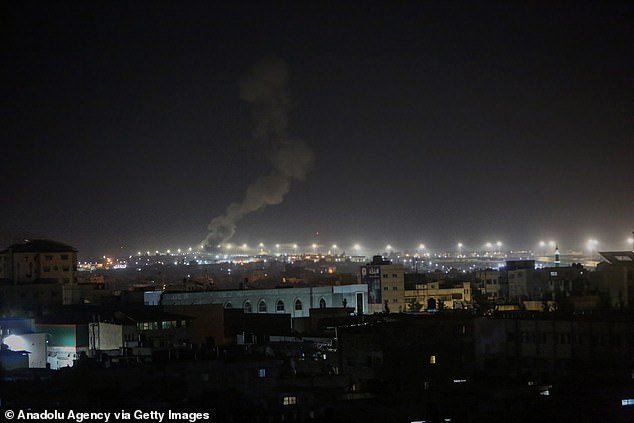 The Israeli military said the airstrikes targeted a weapons manufacturing facility and an underground tunnel belonging to Hamas, the militant group that has controlled Gaza since 2007.

The military said more projectiles were fired over the border while warplanes were hitting the Gaza sites.

No Palestinian group has claimed responsibility for the Saturday evening rocket, which landed in an open area near the Gaza-Israel fence.

The border has been quiet since August’s three-day blitz between Israel and the Palestinian Islamic Jihad, a powerful Gaza group that is smaller than the dominant Hamas.

At least 145 Palestinians and 26 Israelis have been killed in violence in Israel and the West Bank, including annexed east Jerusalem, this year, the heaviest toll since 2015.

In August, at least 49 Palestinians, including combatants but also civilians, were killed in three days of fighting between Israel and Palestinian militants in Gaza, which has been under Israeli blockade since 2007.

Hamas and other factions have largely honored the unofficial understandings that have kept the situation in the impoverished territory calm in exchange for thousands of Israeli work permits.

Israel and Egypt maintain a blockade on Gaza to prevent Hamas from stocking up weapons. 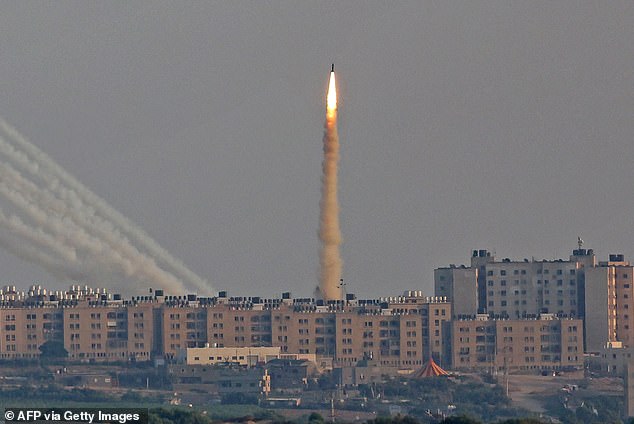 This picture taken from the southern Israeli city of Ashkelon shows Palestinian rockets fired from the Gaza Strip on August 7, 2022 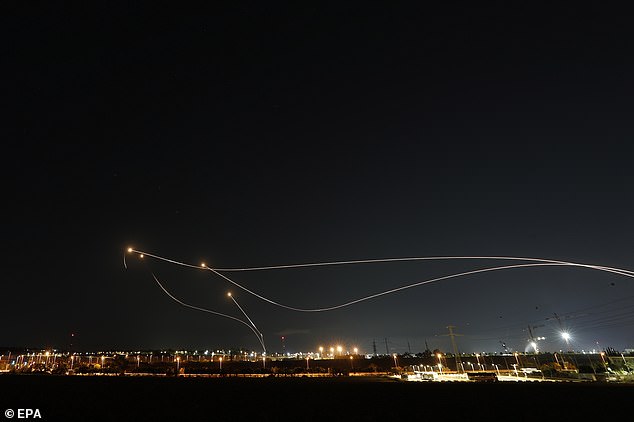 An Israeli Iron Dome air defense system intercepts a rocket fired from the Gaza Strip, by the armed wing of the Palestinian Islamic Jihad from the northern of the Gaza Strip, as seen from the Israeli side of the border, southern Israel, on August 7, 2022 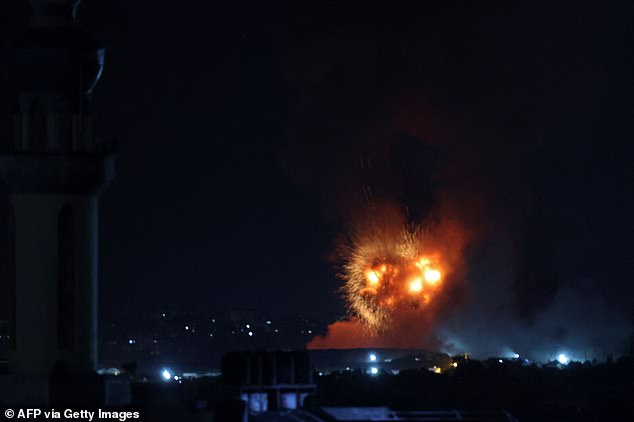 Flame and smoke rise from the site of an Israeli airstrike in Khan Yunis in the southern Gaza Strip on August 7, 2022 shortly before a ceasefire 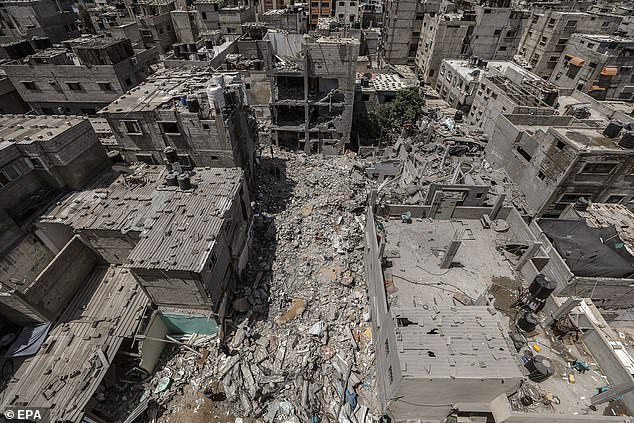 A view of destroyed houses after an Israeli air strike in Rafah town, Gaza Strip, on August 7, 2022 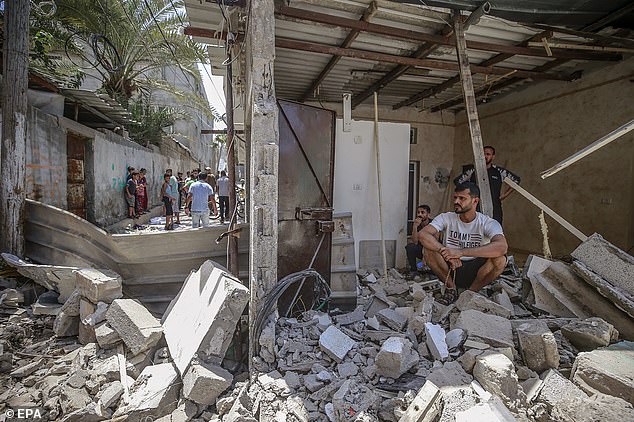 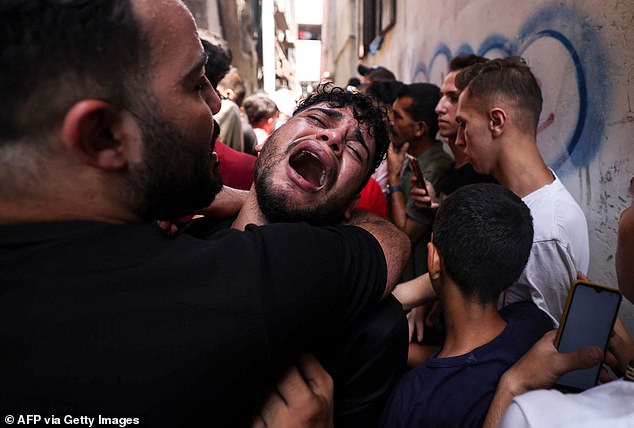 The friend of a young Palestinian killed during the night in the Jabalia refugee camp in the northern Gaza Strip, reacts during his funeral in the same camp, on August 7, 2022

‘The strike overnight continues the progress to impede the force build-up’ of Hamas, the Israeli army said.

Critics of the blockade say it is a form of collective punishment that harms Gaza’s 2.3 million people.

While Gaza remained quiet, tension has been boiling for months in the West Bank, where the Palestinian Authority exerts limited self-rule in parts of the territory.

Israel carried out near daily raids that it says targets wanted Palestinians involved in planning or taking part in attacks, prompted by a spate of Palestinian attacks on Israelis in the spring that killed 19 people.

The military says the raids are meant to dismantle militant networks and thwart future attacks, but the Palestinians say they entrench Israel’s open-ended occupation, now in its 56th year.

More than 140 Palestinians have been killed in Israeli-Palestinian fighting this year.

The Israeli army says most of the Palestinians killed have been militants.

But stone-throwing youths protesting Israeli army incursions and others not involved in confrontations have also been killed.

A surge in bloodshed in the occupied West Bank has sparked international criticism of the Israeli army for its use of lethal force against Palestinian civilians.

Criticism has focused on the killing of Ammar Hadi Mufleh, 22, in disputed circumstances in the West Bank town of Huwara, just south of Nablus, on Friday.