‘Save me and keep me from harm’: Israelis sing to keep their spirits up in a Tel Aviv bomb shelter as Hamas hit the city with hundreds of rockets in retaliation for strikes on Gaza

Footage has emerged of Israelis singing in a bomb shelter as fighting between the Jewish state and Hamas intensified today amid warnings of all-out war.

The video was taken in Tel Aviv overnight as the city was targeted by a barrage of hundreds of rockets fired from Gaza.

It shows a large group of people standing in what appears to be a basement car park being led in song by Shuli Rand, a well-known Jewish actor and musician.

The song he is singing is called Between Holiness and Secularity, and the lyrics that appear in the video translate as: ‘Please save me and please keep me from harm.’

What’s happening now in the Holy Land… A bomb shelter in Tel Aviv. 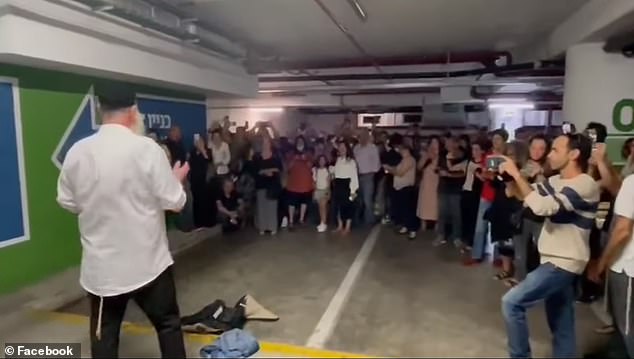 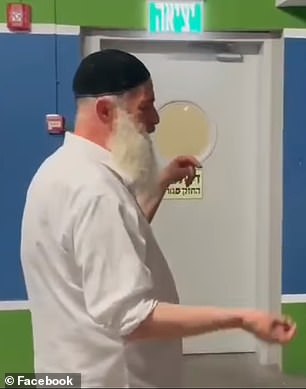 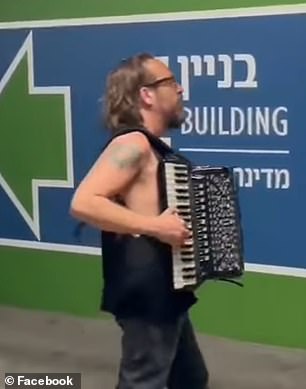 The man leading the song is actor and musician Shuli Rand (left), while the lyrics that can be heard in the video translate as: ‘Save me and keep me from harm’

The footage emerged amid the worst fighting between Israel and Hamas since the 2014 Gaza War, which left more than 2,000 people dead.

Rockets were first fired on Monday as Hamas carried out a threat to strike Israel unless it withdrew security forces from the Al-Aqsa mosque in Jerusalem after days of clashes with Palestinian protesters there.

Since then, Hamas says it has fired more than 1,000 rockets at Israel with the bombardment continuing today – while Israel has carried out dozens of missile strikes of its own.

At least 48 Palestinians, including 14 children and three women, have died in the strikes so far, according to the Health Ministry, with hundreds more wounded.

Six Israelis, including three women and a child, have been killed by rocket fire with dozens more hurt.

Tel Aviv found itself targeted overnight as Hamas said 210 rockets had been fired at the city, which is Israel’s most-populous.

The strike was in retaliation for a multi-storey block of apartments that was blown up in Gaza, Hamas said.

Israel said the tower block housed an office used by Hamas leadership, and that residents had been told to evacuate before it was hit.

Also overnight, rioting broke out inside Israel itself as Israeli Arabs clashed with police in the city of Lod.

Heavy clashes broke out following the funeral of an Arab man who was killed the previous night, the suspect a Jewish gunman.

Israeli media reported that the crowd fought with police, and set a synagogue and some 30 vehicles on fire.

Then, in the early hours of Wednesday, a rocket fired from Gaza landed in Lod killing an Israeli Arab man and his daughter – identified locally as 16-year-old Nadin Awad.

Her cousin, Ahmad Ismail, told public broadcaster Kan that he was near Nadin when she was killed alongside her father Khalil Awad, 52.

‘I was at home, we heard the noise of the rocket. It happened so quickly. Even if we had wanted to run somewhere, we don’t have a safe room,’ Ismail told Kan. 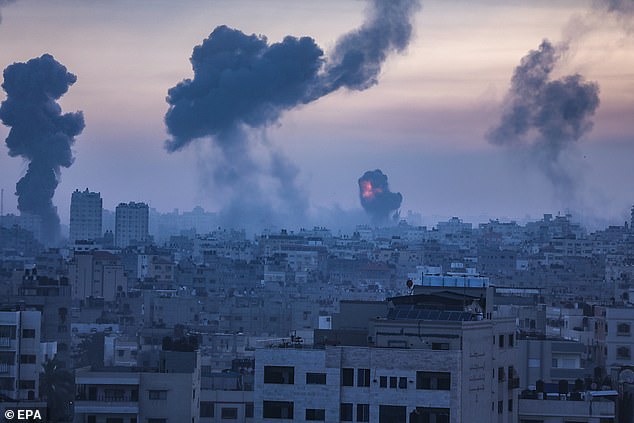 The Israeli President Reuven Rivlin described it as a ‘pogrom’ carried out by a ‘bloodthirsty Arab mob,’ after Netanyahu declared a state of emergency in the mixed Jewish-Arab city.

Netanhayu made a pre-dawn tour of the city to declare a state of emergency.

‘We will not tolerate this; we need to restore calm,’ Netanyahu said in Lod. ‘If this isn’t an emergency situation, I don’t know what is. We are talking about life and death here.’

The United Nations has warned the two sides they risk a ‘full-scale war’ if there is not an urgent ceasefire.

‘Stop the fire immediately. We’re escalating towards a full-scale war. Leaders on all sides have to take the responsibility of de-escalation,’ Tor Wennesland UN Special Envoy to the Middle East tweeted.