The day had finally arrived.

The day that hundreds, sometimes thousands, of “freedom” demonstrators said would put the state under the thumb of a dictator; the day the Andrews government’s controversial pandemic legislation passed Parliament and became entrenched in law. 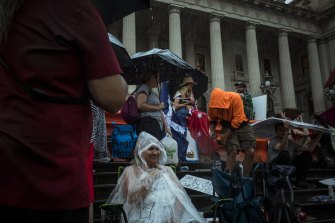 But as the bill was debated and voted on by MPs on Thursday morning, perhaps sensing defeat, the tone of demonstrators at Spring Street softened.

“These draconian laws … are hopefully not passed, but it seems like they’re going to be,” Caulfield crystal seller Kaalii Cargill, who goes by the name of Qi, said while pacing the steps of Parliament House on Thursday.

“We’re here to ‘kill the bill’ and if that doesn’t happen, we’re all starting to feel a bit deflated, we’re not going anywhere.”

Speaking to about 90 people on a live stream, Qi couldn’t understand where the groundswell of support had gone. During a brief interview, she spoke to a man who couldn’t abide the “crap” anymore. He pleaded with friends and family to come to Parliament. 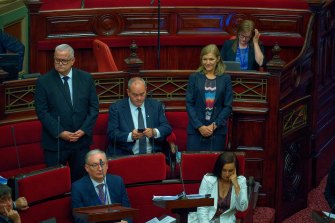 Crossbenchers Fiona Patten and Rod Barton vote in favour of the pandemic bill in the upper house on Thursday.Credit:Luis Enrique Ascui

“They’re about to announce the bill,” he said, tears in his eyes and voice shaking, “let’s hope it doesn’t go through.

By the afternoon, facing about a dozen police standing in front of Parliament House, the protesters chanted “cross the floor” and “we say no” as the bill was debated, and passed, by upper house MPs.

But rather than an outpouring of grief, demonstrators just seemed exhausted. 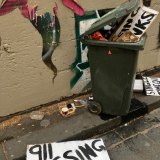 Protesters dispose of signs near Parliament House after the pandemic legislation passes.Credit:Michael Bourke

"This kind of news can be quite devastating," said Tami Jane.

“I just saw one of the freedom fighters walking past crying, he was pretty upset about it … It’s a very sad day really for Victoria. It feels like the end of democracy here.”

A few dozen protesters began a chant of “we will not comply” which quickly ceased. Someone aimlessly strummed at guitar strings.

Two weeks ago it was a different story. Peaceful protests were replaced by calls for violence. Demonstrators threatened and maligned police.

They berated veteran 7 News reporter Nick McCallum and ejected him from the crowd as he attempted to do short interviews.

Some rolled out the gallows and called for public hangings of members of parliament. Sitting Liberal Party MPs mixed in the crowd.

The leaders of the movement, usually there to rally the crowd, were nowhere to be seen.

Wobbly the Wizard, a staunch critic of the Andrews government, had taken his faithful black labrador home and returned to Kilsyth.

The anger, palpable just two weeks ago, had been replaced by a mourning.

“This is one of the most historic days in terms of a humanitarian disaster,” Qi said.

“I still don’t quite know why there’s not hundreds of thousands standing with us.”

The guitarist took to the microphone and sang “Mad World” to a group of despondent protesters. Heavy cloud rolled in, plunged the city into darkness and blanketed Parliament in rain.