Milan:  On the sixth floor of a skyscraper, two dozen epidemiologists and public health experts form the nerve centre of the effort to contain a coronavirus outbreak in Italy that has alarmed Europe and put the wealthy Lombardy region at the centre of global concern.

They work the phones, pore over digital maps and study computer screens. They update databases with confirmed cases. They track those whom infected people might have had contact with. They coordinate with hospitals and laboratories to verify test results, sometimes for people with no symptoms. 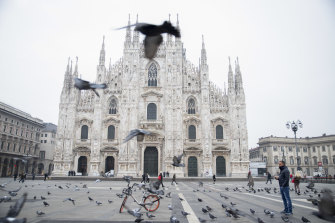 Milan’s Piazza del Duomo is normally packed with residents and tourists but the effects of coronavirus are being felt. Credit:Bloomberg

"Italy is a safe place," Prime Minister Giuseppe Conte, a rival of Lombardy politicians who has himself faced intense criticism for the government's handling of the virus, asserted defensively this week, "maybe safer than others."

There is no doubt that Italy is confronting a significant outbreak. But beneath the political squabbling is a deeper dispute over whether Lombardy's response has made the problem appear worse than it is.

The central government argues that other regions within Italy and other countries have respected global guidelines by focusing tests on people showing symptoms of the virus.

But according to the Health Ministry, Lombardy has also carried out swab tests on people who are more likely to have come into contact with infected people, even if they have no symptoms themselves.

Experts at the World Health Organisation and Italy's Health Ministry said it was possible that Lombardy had created an inflated perception of the threat by including in case totals people who tested positive for the virus but who had not gotten sick. But many scientists say that attempting to track even mild cases of the virus is essential to containing its spread.

On Thursday, after insisting that their comprehensive approach to testing was the right one, Lombardy said it would now conform with national and international guidelines and test only people showing symptoms.

But the numbers tallied in Lombardy's approach have already made Italy a focus of international concern.

Not everyone who contracts the virus gets sick, a fact that is proving a quandary for scientists and officials trying to formulate a measured response. 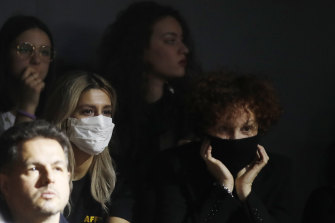 Walter Ricciardi, an Italian member of the executive council of the World Health Organisation who was recently named councillor of the Italian Health Ministry, said that only a small percentage of people who contracted the virus were infected by people showing no symptoms who did not know they were carriers.

Top Italian medical officials warned that while it was possible that asymptomatic people might be less contagious because, for instance, they cough less, very little is known about the new virus and how it behaves. "Evidence is lacking," said Giovanni Rezza, the head of epidemiology at the leading scientific organisation of Italy's National Health Service.

Lombardy officials said they preferred to know who had the virus. "Either you hide problems under a carpet, or you lift the carpet and you clean the floor," Attilio Fontana, the region's president, said in an interview in his office, with views over a foggy and eerily quiet Milan, 29 floors above the virus hunters.

Fontana is a leading member of the League party, led by the nationalist Matteo Salvini, who has not been shy about leveraging the crisis to pursue his aim of bringing down Conte's government. Salvini has argued in recent days that Conte had fumbled the response to the crisis and needed to be replaced.

Fontana said he disagreed with Conte's "way of dealing with the crisis." The region's tests were necessary, he argued, suggesting that if other places tested as rigorously, they would find more cases, too.  Numbers were high in Italy, he added, "because we do a lot of checks."

In Milan's central train station this week, people were eager to leave the city.

Donatella Monti and her children waited for a train back to Rome, all of them wearing masks bought in a hardware store.

Monti said many in Lombardy seemed unfazed by the outbreak, but that her pediatrician back south advised her to keep her young daughter away from school for 10 days. "I'll go to school with my mask on!" her daughter protested.

In Fontana's office, his aides quipped that the masks "didn't do a thing" to stop the virus and that the Milanese only wore masks during carnival.

But late Wednesday, Fontana posted a video on Facebook in which he explained that one of his aides had tested positive for the virus. The governor said that he himself had tested negative, but that he would nonetheless "live in a sort of auto-isolation" for the next two weeks, avoiding public events and news conferences and wearing a mask in the office. "So when you see me in the coming days, I will be like this," he said, pulling a green mask over his face. "Don't be scared. It's always me."