Jamie Oliver’s flagship London Italian restaurant has been cleared out by bailiffs today after the business went into administration.

The celebrity chef’s beleaguered chain Jamie’s Italian has debts of £71.5million and workers were seen today removing valuables from the eaterie near Piccadilly Circus.

Bailiffs were seen loading tables and chairs into a lorry outside the restaurant, which opened in 2014, with furniture piled up inside the vehicle.

The administration has put 1,300 jobs at risk and Oliver was forced to close 22 of his 25 sites immediately.

The 43-year-old, who has netted £240 million during 20 years in the public eye, said he was ‘devastated’ and ‘deeply saddened by the outcome’ in a statement.

He thanked staff and suppliers, adding: ‘I appreciate how difficult this is for everyone affected. It’s been a real pleasure serving you.’

But many of his staff were left upset after turning up for their shifts only to find restaurants were shut, with notices left on doors and windows.

It took the team of bailiffs four hours to clear the site of valuable assets, with kitchen equipment, machinery and even an orange scooter among the items removed. 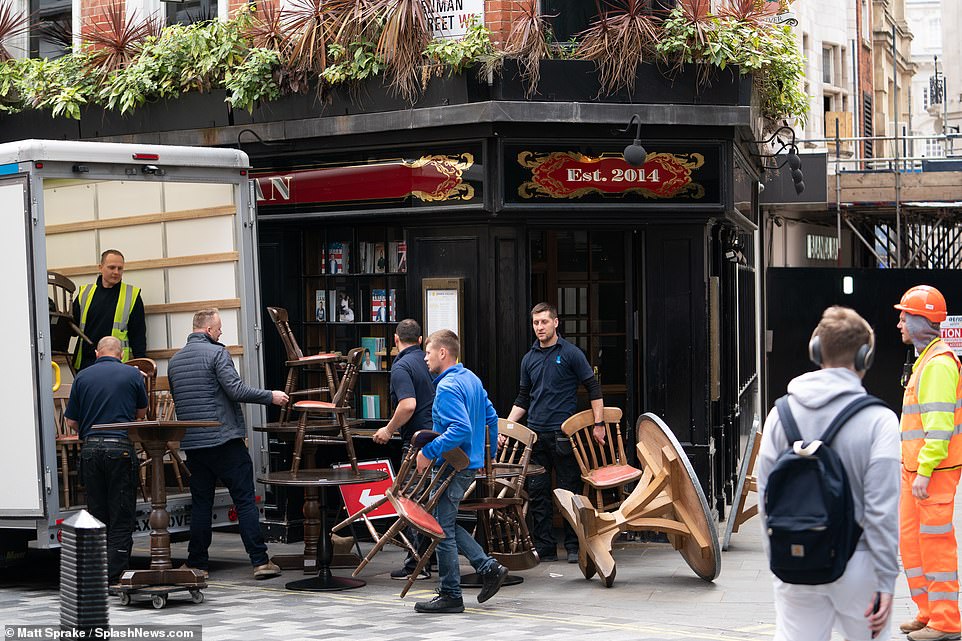 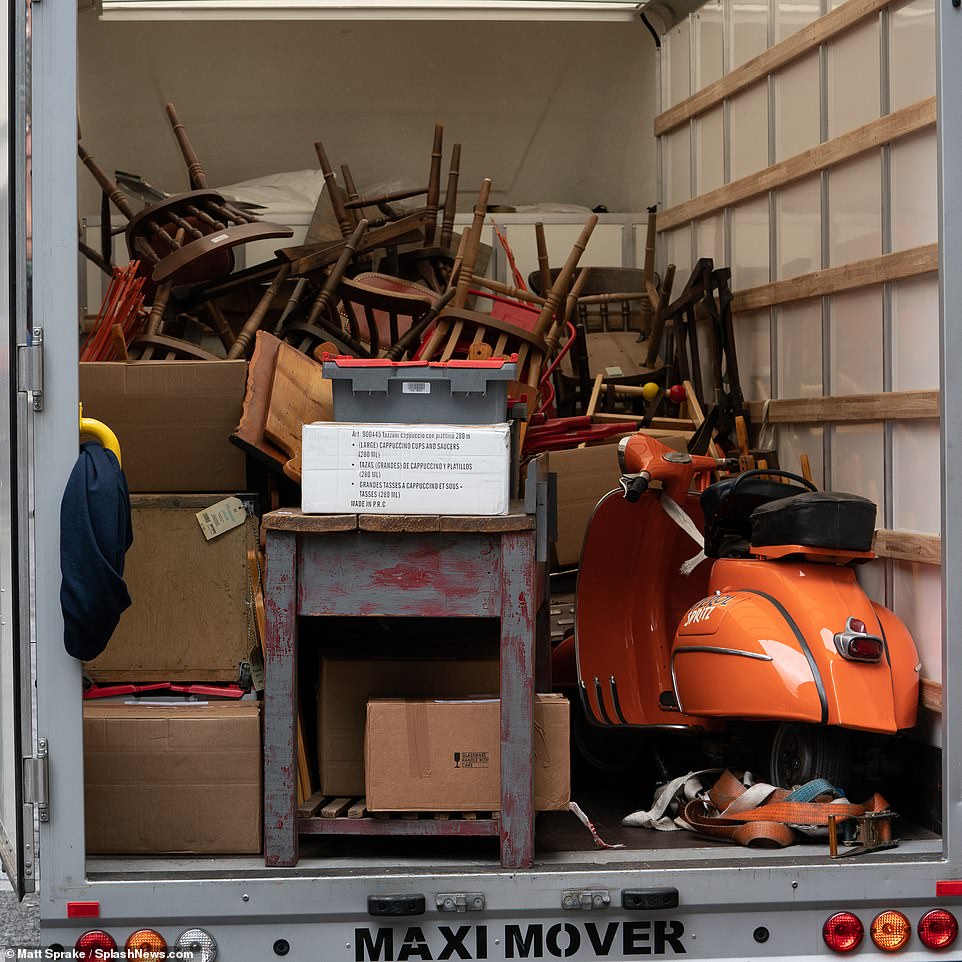 Among the assorted items taken away from the central London restaurant was an orange scooter, pictured right 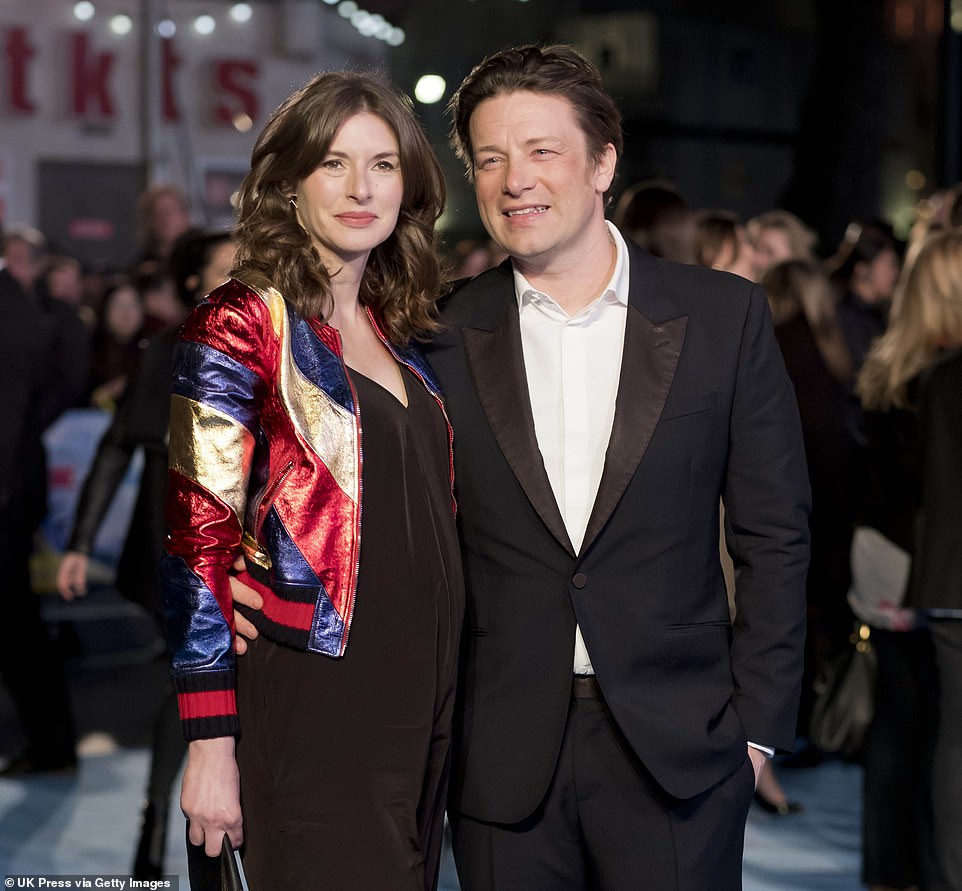 Oliver, pictured with wife Jools, has netted £240 million during 20 years in the public eye but said he was ‘devastated’ and ‘deeply saddened by the outcome’ 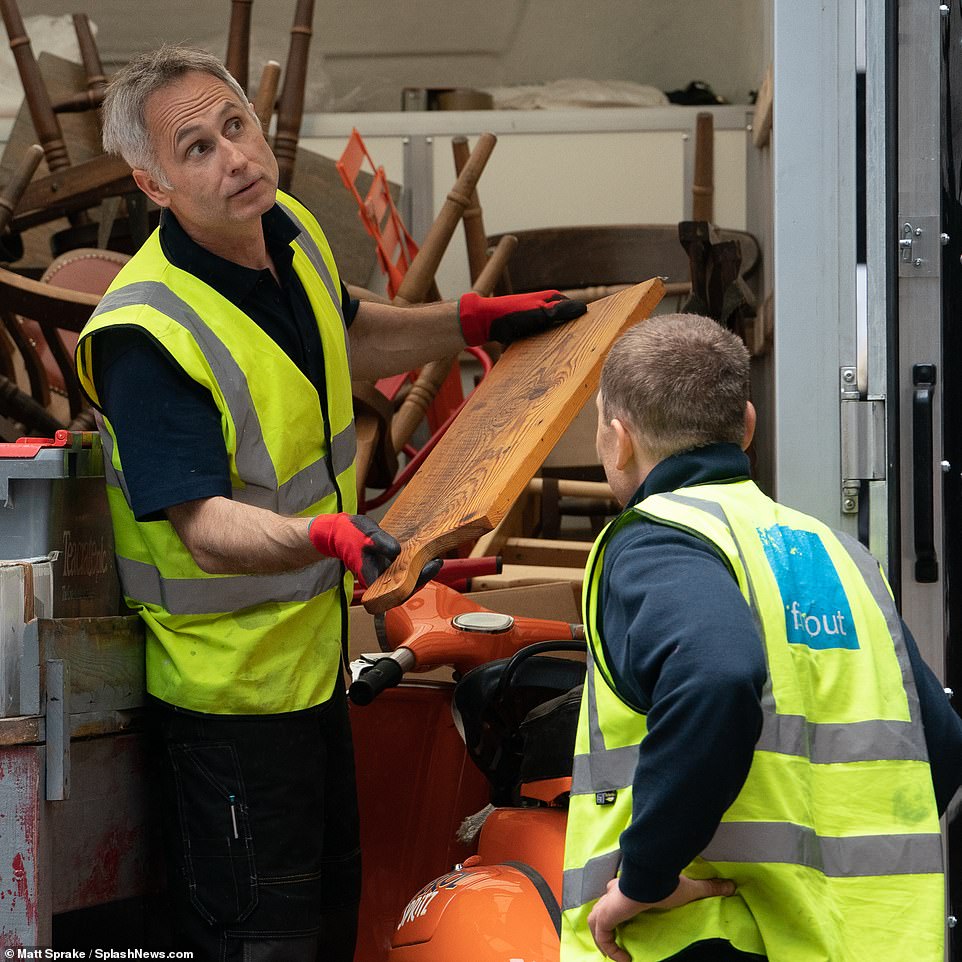 Bailiffs wearing reflective jackets were seen carefully loading various pieces of furniture and cooking equipment, including this chopping board, pictured, into a lorry 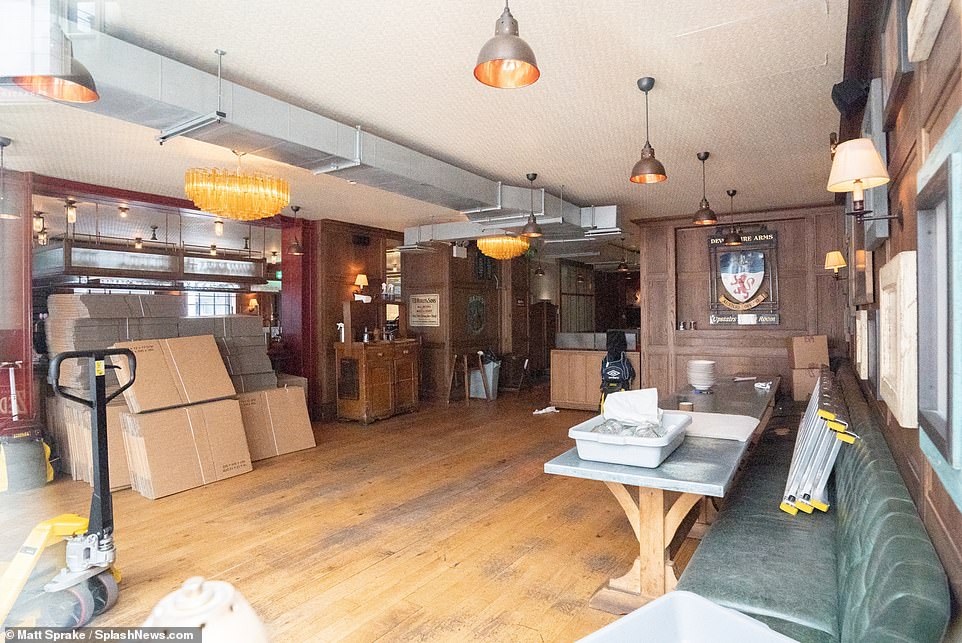 Photos of the interior of the restaurant, pictured, show how furniture had been deconstructed and piled up against walls as the once thriving business began to be emptied 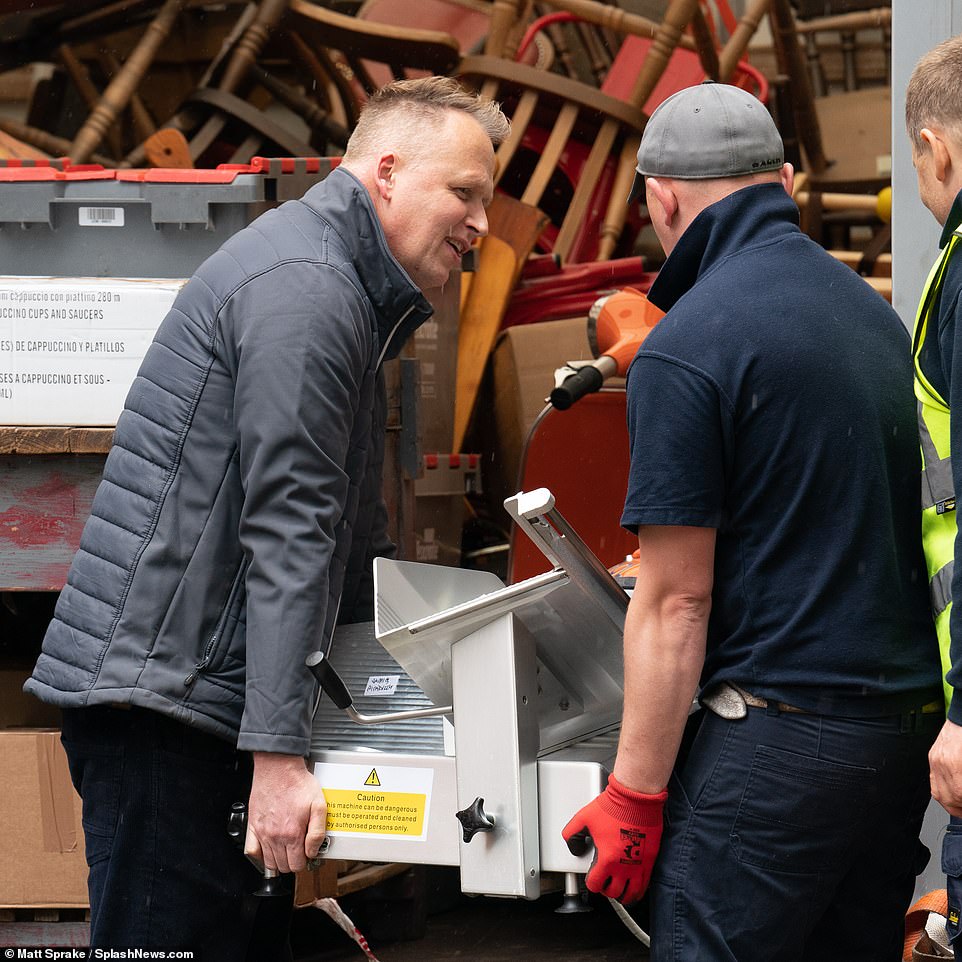 Other workers teamed up to carry heavy pieces of kitchen machinery, pictured, out of the London eaterie and into the vehicle 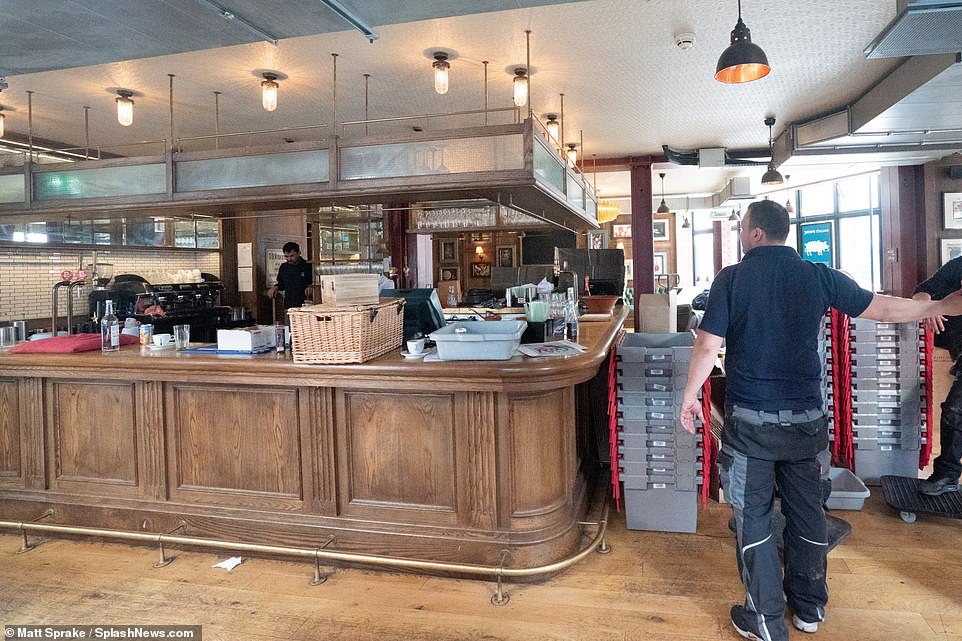 Bailiffs brought in dozens of plastic crates, pictured, to pile up items from the bars and kitchens including cutlery and glassware

The crumbling chain was also beset by a tide of poor reviews, including from restaurant critic Marina O’Loughlin who in 2018 said she would have to be ‘paid to go back’ to his restaurant in Westfield London.

2015: Jamie At Home, which contracted agents to sell his cookware range at parties, ceased trading after racking up losses. The company began in 2009, as part of the Jamie Oliver organisation, before being licensed to another firm in 2013, but shut up shop in 2015.

Chain was struggling with debts of £71.5m and teetered on the edge of bankruptcy before the chef injected his savings into the business.

The firm also took out £37m in loans from HSBC and other companies.

In 2017 he closed the last of his four his Union Jack Piazzas, in London’s Covent Garden.

2018: Jamie’s Italian shuttered 12 of its 37 sites, with the latter tranche executed through a Company Voluntary Arrangement (CVA).

He also came under fire for failing to pay suppliers after his upmarket steak restaurant Barbecoa crashed into administration, leading to the closure of its Piccadilly branch.

The restaurant in St Paul’s continued to trade and was bought out by a new company set up by Oliver, who was no longer legally liable for the debts.

2019: All but three of Jamie Oliver’s restaurants close after the business called in administrators, with 1,300 staff facing redundancy.

The chef himself previously blamed his empire’s parlous state on Brexit, which he said was among the factors which caused a ‘perfect storm’, as well as rental costs, local government rates and the increase in the minimum wage.

In 2017 the father-of-five, who lives in a £6million 16th century Essex mansion, ploughed £12.7million of his own money into his struggling business after being given two hours to save the chain.

According to Companies House, Jamie Oliver Holdings Ltd – the umbrella company under which he runs his myriad businesses – turned over £32 million last year – a staggering £87,670 a day.

But Jamie’s Italian was on the brink of collapse two years ago with the chef revealing in an interview it had ‘simply run out of cash’ and run up millions in debt.

The business said it had appointed KPMG to oversee the process.

More than 1,300 jobs are understood to be at risk nationally from the collapse of the business, which also includes Oliver’s Barbecoa restaurant near St Paul’s Cathedral, and Fifteen London.

The process does not affect Mr Oliver’s other companies, which handle his media and licensing deals, while the international branch of Jamie’s Italian is also unaffected.

Fifteen Cornwall, which operates under a franchise, is also not involved.

It follows a hunt for a new investor in the Jamie’s Italian brand, with a number of private equity firms touted as mulling bids for a stake in the business.

Overseas, five branches of the Australian arm of Jamie’s Italian were sold off last year, while another was put into administration.

Oliver has built his vast fortune on TV and publishing deals, restaurant chains and product endorsement — both in the UK and Australia, where he fronts nutrition adverts for a supermarket.

Meanwhile it was revealed last weekend that fellow celebrity chef Gordon Ramsay had tried to help Oliver during his time of need.

The warring pair have long traded public insults – but Ramsay insisted it was all in good faith in the name of ‘banter’, and Oliver even added it was ‘good for PR’.

But they have since put aside their differences after Ramsay offered Oliver an olive branch. 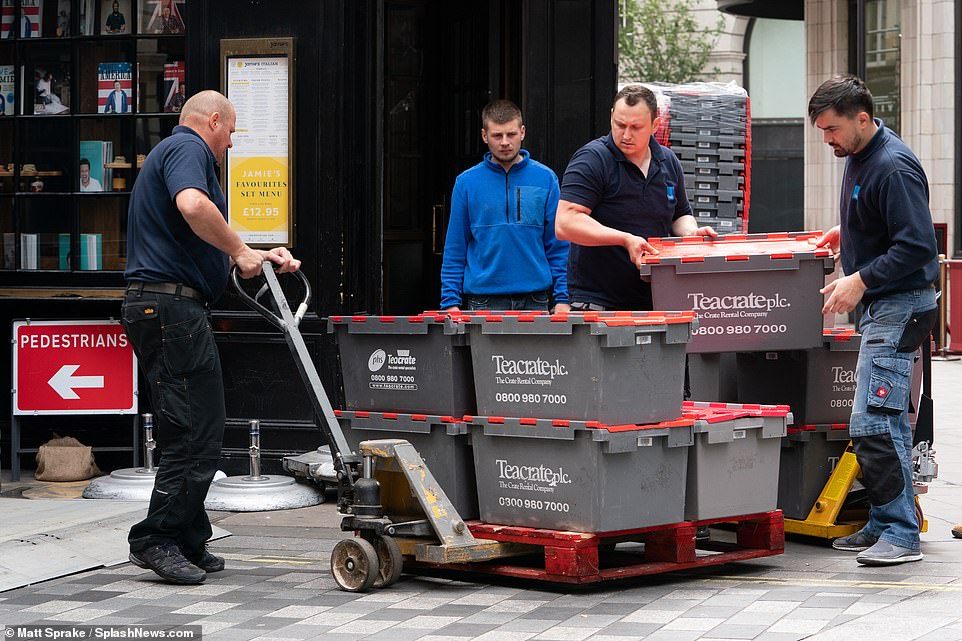 Some of the bailiffs had to use trolleys to load up cooking equipment and heavier items, pictured, taken from the eaterie 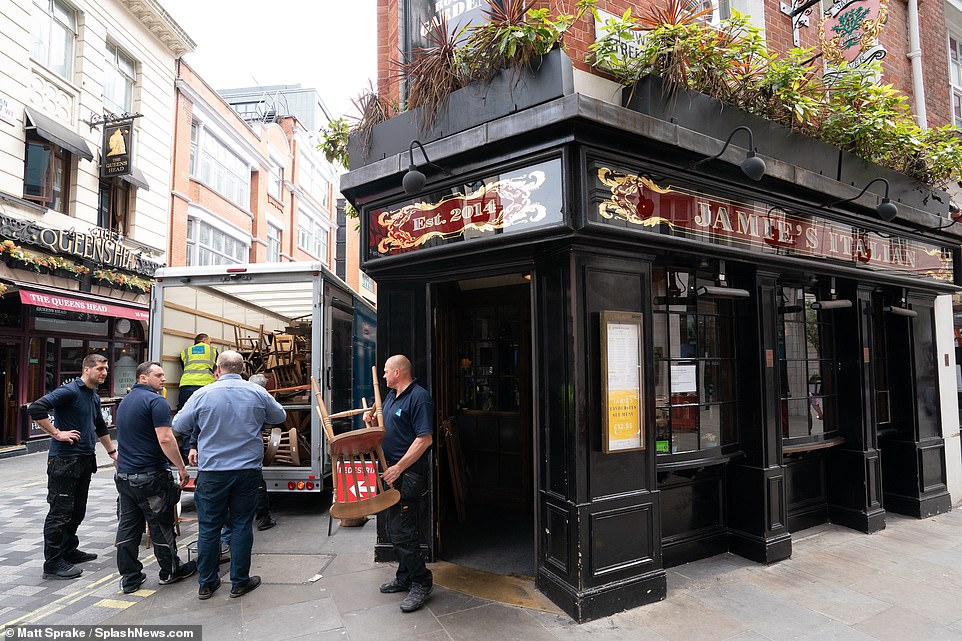 The restaurant, pictured, opened in 2014 and it took the team of bailiffs four hours to clear it of valuable assets 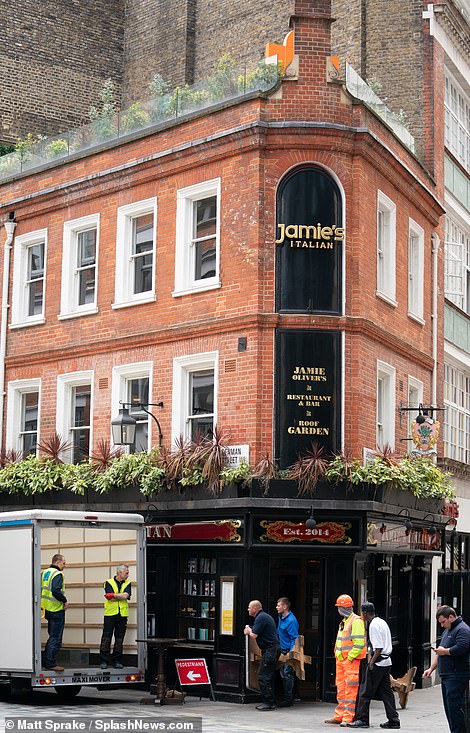 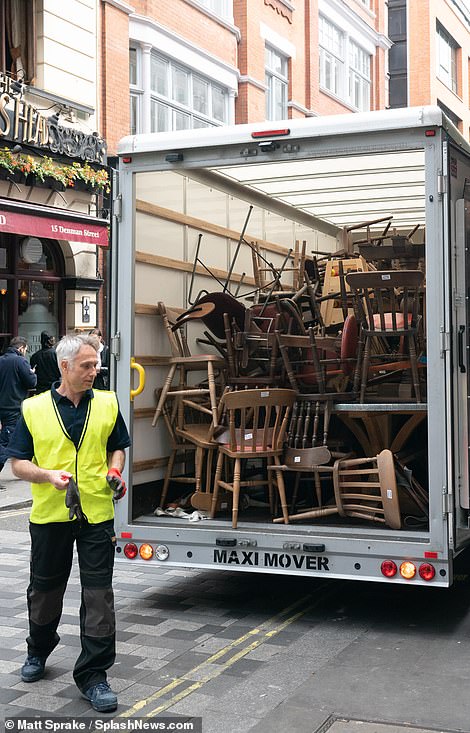 So far 22 of the 25 UK Jamie’s Italian restaurants have closed, including the flagship London branch, right, and around 1,300 jobs are at risk due to the administration. Pictured right is a lorry filled with wooden chairs and tables from the site 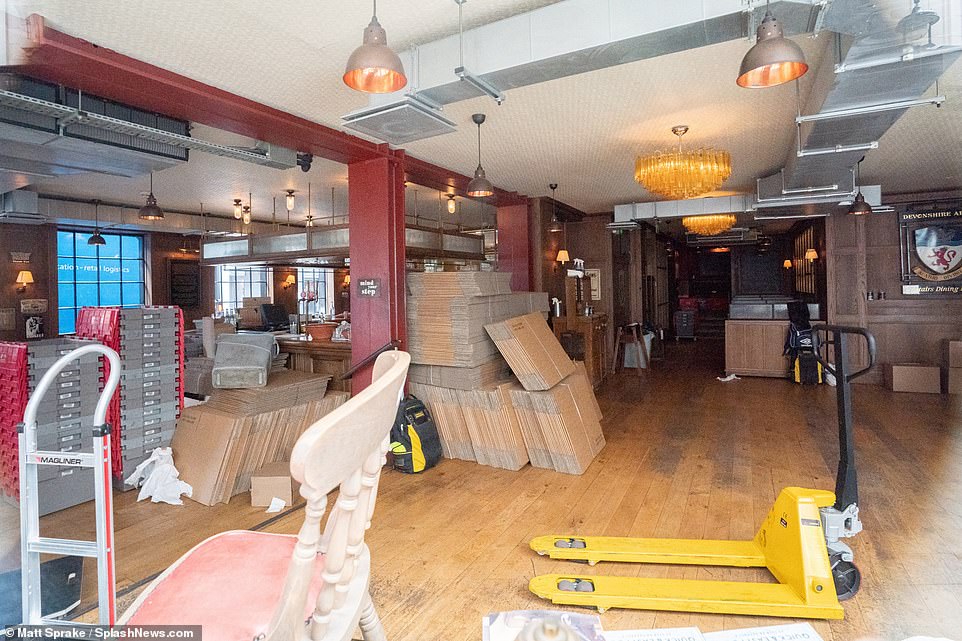 Overseas, five branches of the Australian arm of Jamie’s Italian were sold off last year, while another was put into administration. Pictured is a metal trolley inside the restaurant 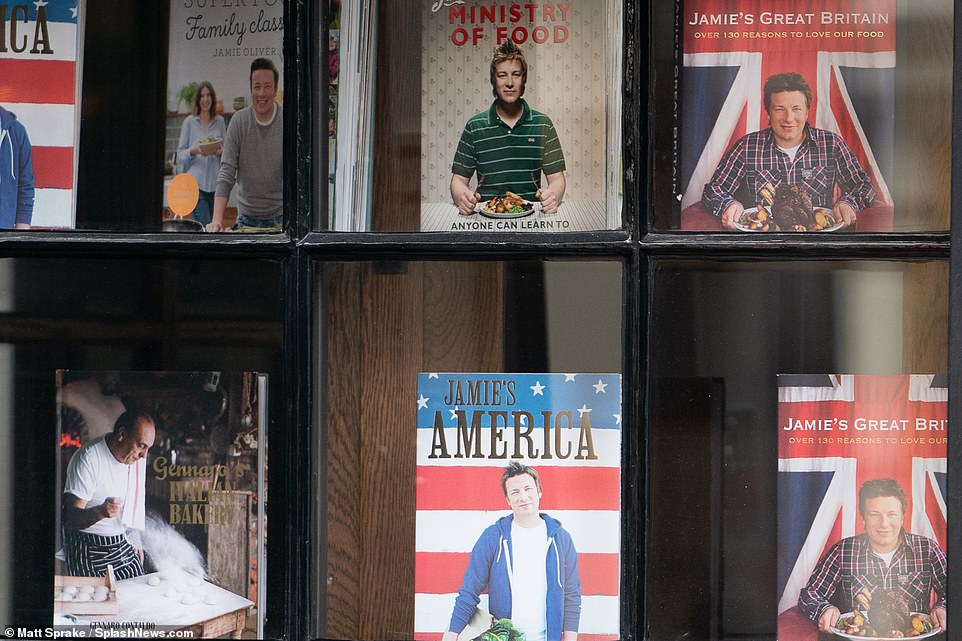 Some of Oliver’s cookbooks, pictured, could still be seen in the windows of the restaurant as bailiffs arrived today 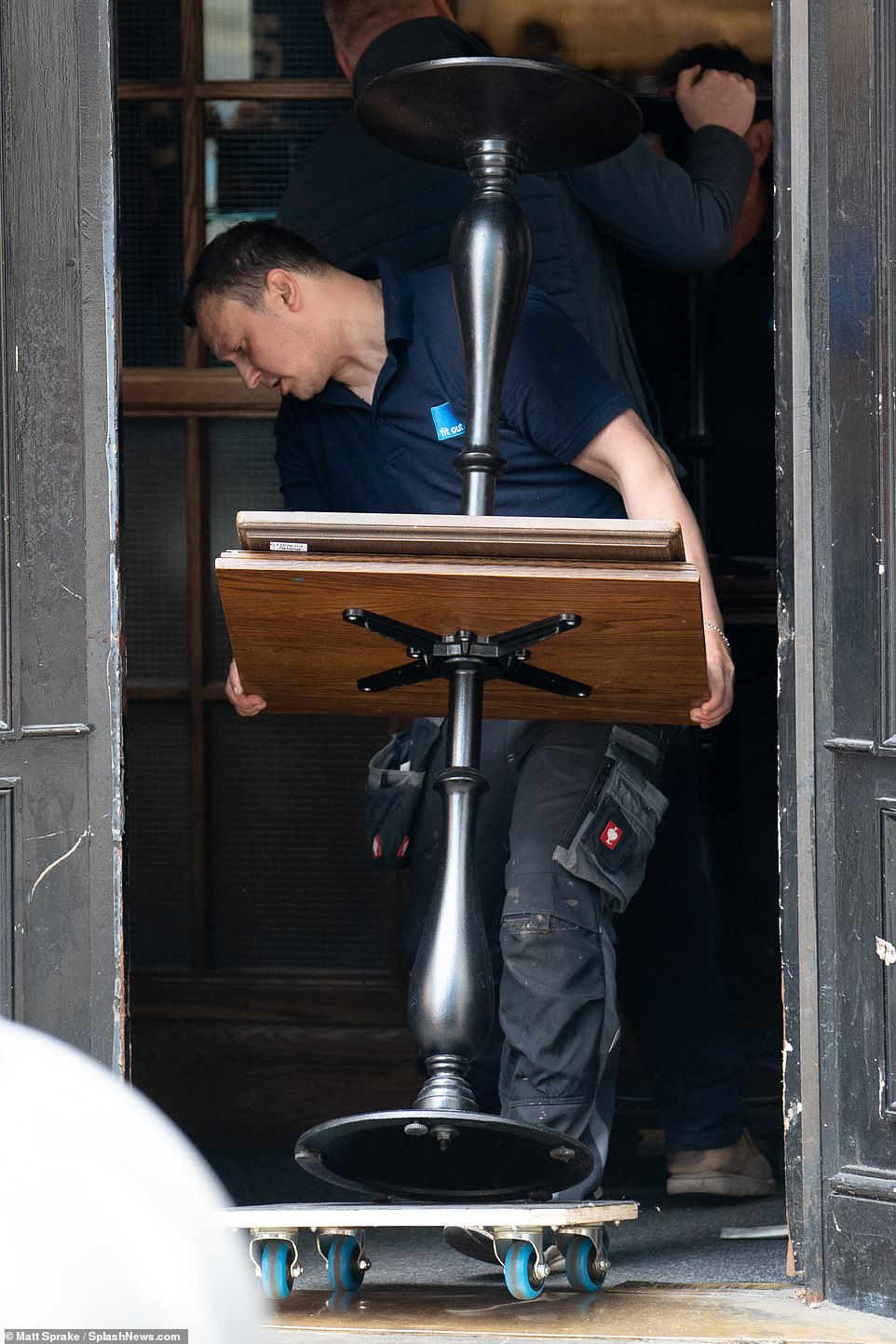 This worker found an inventive way of removing two tables, pictured, by stacking them on top of each other and using a trolley to wheel them outside 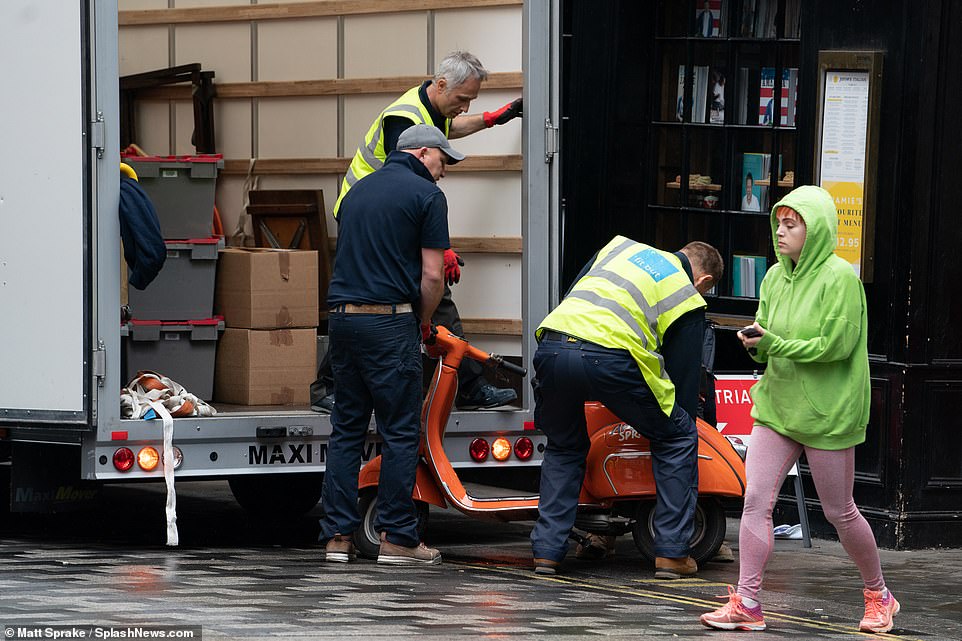 The scooter was one of the items the workers loaded into the lorry very carefully, pictured, with three needed to make sure it was lifted safely 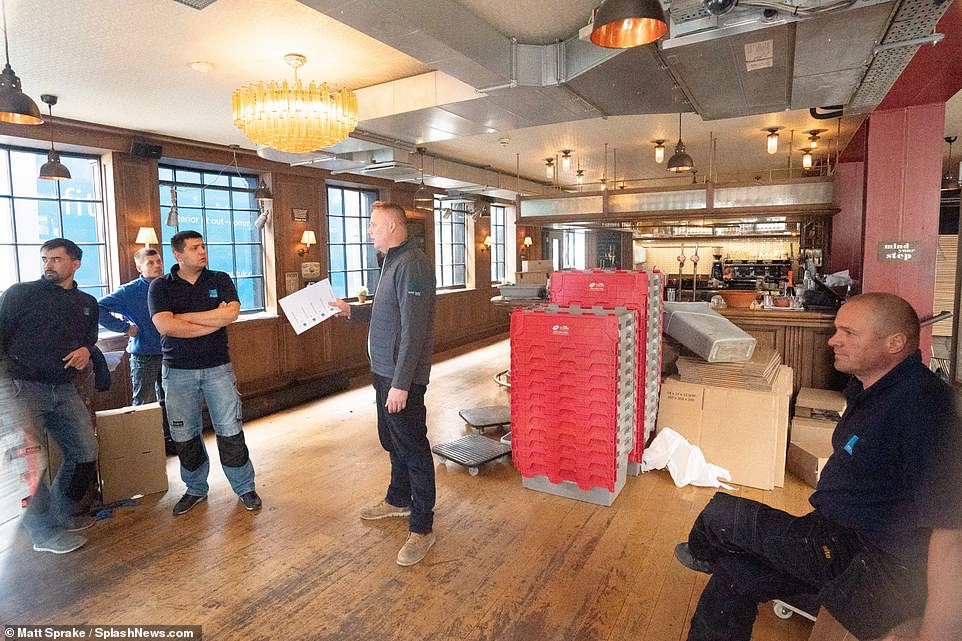