The former figurehead of Collingwood’s cheer squad has pleaded not guilty and will stand trial on charges he sexually abused a boy almost 17 years ago, after a court heard of discrepancies in the accuser’s early disclosures.

Jeffrey Corfe – known to AFL followers as “Joffa” and who for years was an ever-present figure at Magpies games – is accused of sexually abusing a 15-year-old boy in Coburg on January 29, 2005. 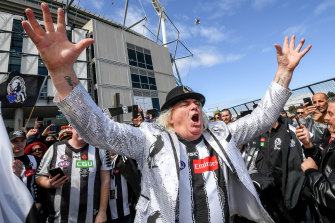 Mr Corfe, 61, on Wednesday pleaded not guilty to two charges of sexual penetration of a child under 16, at the end of a one-day online hearing in Melbourne Magistrates Court, during which the complainant gave evidence for about two hours while the court was closed to media, in keeping with all Victorian sex assault cases.

After the complainant’s evidence, the court heard there were discrepancies in his early accounts of where the alleged offending happened and the identity of the alleged perpetrator.

The complainant’s former partner said the accuser disclosed the alleged offending some time between 2017 and 2019 and initially said he was sexually abused by his brother’s friend.

But months later the complainant said “it was somebody else, that it was Joffa”, the former partner told the court.

The complainant identified Mr Corfe as the alleged perpetrator when he first went to police last year, the court heard.

Detective Senior Constable Anna Steele said the complainant had nominated to investigators two addresses in Coburg as the scene of the alleged abuse. The addresses are several streets apart.

She said he drew a sketch of where he walked from his home to the house. But by the time he made a second statement about six months later, he had nominated a different address.

“He was clear there was a spray-painted number on the front of the house,” the detective said.

She said that between making statements, the complainant “made his own inquiries” and was sure he found the right house.

Mr Corfe, who now lives near Ipswich in Queensland, watched the hearing from the Melbourne office of his barrister, Christopher Terry.

Magistrate Kieran Gilligan extended Mr Corfe’s bail. He will appear next year before the County Court for a directions hearing, when a date for his trial will be set.

Mr Corfe no longer has an association with Collingwood and there is no suggestion the club was involved in his alleged offending.