‘You won’t be laughing in September!’ Humiliated Corbyn rages that MPs may have blown their LAST chance to block No Deal after being torpedoed by his own side in Brexit vote

Jeremy Corbyn raged at the Tories after his attempt to hijack Parliamentary business to make No Deal illegal failed last night and he bellowed across the Commons: ‘You won’t be cheering in September’.

He was trying to block a new Prime Minister such as Boris Johnson taking Britain out of the EU on October 31 come what may.

The Labour and rebel Tory MPs wanted to seize control of the Commons agenda on June 25 so legislation could be rammed through tying the new PM’s hands.

But their bid was defeated by 309 votes to 298 after eight Labour MPs rebelled against their leader and voted with the Government, who also lost ten of their MPs to Mr Corbyn’s side.

As the result came an angry Mr Corbyn can be seen in the Commons with his arms folded and was then heard shouting across the Commons: ‘You won’t be cheering in September’.

His terse taunt could be because he believes that No Deal now cannot be stopped – or that he is hopeful that Speaker John Bercow will help them try again when the new PM starts work after the summer recess.

Tory ex-minister Sir Oliver Letwin, who was also behind the cross-party attempts to block No Deal, said today that he believes there may be no more opportunities for Parliament to intervene. 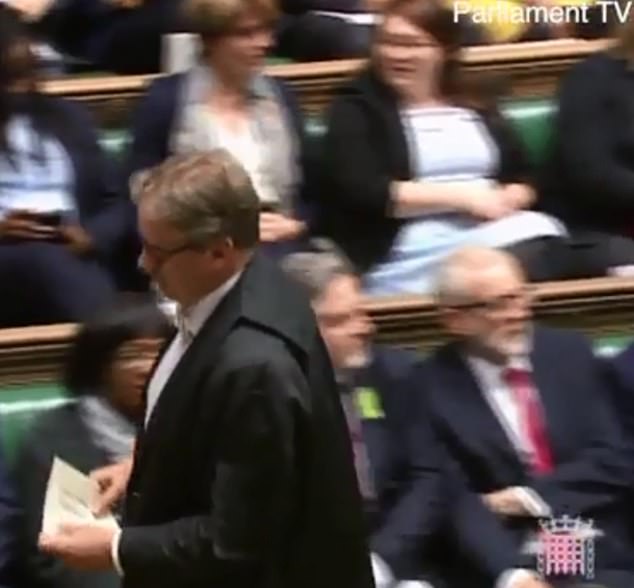 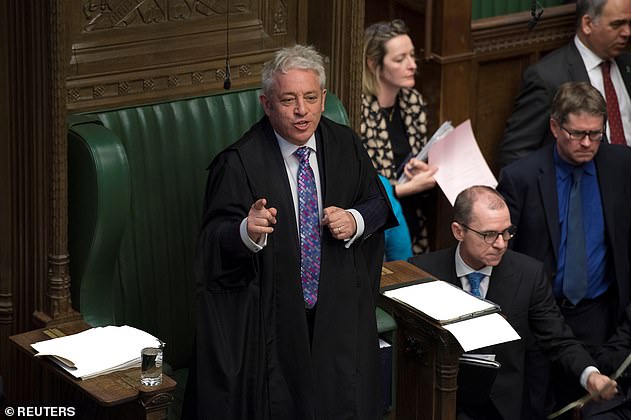 Commons Speaker John Bercow (pictured) has caused fury by allowing Labour to table a Commons business motion, which would normally be the preserve of the Government

A cross-party coalition of opposition MPs wanted to seize control of the House of Commons later this month in order to give them time to potentially pass a law against the UK leaving the EU without a deal.

The bid, led by Labour leader Jeremy Corbyn, came after Boris Johnson and a number of other Tory leadership contenders suggested they would agree to a No Deal divorce from Brussels on October 31.

While Remain-backing MPs lost on Wednesday, they will almost certainly try something similar again in the near future, most likely when they know for certain who the next prime minister will be.

Some prominent Tory Europhiles did back Mr Corbyn’s motion but some of their colleagues may well have been keeping their powder dry.

Should a Brexiteer committed to delivering a No Deal Brexit succeed Theresa May in late July then at that point pro-EU Tories may well be more inclined to vote in favour of MPs taking control of the process.

That is likely to be a cause of concern for Tory Eurosceptic MPs given the fact that only a handful of Conservatives would need to switch sides in order to consign the government to a damaging defeat.

Such a defeat would make it incredibly difficult for the next prime minister to prevent a further Brexit delay if the UK and EU still have not reached an agreement by October 31.

There is speculation in Westminster that such a scenario would leave a Tory leader who is determined to avoid postponing Brexit any further with no other choice but to call an early election.

Mr Corbyn’s plan relied on using a complicated parliamentary process but MPs do have another more straight forward device if they want to halt the next government in its tracks and potentially stop Britain leaving the bloc without an agreement.

They could call a vote of no confidence which if successful would bring down the government and likely lead to a snap general election.

‘Under the Article 50 process, on October 31 the UK leaves the EU regardless of whether we do or don’t have a deal in place unless somebody does something to alter that,’ he told the BBC Radio 4 Today programme.

‘If the Government doesn’t bring something before Parliament, Parliament won’t have a chance to take a view on that as things currently stand because we have run out of all the possibilities any of us can, at the moment anyway, think of for Parliament to be able to insist on having a view.

‘I have really struggled very hard to think of every available opportunity and I can’t currently think of any more.’

Tory former attorney general Dominic Grieve said last night he believed the only way to stop No Deal on October 31 may now be the ‘nuclear option’ of bringing down the Government.

He said he would be willing to quit the party and back a vote of no confidence rather than allow the UK to leave the EU with no agreement in place.

Mr Grieve said he was elected to serve his constituents’ interests, adding that ‘No Deal is not in their interests and nor is there the smallest shred of evidence that there is some majority for this chaotic and appalling proposal’.

Labour’s shadow Brexit secretary Sir Keir Starmer vowed not to give up efforts to block No Deal. ‘This is a disappointing, narrow defeat. But this is just the start, not the end of our efforts,’ he said.

‘Labour stands ready to use whatever mechanism it can to protect jobs, the economy and communities from the disastrous consequences of a No Deal Brexit. Any Tory leadership candidate should know that Parliament will continue to fight against No Deal.’

It followed an extraordinary decision by Speaker John Bercow to allow Labour to table a Commons business motion, which would normally be the preserve of the Government. Sir Keir had said the Opposition’s actions were to ‘make sure Parliament cannot be locked out’. But Downing Street warned it would set an ‘uncomfortable and troubling precedent’.

Ahead of the vote, Sir Oliver urged Tory colleagues to back the motion, warning it was the only opportunity to stop No Deal as there were potentially only four weeks in September and October in which Parliament would be sitting.

He said of those hoping to succeed Mrs May: ‘They know they only have to occupy four weeks of doing nothing and we’re out. Although it isn’t a fast-burning fuse, it is a bomb the fuse of which is already burning. If we don’t put the fuse out now, we won’t be able to disassemble the bomb in September or October.’

These are the ten Tory rebels, including Sir Oliver Letwin and Dominic Grieve, who today voted to stop No Deal

Tory MP Lucy Allan yesterday called for her party’s rebels to lose the whip. She tweeted: ‘I do not understand why @Conservatives bosses tolerate this from its MPs.’

Ten Tory MPs rebelled against the Government to back the Labour attempt to block a No Deal Brexit today.

In the Commons debate before the vote, a Labour MP admitted he ‘made a mistake’ by not voting for Mrs May’s Brexit deal.

Gareth Snell said he should have backed the agreement when it was put before Parliament for a third time, adding that he would support a deal in future. He said it was ‘inconceivable’ that MPs could continue to avoid making a decision.

Speaking in the Commons, the MP for Stoke-on-Trent Central said ceramics firms had asked him ‘time and time again’ to back a deal so they could make preparations for the future while food manufacturers wanted him to make a decision so they could ‘get past stockpiling’.

He said: ‘For three times when the opportunity presented itself to me I have not voted for a deal. The last time, in March, I followed my party line that I would not support the deal that was put in front of me – and I made a mistake. On that date I should have voted for a deal.

‘And I will now vote for a deal if a deal is brought forward because it is inconceivable that we can continue with this line of debate where we seek to make decisions we want to make and avoid making the decisions we have to make.’