London: Jeremy Corbyn will resign amid a landslide election win by Prime Minister Boris Johnson that has sparked recriminations inside Labour over the party’s dismal performance and future direction.

Speaking in his north London constituency of Islington, an ashen-faced Corbyn said he would not lead the party to the next general election campaign and would oversee a "period of reflection" that will inevitably lead to the elevation of a new opposition leader. 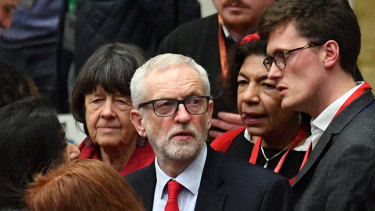 A defeated Jeremy Corbyn, leader of the Labour Party, visits the vote count in his Islington North constituency.Credit:Getty

In a message to Labour MPs who will be preparing to ditch Corbyn's policy agenda, the outgoing Labour leader said the social issues facing Britain "won't go away" and the "fundamental message about Labour and our society" would remain.

The party's pro-Remain shadow Brexit secretary Keir Starmer, a former Director of Public Prosecutions, is a frontrunner to be elected leader but will face stiff competition from shadow business secretary Rebecca Long-Bailey.

A major exit poll predicts Johnson's Conservatives will nab 368 spots in the 650-seat House of Commons, well above the 326 needed to win government outright and a major improvement on the party's performance in 2017 under Theresa May.

Such a majority would be the biggest Conservative win since Margaret Thatcher's in 1987.

In another surprise, Liberal Democrat leader Jo Swinson lost her seat of East Dunbartonshire in Scotland.

The poll suggests Labour will win just 191 seats – its worst result since 1935. The Liberal Democrats would only pick up one seat to command 13 seats, and the Scottish National Party would improve its standing with 55 places.

The exit poll accurately predicted the outcome of four of the last five general elections.

Early results from key seats in middle and northern England show a double-digital collapse in the Labour vote. Blyth Valley, a seat that has been held by Labour since 1950, fell to the Conservatives after the opposition's vote plunged by 15 per cent. Labour's losses appear to less substantial in London.

The decisive result threatens the future of a number of high-profile MPs, including the Liberal Democrats leader Jo Swinson. 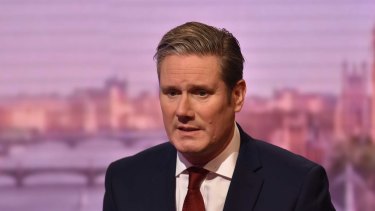 "This was the Brexit election. We were hoping a wider range of issues would cut through in the debate.

"I believe we are in the centre-left, I think the centre is exactly where we are. I think this was a Brexit election."

A Conservative Party victory sets the clock on the UK's departure from the European Union.

Originally slated for October 31, the House of Commons blocked progress on Johnson's withdrawal agreement, forcing an extension until January 31.

Former Liberal Party federal director Brian Loughnane described Johnson's win and Corbyn's loss as "the most decisive expression, so far, of the changing ground of support for centre right parties and the alienation of left parties from their traditional base".

The Conservatives were propelled to likely victory with the assistance of several Australian political operatives who helped Prime Minister Scott Morrison pull off his upset win at the May election. The overall UK campaign was run by 35-year-old former Liberal Party deputy director Isaac Levido, a protege of pollster Sir Lynton Crosby.

John McTiernan, a former top advisor to Tony Blair and one-time director of communications for Julia Gillard, described Corbyn as a toxic presence who had dragged down Labour's vote.

"This is Corbyn's defeat," McTiernan said. "He was the leader. It was his strategy and his policies. Corbyn and his far-left policies have been decisively rejected and he should go and go now."