The High Court has paved the way for women who were injured by defective pelvic mesh implants to make compensation claims against Johnson & Johnson, rejecting an application from the pharmaceutical giant for special leave to appeal against a Full Federal Court ruling.

It was the second attempt by the company to overturn a 2019 ruling of Federal Court Justice Anna Katzmann, who found Johnson & Johnson and its related companies engaged in misleading conduct and the risks of the devices were “known, and not insignificant”. The Full Federal Court rejected a challenge to Justice Katzmann’s decision in March this year. 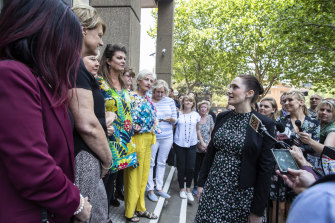 Lawyer Rebecca Jancauskas standing with a group of women who were involved in the class action after the court win in 2019.Credit:Louie Douvis

In March 2020, Justice Katzmann ordered the company to pay $2.6 million in damages to the three lead applicants – Kathryn Gill, Diane Dawson and Ann Sanders – in a class action joined by more than 1350 other Australian women.

It is estimated more than 11,000 Australian women have been injured by pelvic mesh implants, which were used to treat stress urinary incontinence or uterus prolapse after childbirth.

Carina Anderson, who has lived with “unbearable pain” and paralysis in her legs for nearly a decade after a mesh implant, said the ruling meant women like her were believed.

“Today’s win is acknowledgment of 10 years of suffering. It tells me and other mesh-impacted women that we have been heard,” she said. “We are still a long way away from the end of our battles, but we are a step closer to holding Johnson & Johnson to account.”

The class action was launched in 2012 and the trial began in 2017, but Shine Lawyers class action practice leader Rebecca Jancauskas said there were still hurdles to overcome as each woman’s case would now be considered individually.

“Unfortunately for these women, there is no such thing as complete closure until these group members receive their individual compensation, which may take years as [related company] Ethicon and Johnson & Johnson intend to challenge and review each group member’s claim for compensation,” she said.

In a summary of her original 1500-page judgment, Justice Katzmann found Johnson & Johnson and related companies in Switzerland and America, Ethicon Sarl and Ethicon Inc, engaged in conduct that was negligent and “misleading or deceptive or likely to mislead or deceive a not insignificant number” of patients and doctors about the safety and efficacy of nine mesh products.

The court had heard the implants had caused a range of serious complications including chronic pain, infections and damage to surrounding organs.

“All the devices carried risks of complications … against which no adequate warnings were given,” Justice Katzmann said in the 2019 judgment.

She said her decision would “affect thousands of women who were implanted with any of the devices in Australia and who suffered any complications caused by those devices at any time before 4 July 2017”.

In a statement, Johnson & Johnson said Ethicon empathised with all women who experienced medical complications.

“Ethicon is disappointed that it has not been successful in its application for special leave to appeal. The matter will now be relisted before the Federal Court to establish a process for determining group member claims.”