London: Boris Johnson says Huawei's involvement in Britain's 5G network will be reduced further than the current 35 per cent threshold, sending a signal that an ultimate phase-out of the Chinese supplier is likely.

But the British Prime Minister did not say how soon this would happen after being pressed on the issue by former cabinet ministers dismayed the UK is not following Australia's lead in banning the company. 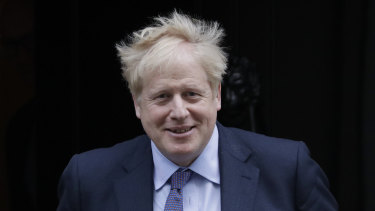 Johnson disappointed his Five Eyes partners, including Australia and the US, by allowing Huawei to continue supplying his country's 5G networks, albeit with a cap.

The issue has sparked a rebellion amongst Johnson's newly minted MPs led by a string of former ministers including former deputy prime minister Damian Green.

Green used Prime Minister's Questions on Wednesday, London time, to ask Johnson why the UK was not blocking the supplier like Australia over security fears. France is building its own network.

"The Prime Minister is conscious about the very widespread concern in this House about the plans to involve Huawei in 5G networks, concern that will only be increased by the news this week that France is building a new 5G network without the involvement of Huawei," Green said. 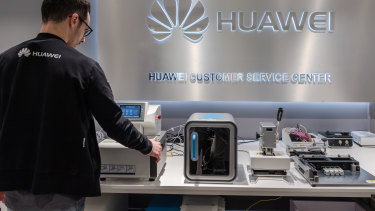 An employee works in the Huawei customer service centre in Brussels, Belgium.Credit:Bloomberg

"If they can do it, we can do it, can my right honourable friend confirm that he wants to reduce Huawei's involvement over time and can he give a time scale as to when that involvement will hit zero?"

"We are going to be reducing the involvement of Huawei below the 35 per cent cap," Johnson told MPs.

"What has happened is I'm afraid a failure of like-minded countries to produce an alternative to the 5G network except that provided by high-risk vendors," Johnson said.

Johnson did not address the time-frame for reducing Huawei involvement and was pressed by another former minister, David Davis.

"The Australian agencies analysed the involvement of any element of Huawei in their 5G system and determined that any involvement would lead to a major risk of sabotage and espionage," Davis said.

"Can he give an undertaking that this country will lead the Five Eyes and NATO to create an alternative to Huawei in the next two years?"

US Secretary of State Mike Pompeo has not ruled out denying Five Eyes intelligence sharing with the UK saying the US will never send sensitive information through a network it does not trust.

But Pompeo has also vowed the US will work with the UK to ensure the safety of their networks.

Vodafone on Wednesday said it would be removing Huawei from the core of its European networks over the next five years, at a cost of £200 million ($384 million).

"We felt it was time to take Huawei out of the core," CEO Nick Read said.

Britain's other major telco, BT, which was the first to use Huawei in its core in the 2000s has said the 35 per cent cap will cost it £500 million.