Washington: Comedian Jon Stewart scolded Congress on Tuesday for failing to ensure that a victims' compensation fund set up after the September 11th attacks never runs out of money. 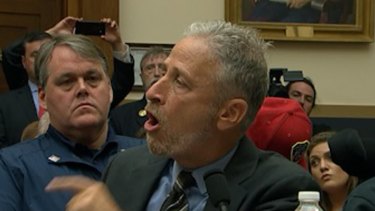 Comedian Jon Stewart is scolding Congress for failing to ensure that a victims’ compensation fund set up after the 9/11 attacks never runs out of money. (June 11)Credit:ap

Stewart, a longtime advocate for 9/11 responders, angrily called out lawmakers for failing to attend a hearing on a bill to ensure the fund can pay benefits for the next 70 years.

Pointing to rows of empty seats at a House Judiciary Committee hearing room, Stewart said "sick and dying" first responders and their families came to Washington for the hearing, only to face a nearly deserted dais.

The sparse attendance by lawmakers was "an embarrassment to the country and a stain on this institution," Stewart said, adding that the "disrespect" shown to first responders now suffering from respiratory ailments and other illnesses "is utterly unacceptable."

Lawmakers from both parties said they support the bill and were monitoring the hearing amid other congressional business.

"I'm sorry if I sound angry and undiplomatic," said Stewart, the former host of The Daily Show on Comedy Central. "But I'm angry and you should be, too."

He berated the lawmakers for what he called their "callous indifference" and "rank hypocrisy,"campaigning on first responders' issues and commending their heroism, yet not acting in Congress to support them.

The fund was most recently reactivated in 2015 as part of the reauthorisation of the James Zadroga 9/11 Health and Compensation Act, which provides health care and financial assistance to first responders, volunteers and survivors. 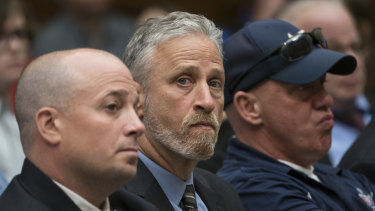 Entertainer and activist Jon Stewart lends his support to firefighters, first responders and survivors of the September 11 terror attacks at a hearing by the House Judiciary Committee as it considers permanent authorization of the Victim Compensation Fund, on Capitol Hill in Washington.Credit:AP

The Victim Compensation Fund was supposed to allow people to submit claims until December 18, 2020, but the fund's leadership said in February it would reduce awards because of "funding insufficiency."

Stewart has been advocating for the Victim Compensation Fund since at least 2010, when he devoted nine minutes of The Daily Show to criticising members of Congress who opposed the Zadroga Act.

White House press secretary Robert Gibbs told reporters at the time that Stewart's activism may have caused "a breakthrough" on the issue.

Stewart did not speak from a written statement, like many who appear in front of committees tend to do. At times, the former late-night host raised his voice. He came close to crying. He begged the committee to take their issues seriously. 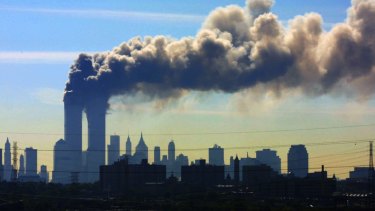 Smoke billows from the twin towers of the World Trade Center in New York after airplanes crashed into both towers on September 11, 2001.Credit:AP

"They responded in five seconds – they did their jobs. With courage, grace, tenacity, humility," Stewart said, tearing up and dropping his pen onto the desk. "… Eighteen years later, do yours."

The first responders behind him rose to their feet, erupting into sustained applause as some lawmakers clapped slowly from their seats.

Representative Steve Cohen, the chairman of the subcommittee, pushed back against Stewart's criticisms to defend Congress as "the bulwark of democracy" and added that other committee meetings take place at the same time.

"Some members are in their offices visiting with constituents, or they may be watching on television, because this is broadcast. … Our attendance was pretty good," Cohen said. "All these empty chairs, that's because it's for the full committee. It's not because of disrespect or lack of attention to you."

Jimmy Kimmel, a popular comedian and host of ABC's Jimmy Kimmel Live!, weighed in on Twitter: "thank you Jon Stewart, for making sure "never forget" isn't just a nice-sounding slogan."

The 9/11 terrorist attacks have always been personal for Stewart, who said in 2001 that he could see the World Trade Center from his apartment in Lower Manhattan. Nine days after the attacks killed nearly 3000 people, Stewart appeared behind his wooden desk on "The Daily Show," stumbling at first to shirk the awkwardness that comes naturally with a late-night comedy show in the wake of the nation's most unfathomable tragedy. "Tonight's show is obviously not a regular show," he said.

Then came an unforgettable monologue.

"Any fool can blow something up. Any fool can destroy. But to see these guys, these firefighters, these policemen and people from all over the country, literally, with buckets rebuilding … that is … that's extraordinary. And that's why we've already won," he said, his voice cracking. "It's light. It's democracy. We've already won. They can't shut that down."